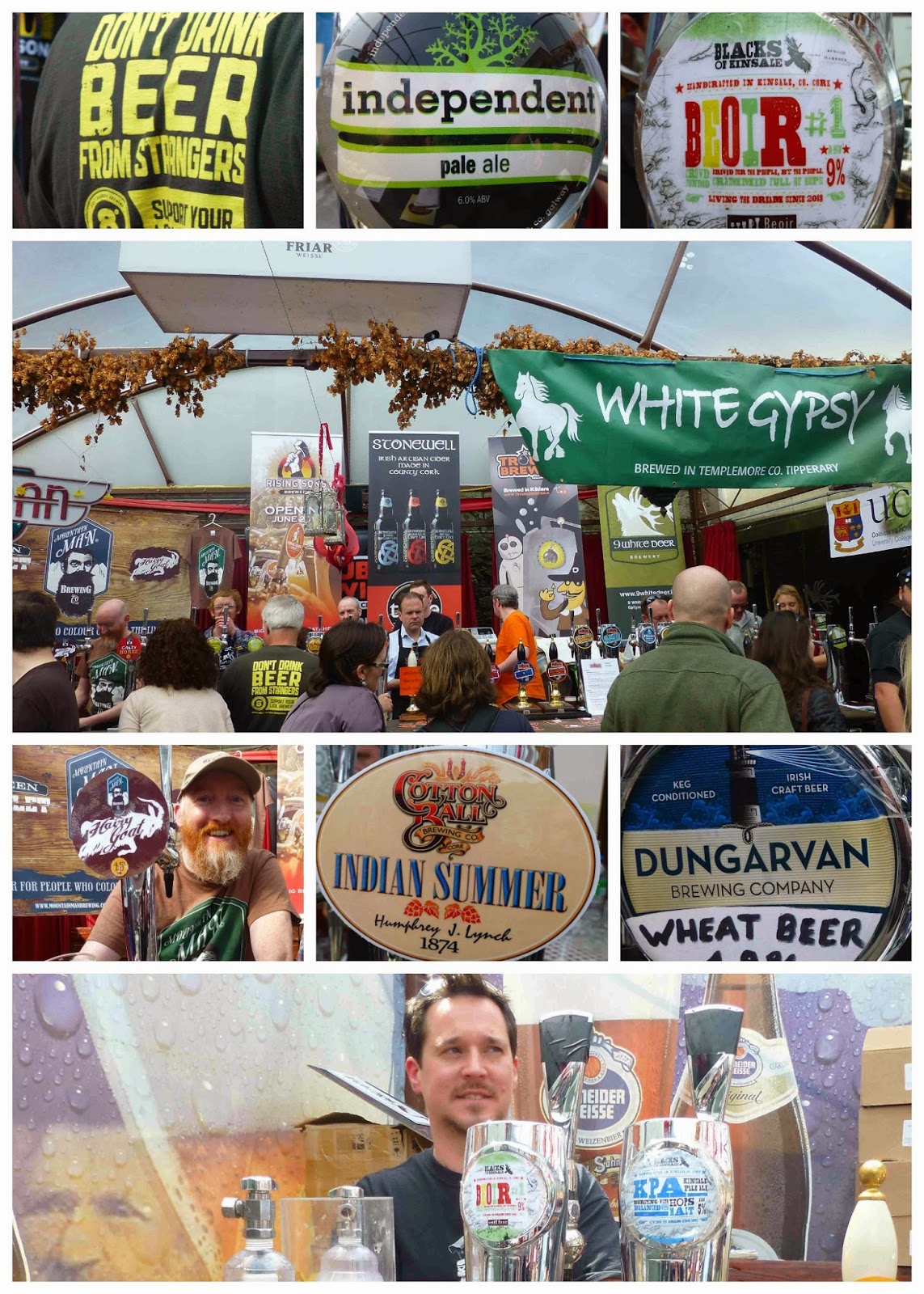 Made an early visit to the Franciscan Well Beer Festival this Saturday afternoon and took my chance to sample some of the newer brews before the crowds started to roll in on this sunny day.

Last year, the Lynch brothers from Mayfield’s Cotton Ball were on the outside of the ring; this time, Eoin and Humphrey were serving their own beers including their latest. This is called Indian Summer and is quite a lovely drink for the days ahead, a mix of lager ingredients and an ale yeast.

Not to be outdone, the now well established Eight Degrees also had new one on offer, the Full Irish, a strong 100 per cent Irish Malt ale. I've had a sneak preview of the publicity shots for this one. X is the letter that springs to mind! Think Full Monty!

Blacks of Kinsale were promising a surprise for later in the afternoon when a special set-up will allow them to add fresh hops (a new one called Equinox) at the very last moment to Kinsale Pale Ale. Can't get fresher than that. Try that and don’t forget to sample their Beoir #1


Great to meet up with Jamie from White Gypsy and his innovative beers. Tried his lovely refreshing Wheat beer, the beer you need after walking round, Bavarian in style but Irish “engineered”. The 5.2% Pilsner isn't half bad either. White Gypsy are growing their own hops this year and are also hoping that more and more restaurants will offer a craft beer as an alternative to wine.

The gregarious Mountain Man was another brewer I had not met before and he explained that his Hairy Goat was an English Style IPA with a lowish ABV. Nothing low though about the ABV of its American cousin, the 7.5% Crazy Horse. Well worth a try. 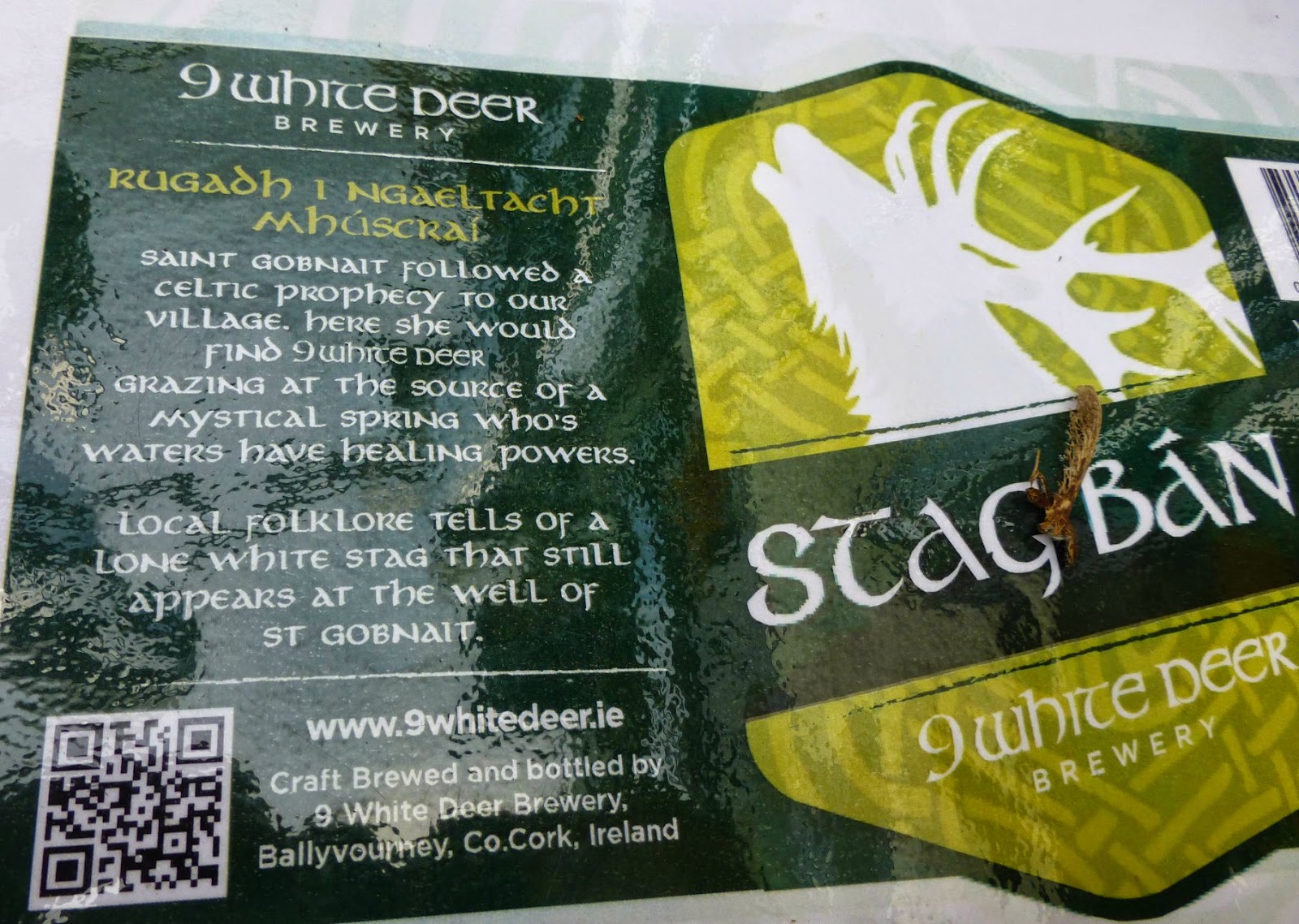 Micro-breweries just keep popping up around the country and next up was JJ's from County Limerick. This was their first outing and the 4.8% Pils lager promised much, especially as this is their very first beer.

aAnd another newcomer, the 9 White Deer Brewery from Ballyvourney, was also making its debut. Gordon Lucey tells me their hops, including Amarillo, Cascade and Fast Gold, comes from all over the world but the "mystical" water is local as is the yeast. This will soon be on sale in 500ml bottles and watch out for other beers, including a stout.

Nice to chat with Caroline of Eight Degrees and also with Claire from Dungarvan Brewing Company. I always enjoy the Dungarvan beers and tried a couple this time: their wheat beer and their Comeragh Challenge Irish Bitter. Had a preference for the former but isn't that what craft beer is all about. Great to have the choice. Long may the craft revolution continue!

The Franciscan Well Festival continues until late this Saturday evening and is on again tomorrow Sunday with soakage provided by the on site pizza maker! Enjoy.

The multi-award winning Franciscan Well brewery is delighted to announce the return of its seasonal special, Coffee Porter.

Shane Long’s vision for the Franciscan Well seasonal collection was to encourage his brewers’ creativity and skill, by challenging them to come up with a spectacular and unique range of seasonal brews.

Paudie Scully was tasked with creating the first seasonal beer of 2014. The challenge facing Paudie was to ensure the perfect balance of ingredients without one outshining the other. This would be a difficult task, as Paudie wanted to create a brew using coffee beans, an ingredient with a particularly robust flavour. Finally, after several trial brews, Paudie landed on the perfect recipe, 10kg of Cork Coffee Roasters Arabica Beans steeped in tank with the porter for eight days at 10 degrees celsius.

The results were superb: a deep chocolate brown porter with rich coffee notes. Franciscan Well’s Coffee Porter is perfectly balanced to deliver a smooth mouth feel with flashes of roasted coffee running through.

Franciscan Well Coffee Porter has a recommended retail price of €6.99 and comes in 0.5L bottles. Available from Redmond’s of Ranelagh, McHugh’s Group, Matson’s of Cork and specialist off-licences nationwide.
April 20, 2014 at 4:25 PM