Beer Tasting (and tips!) at The Kiln 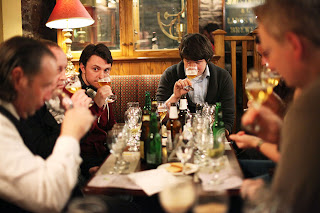 Beer Tasting at The Kiln

The man in the bar had a wine glass in his hand. But that wasn't wine in the glass. He covered the opening with his hand and shook the glass. Taking away his hand, he asked me to smell. As I do so, he said “Toffee Bar”. I agreed. Then he said: “Beamish”. And it was the old Cork favourite, the toffee bar aromas enhanced by the agitation and the shape of the glass.

The man was Marc Stroobadnt, a renowned beer expert from Belgium, sometimes called a beer sommelier, sometimes a cicerone, nowadays working out of London and a regular visitor to Ireland. He was at the Kiln fronting an event called “Beer. It’s only natural”, organised by ThisisBeer.ie


Part of the purpose of the entertaining evening was to show that beer can go well with food. Just a few minutes earlier he had demonstrated exactly that with Affligem, a Belgian abbey beer. First he matched it with cheese and then with a Crème Caramel. Amazing, the beer seemed to adapt and proved a match with each.

In fairness though, the food matching theme was there from the start, with regular beers such as Heineken (Holland), Tiger (Singapore), Żywiec (Poland) and Paulaner (Germany). I like my wheat beers so I enjoyed the Paulaner but I think the one most popular at our table was the Affligem and not only because it was the strongest!

There was a big emphasis too on the fact that all these beers are made from just four ingredients: barley, hops, water and yeast. Then how are they so different? Marc: “Well, you give four ingredients to a team of chefs and ask them to make soup and you’ll see many differences too, as they’ll cook them differently, using different proportions.”

True enough and fair enough. The four ingredients were all on show but Marc and his team were keeping a special eye on the yeast. Someone asked what would happen if she concealed a little to take home and start her own beer. “You wouldn’t get past the door,” said the Belgian. Don’t think he was joking.

So well done to the organisers. No shortage of beer and lots of info on it. Well done to the kitchens at Heineken who came up with many tasty bits for the matching. Very enjoyable overall.

By the way, that website is well worth a visit. It is a hub for beer enthusiasts and those who enjoy an occasional beer and will help you get the best of it. It includes video blogs, beer tasting notes, food matching tips and information on those four ingredients. Check it out here.

Next week, they host the event in Dublin. The venue is 4 Dame Lane and the three dates are 12th, 13th and 14th November. Info and tickets here.