Discover the magic of Barnabrow

Discover the magic of Barnabrow Barnabrow House, a top wedding and Sunday lunch venue, reveals its magic little by little. Driving up the tree lined lane on a dark winter’s night, you might easily imagine a band of fairies at the weak edge of the headlight beams. In the morning, no imagination required, you will see a bunch of friendly donkeys, four generations, including a couple of this year’s foals.

Climb up a little higher behind the house towards the main restaurant, where the weddings are held, and lift your head and you will see a terrific view, over the neighbours in Ballymaloe, all the way to Ballycotton on the coast and its lighthouse winking in the grey morning light.


Imagine this in the Spring and Summer. Then you begin to realise why the fairy of Cloyne based herself here, not that we did get to see the fairy fort. But there is so much else to see here, thanks to the magic, not to mention the hard work, of owner Geraldine Kidd who has been restoring and developing the ancient house and its surrounding acres over the past 16 years.

And the newest magic, and again hard work, is being supplied by recently installed head chef Stuart Bowes. His aim is to make everything on the table “as local, as organic and as fresh as possible”. We saw the motto put into super tasty reality in a stunning meal in one of the dining rooms in the house and you may read all about it here.

As part of a party of journalists and bloggers, we were welcomed warmly by Geraldine and her staff.  As we sipped the mulled wine, she explained that the place had been evolving for hundreds of years. After working in London, Geraldine came to visit Ballymaloe, saw the melons growing in the greenhouse, "an epiphany moment",  and signed up for a three months course.

She added to her cooking experience with a stint in the Arbutus and also worked with Denis Cotter of Café Paradiso and also in Midleton’s Farmgate. She bought it “very cheaply” in the mid 90s. It has proved very popular as a wedding venue.

After a candlelit breakfast, Geraldine and Stuart took us on a tour of the facility, which is on three levels, almost terraces. There are various accommodation units and at the top you have the large room where the weddings are held and directly in front there is a decked area from which you have the views over East Cork. It is an exclusive location and a bespoke service is offered to each bride and groom.

They can cater for up to wedding150 guests and, yes they can stay overnight, not in the house itself but in a dozen or so lodges nearby. And very impressive lodges they are. Can be used by non wedding guests as well. 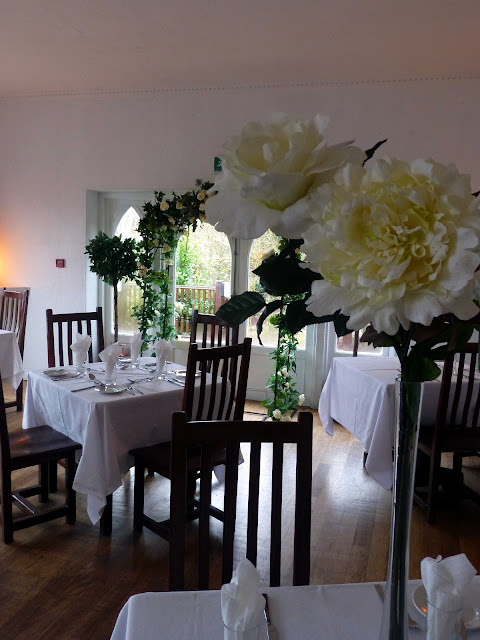 
The rooms in the main house itself are also individually furnished with different styles from traditional to bright and airy with a Mediterranean touch. Ours had its own touches, among them some old suitcases casually on the top of the wardrobe and a packed bookcase.


Indeed, the house itself can be something of a mystery to the first timer. Which door to use? In the room where we dined, you push a door and a bookcase revolves to meet you.


On our walkabout, we were accompanied by the dogs, and saw the donkeys and the walled garden where Stuart can get his grapes, organic purples ones. His know-how and a little pectin is added and hey presto you have a delectable purple jelly! More animals on view, including a goat and also some poultry wandering around. All so natural here. 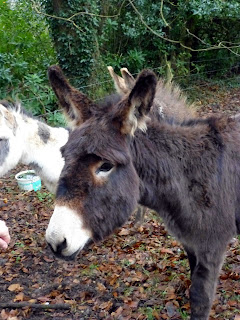 And that about sums up Barnabrow, hidden behind the trees for most of the year. Just another farmhouse you might think but there is a magic at work here, the latest supplied by the accomplished young Scottish chef. Well worth a visit. Or two. One couple with us had been married here a few years ago and enjoyed the return to Barnabrow.
Barnabrow chef country house lunch Stuart Bowes wedding venue

Caroline@Bibliocook said…
Breakfast by candlelight - and those Eggs Benedict - was an unexpected highlight!
November 26, 2012 at 12:23 PM