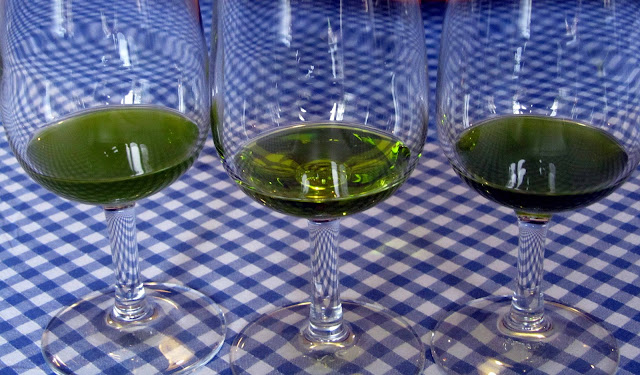 Tuscany is more or less on the northern edge of the kind of climate in which the Olive tree grows and so is very susceptible to changes in the weather, especially the frost which has been known to more or less wipe out the olive rows.

Federico remembered the one in 1985 as a disaster. “The trees had be severely pruned to ground level and it took us all of ten years to get a good crop again.” There were a number of difficulties this year mainly due to the very cold weather in December and this has resulted in an oil that isn’t as green and spicy as normal.

Still, the arrival of the new season’s oils in Tuscany is a big event, according to Beatrice: “It is like a fete and the restaurants mark it by putting on special menus. It is very important for Tuscan cuisine and we always cook with good oil.”

We started our tasting with the multi-varietal Capezzana, harvested a little earlier than usual. Like the others, this was quite a bright green in colour, soft and fruity with a light spice and great delicacy, perfect for drizzling over freshly baked bread and using in dressing for salads.

Just two varietals in the Fontodi, the Frantoio accounting for 80%. Another lovely oil for salads or soups or for drizzling over pastas and salads. David Gleave remarked again that it wasn't quite as spicy as usual, lacking a little of what he termed austerity. I think most of us were maybe relieved that it wasn't as spicy as normal!

The Selvapiana was also neither as green nor as spicy as usual and, according to Federico, was part of a small crop after two bad winters in a row. But it was a lovely viscous liquid with enough of a spicy finish and he particularly recommended having it on toasted bread.

The lunch dishes that followed our “lessons” were a practical and tasty demonstration of the use of Olive Oil in cooking. We started with delicious Pumpkin and Faro Soup with a topping of Parmesan and the Selvapiana oil.

Then onto a light and lovely plateful of Roaringwater Bay scallops with lemon, chilli, coriander and the Capezzana oil. Needless to say, plenty of bread was used with these two dishes.

Pretty full at that stage but still room for a delightful Raisin, Orange and Walnut biscotti served with a knockout Capezzana Vin Santo, a sweet wine that requires much patience and investment to bring to the table. But well worth the wait!

Oh, and by the way, it wasn’t the only wine on the table as we got to taste samples of Fontodi’s Meriggio 2010 (100% Sauvignon Blanc), Selvapiana’s Chianti Rufina 2009 and their flagship Vigneto Bucerchiale Chianti Rufina Riserva 2007, then the 80% Sangiovese Capezzana Carmignano Villa de Capezzana 2007 (91 points on the Wine Advocate) and next the terrific Fontodi Flaccianello Della Pive 2008 (92 points in the Wine Advocate).

Quite a line-up of wines but the focus during the morning was very much on the oils. And it was hard to believe that just a week ago, the olives were still on the plant in beautiful Tuscany.

The wines and the oils are distributed in Ireland by Liberty Wines who have a new website which you may see here.
Ballymaloe Capezzana Cork Fattoria Selvapiana Fontodi Ireland Liberty Wines Olive Oil Tuscany