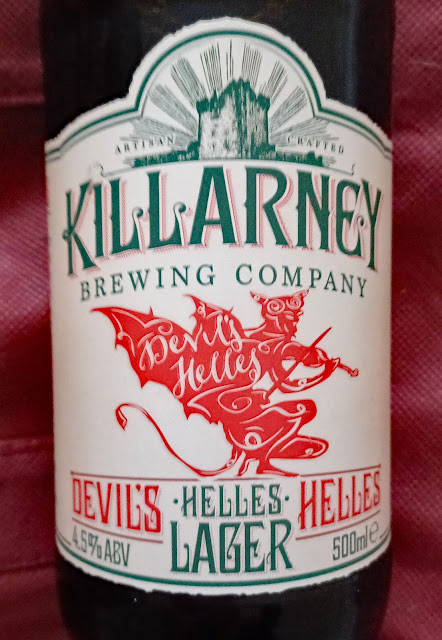 Pale gold is the colour of this Kerry lager, a lager that made a good impression when I first came across a few years back in the Cellar Bar of the lovely Cahernane House Hotel in Killarney.

Killarney Brewing say, fairly accurately as it turns out: we brew it with highest quality German ingredients to bring out a delicious malty and honeyed flavour with the perfect touch of noble hop aroma. Refreshing!

The aromas are mild with both the malt and hops sharing the spotlight. And that harmony continues right through the palate to the refreshing finalé, clean and crisp, balanced and subtly sweet (as a scone is sweet).

It is a German style, often associated with the Munich area where it originated. Try this with a bowl of mussels from Cromane. By the way, if you’d like to try one from the source then the Augustiner Lagerbier Hel is the “textbook-defining Munich Helles” according to Mark Dredge in his Beer: A Tasting Course.

Killarney beers often come with a legend attached and this one concerns a fierce battle between Thor and the Devil. Thor cast down lightning bolt after lightning bolt upon the Devil, who retaliated by tearing up the earth and hurling it back. The resulting basin filled up with water and became known as the Devil’s Punch Bowl.

If you are in Killarney and visit the new premises of the Killarney Brewing and Distillery Company in Fossa, the Devil’s Punch Bowl is just half an hour’s drive away. Indeed, I’m thinking (I haven’t visited yet) that if you are upstairs in the new building you may be able to see it across the lake. 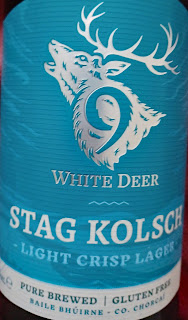 Kölsch is a style of beer, of the lager family, originating in Cologne, Germany. In appearance, this 9 White Deer produced example is bright and clear with a yellow/amber colour. And a soft white head.

The Stag Kolsch, with its high carbonation level and gentle hop character, is palate friendly with an almost creamy feel. Easy to quaff and easy to see how this refreshing gluten free and flavoursome beer (more malty than hoppy) has become quite a seller, widely available in both bottle and draught.

The team in 9 White Deer have certainly cracked the style here. They have brewed with German Nobel Hops, Premium Irish and German Malt and German Yeast. Stag Kolsch gets “an extended lagering time where it can develop and mature into a classic premium European style beer”.

Excellent when quietly sipped in a hotel lounge, or noisily dispatched in the club after a game, or shared while chatting with friends at a barbecue session, this West Cork lager impressively fits the bill.

The Ballyvourney based 9 White Deer Brewery was brought into being by two people, Gordon Lucey and Don O’Leary. They each have a passion for quality beer and, between them, they have a lot of experience in all aspects of beer from growing barley to front of house customer experience and everything in between. More details here. 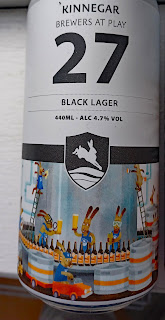 This is the first dark lager from Kinnegar and #27 in their Brewers at Play list.

The brewers have been hard at it even though this series "is all about letting the brewers have some fun and to keep us drinkers on our toes”, and this release is no exception. Rich and dark, with a hearty roasted malt character, coffee, caramel, and molasses make this a serious tipple with its many similarities to stout and porter.

It doesn’t quite have the body of a stout of course but could well pass for a porter. Forget about style for a while and just enjoy this dark gem from the crafty coiníní in the north west. 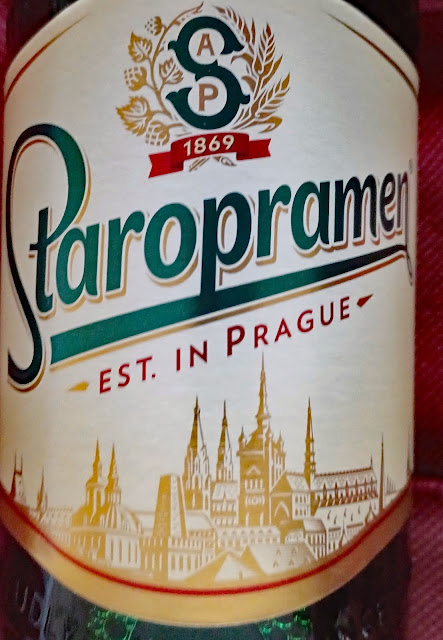 It’s got a beautiful bright pale gold colour with a pristine white and bubbly head, fountains of little bubbles racing towards the top. Aromas speak of malt, hoppy too with a slightly fruity character. And the malt, now somewhat less intense, is also the major feature of the palate. Softly malty with a gentle refreshing finish, that’s your Staropramen.

I can see why I got to like it as I, more or less unknowingly, began making the switch from mainstream to craft. Well balanced, quite refreshing and engaging and a good introduction to better beers ahead. It may well again serve that purpose if you are going from mainstream on the way to craft. But, other than being a pleasant beer, it doesn’t have all that much for the more experienced craft drinker.

The brewery was founded in 1869, according to Wikipedia, “and the brand name Staropramen, literally meaning old spring, was registered in 1911. It is owned by Molson Coors and its products are exported to 37 different countries, mostly in Europe and North America."

They say: Coming from a city of lovable sins that knows everything there is to know about great beer and enjoying life, Staropramen has many stories to tell you – stories about life well spent. Pairings: “Hamburgers are always a great choice for dinner and socialising. A classic is a classic! For an extra touch, add a bit of Emmental and we believe that your friends will be delighted.”

The brewers are quite proud of their barley. “Hordeum vulgare. That’s the Latin name for barley, but there’s nothing vulgar about it. In fact, it is a rather special malting barley we use. We have our own Barley Breeding Group, which works in close contact with our brewmasters. The group selects the barley with the best traits and grows it in our research fields, using only traditional breeding methods.  So considering that Staropramen is made from 100% pure malt—i.e. no adjuncts- it could take some years before we breed the necessary amount of barley. Probably worth the effort.”