Craft journey with IPA, including Cotton Ball’s first can, a go-to session from Whiplash, and the famous duo of Thornbridge Jaipur and Duvel Tripel Hop.

This is a Hazy East Coast style IPA, brewed with Irish malt, hopped with Galaxy (Australia), Columbus (USA) and “our favourite” Amarillo (USA) to give a tropical flavour and aroma. That’s the intro from the Cotton Ball Brewery for their Fury, the first of their beers to be canned (Dec 12th 2022) at the brewery, which is attached to the late 19th century pub in the north-east Cork suburb of Mayfield.

Colour is a dense orange with a fine bubbly white head. Aromas feature citrus, herbal notes too, even a hint of dank. The palate is a pleasure, more of the citrus, plus grapefruit, peach and a hint of resin, all in super balance, all before a very satisfactory finish. Very drinkable indeed.

The Cotton Ball is quite close to me and I often pass it while out walking the dog of a morning. On one of those jaunts, I met Eoin Lynch and he told me, that after a few minor tweaks, they went ahead with the canning of this, just a tiny batch as the machine is no bigger than your average sized kitchen table. He was happy with the outcome and I was happy when he handed me a can to sample and even happier now having sampled it!

This hazy IPA style has, over the past ten years or so, become one of the more popular beer styles in the world, thanks to the juicy exotic aromas and its smooth almost creamy texture, not to mention its bold fruity flavours and low bitterness. The Fury sits comfortably in the range.

Quite a few Irish examples at this stage, including Black’s “Ace of Haze” and Rascals’ "Hazy In Love” and the Heaney New England IPA. An American worth considering would be the Sierra Nevada Hazy Little Thing. Looking for a decent session beer? No shortage but my go-to is this Whiplash Rollover. Murky orange is the colour - no way you’re going to see through this haze - and it boasts a big foamy white head! Aromas are packed with ripe citrus-y fruits. It was our session beer of 2020 and this most recent tasting confirmed it’s as gluggable able as ever.

The quartet of hops dominate the palate. Amazing that this juicy beer has so much hops and still weighs in at less than 4.00% ABV. Quite a concentration of hops then, but all soft and smooth before a lip-smacking finalé.

With its burst of aromas and flavours and low ABV, this is what a session beer is all about and is Very Highly Recommended. 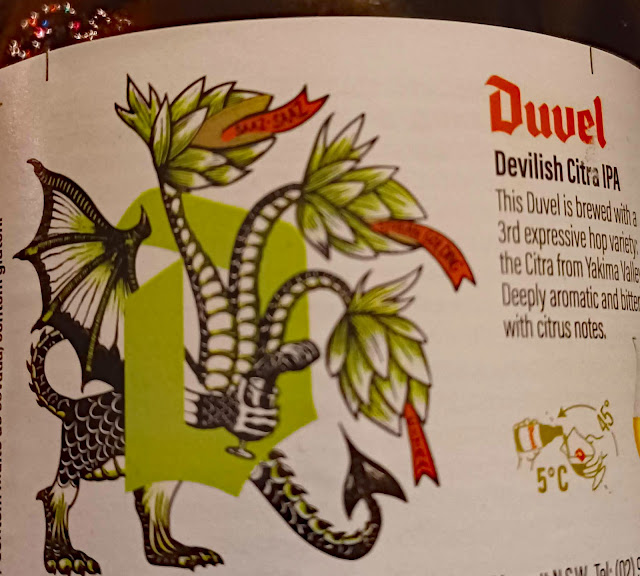 This Belgian beer pours a cloudy light gold, with an attractive white head. Looks like an IPA and smells like one too, citrus mostly with hops there also. Rich concentrated flavours, mostly tropical, flow across the palate, a subtle bitterness in the mix, and a hint of the high alcohol, yet all the elements combine in a very pleasant harmony indeed. An unanimous thumbs up for the folks at Duvel! They sure can make a devilish beer.

The Brewery says they noted the “trend towards more hoppy beers - thanks to our first brews in 2007 and 2010 - was set to continue. This Duvel Tripel Hop will please special beer lovers, while we will continue to ensure that the intrinsic characteristics of Duvel are preserved.”

It was in 2016 that Duvel went in search of the ultimate Duvel Tripel Hop. More than 5,000 fans tasted and voted, and Citra was clearly the favourite. And so they added Citra to the Saaz-Saaz and Styrian Golding already used in their regular strong ale.

Duvel is a natural beer with a subtle bitterness, a refined flavour and a distinctive hop character. The unique brewing process, which takes about 90 days, guarantees a pure character, delicate effervescence and a pleasant sweet taste of alcohol. The Beer Bible lists the Tripel Hop Citra as one of a handful of essential “beers to know” if you are trying to get a handle on IPAs.

The Duvel story though goes back well beyond 2007. It all began when Jan-Léonard Moortgat and his wife founded the Moortgat farm brewery in 1871. Around the turn of the century, Moortgat was one of the over 3,000 breweries operating in Belgium and is still going strong. The beer is still brewed with profound respect for the original recipe and the time it needs to mature. More details here . 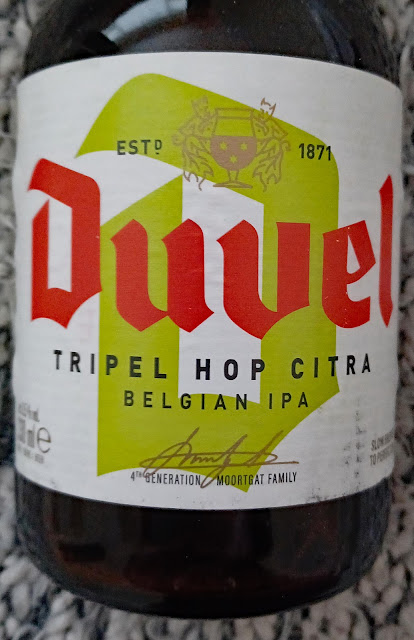 This beauty from the UK brewery, with six hops aboard, wears its complexity lightly and you’ll have no problem sipping your way through.

It has a fairly cloudy pale yellow colour and hoppy aromas (whiffs of citrus and pine). Smooth on the palate, hoppy, citrus notes too, and a beautiful balance all the way to the lip-smacking hoppy lingering finish. Not too much more to say except that this is more or less the perfect IPA.

Match with Thai Curry, they say. No problem, I say, I love my massaman!

Thornbridge, based in Derby, are regarded by many as Britain’s leading 21st century brewery. Not surprised that their award tally worldwide has soared to over the one hundred mark

The complexity of this multi award winning American style IPA is down to no less than the six hops used: Chinook, Centennial, Ahtanum, Simcoe, Columbus and Cascade. Low Colour Maris Otter is the malt used.

They say: Jaipur is our flagship beer, and the one that really put us on the map back in 2005 when we were just starting out.… We are often told “this is the beer, that got me into beer” and we are always very proud to hear this. It’s usually recognised as the first UK craft IPA, and was brewed with a huge amount of US hops at a time where this was very unusual.