On The Pig's Back. 'Cork Fayre with French Flair'

On The Pig's Back.'Cork Fayre with French Flair' 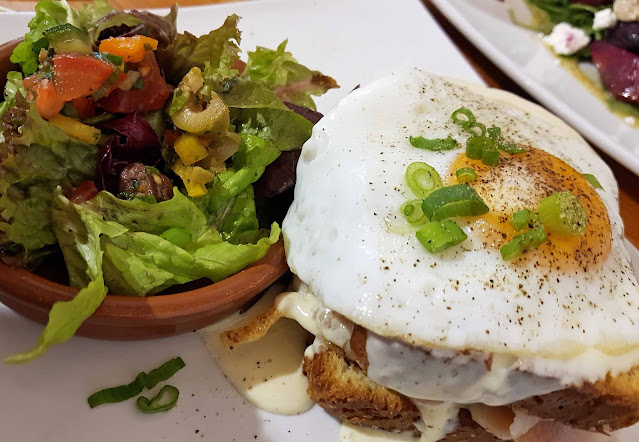 Founded in 1992 by Isabelle Sheridan, On The Pig’s Back has a major presence in the Cork and indeed wider food scene, coupling the best of local produce with an undoubted French Flair - Isabelle is French - as is their motto.

No better way to put it to the test than visit the restaurant in Douglas for brunch or lunch. The menu illustrates the motto very well indeed with local produce from Ardsallagh Goats and Jack McCarthy Butchers often highlighted. It is an expansive menu and I for one could happily eat there everyday for a few weeks without repeating a dish.

When I sat down the other day, having had my covid certificate scanned and telephone number recorded, I had quite a bit of reading to do on the long menu. Found it hard enough to make up my mind but, in the end, went for the Croque Madam (no “e” in the Madam, must be a Cork spelling!). You’ll know there is also a Croque Monsieur but without the egg. So I had Croque Madam on Arbutus Toasted Brioche, with On The Pigs Back Free-Range Glazed Ham, Emmental Cheese and Mornay topped with a Fried Free-Range Egg. Cost, including a small bowl of a superbly-dressed salad, was €12.90, Monsieur (less well endowed) comes in at a euro less. Money well spent I thought; there are pubs in the area who charge much the same for a lack-lustre roast of the day.

It was l’amour at first bite, the delicious ham, the yielding brioche, that super velvety mornay plus the crowning egg and then that mixed salad on the side adding its own texture and the occasional tarty bite of a thin slice of olive. Mornay is an offshoot of the well known Béchamel (widely regarded as one of the five major French sauces, a mother sauce from which others spring) and is distinguished by its cheese element. You get a lot in this dish for your €12.90!

Madame CL also had a choice to make and her pick is a variation on what has become a local classic over the years, beetroot and goats cheese. Full menu title: Oven Roasted Beetroot Salad with Candied Walnuts, Rocket leaves and Crumbled Ardsallagh Goats Cheese.

The description is a bit understated as this was another well executed and lovely dish, again for €12.90. Two different coloured beetroots featured, there was also a beetroot purée an a few beetroot crisps (probably from Joe’s Farm). Never a problem with that excellent Ardsallagh and those walnuts provided the sweetest bite.

The café and deli in Douglas produces a range of delicious food, supporting local food producers, and is also a busy spot for Artisan food shopping, lunch, food tastings and special events, as diverse as art exhibitions, concerts, plays, food festivals & much, much more. Keep an eye on their Facebook page for updates.

They are of course still going strong in the English Market, Isabelle’s original venture. There is no cafe here but you will find Farmhouse Cheeses, Charcuterie, Fresh Breads, Irish Artisan Food, and French Gourmet Food Specialities and more, including some of their own produce such as award-winning Pâté and Terrines.

Add in wines and their very large cheese business and you’ll see that this operation (retail and wholesale) has hugely expanded from that single stall back in the 90s. Check it out here at the website.

Arbutus Ardsallagh English Market Jack McCarthy On the Pig`s Back