Greene's at Christmas. The new menu has a few surprises!

The new menu has a few surprises!

“The Christmas pudding is not what you think,” the server smilingly cautioned as I completed my dinner order in Greene’s.

The MacCurtain Street restaurant had just introduced their Christmas/Early Bird Menu shortly after we had made the reservation. And I began to think, for a moment, of the usual Christmas stuff. Just for a moment though, as I know Greene’s pretty well at this stage and almost always what you get on the plate, while true enough to the words on the menu, is often a surprise and more often than not a very pleasing and delicious one.

And yes that pudding and the spiced beef (we didn't include the Turkey and Ham Terrine in our choices) were a surprise.

The first surprise though was the entrance through the alley Greene’s shares with Cask. It was beautifully lit and there was even an impressive Christmas tree standing at the base of the floodlit waterfall. Covid regulations were applied without fuss and soon we were sitting in a very comfortable position, the rad alongside keeping us warm and our anticipation heating up as we studied the menu.

We picked from the €45.00 set menu, with five or six choices under each heading and also a section of sides. My pick from the “Begin” section was the Monkfish Carpaccio, with fennel textures, orange and seaweed. The dish sparkled under the lights, starry without a filter. It was truly a bright carnival of flavours and textures, the tenderly toothsome fish the stellar delight.

CL meanwhile was enjoying her Traditional Cork Spiced Beef, traditional yes but the accompaniments weren’t and the pickles, Celeriac Remoulade and truffle mayonnaise lifted the ensemble to the culinary heights. We were each off to an elevated start, more sharply aware of the possibilities contained within the sparse words on the menu.

Still, you wonder, what can they do with chicken breast, carrot purée, pancetta, kale and even with Christmassy bits such cranberry and Mulled wine jus? The answer is: a lot. Firstly this is a Twomey’s chicken, noted for its quality, and the kitchen is in top form controlling the temperature from start to finish.

And then sending a beauty to the table. It just looked appetising, more so than usual, it had the “bounce” of a fresh fish (such as halibut) and the taste was all chicken, the amazing flesh enhanced by all that came with it.

The chicken has us talking and we soon found the staff, who glided about the place serving and checking, were just as enthusiastic about it.

There was never a worry about the Braised Feather Blade, a signature dish here for quite a few years now. No shortage of the Angus Beef in its elegant cylinder form topped and surrounded by the gorgeous shiitake sauce and further supported by the smoked mash and the crispy black cabbage and a few fried potato wafers scattered like fallen leaves.

Now for the sweet session. Again, there was quite a choice, including a cheese board that will add six euro to the bill. Mine was the Christmas Pudding Parfait, with apple friand, custard and apple scotch.

Sweet and easy to eat, even after quite a meal (that also included a potato and vegetable side with each mains), this dessert was very appropriate to the courses that had gone before and much the same could be said about our other dessert, the Orange and Cardamon Set Cream Pudding, blood orange sorbet and Grand Marnier.

So having had a superb meal, with its unusual Christmas elements in their non-traditional guises, it was a pair of happy customers that walked out in to the alley, lingering to take a photo or two of the lights and trees, before heading for the mountain! By the way, we did spot Santa Claus on the way home but in a rather unusual multi-coloured coat. 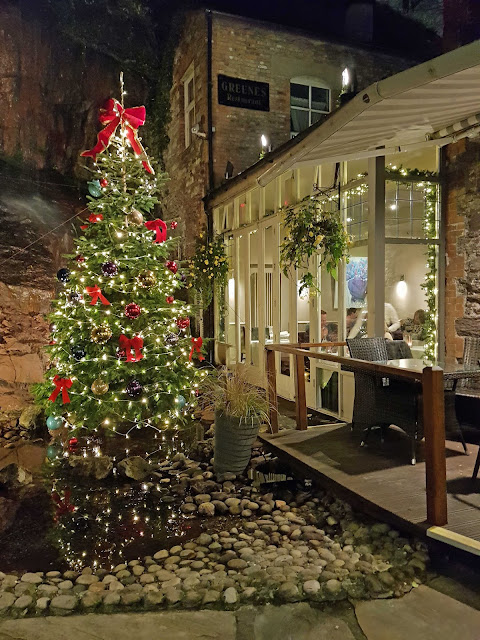