Châteauneuf-du-Pape is in the Vaucluse department in Provence. It is a commune and its castle, now a ruin, has dominated the view of the village since it was built by Pope John Paul XX11 (one of the Avignon popes) in the 14th century. Its wines came to prominence at this time, outlasted the reign of the French popes, and it is now the most famous of the crus of the southern Rhone. 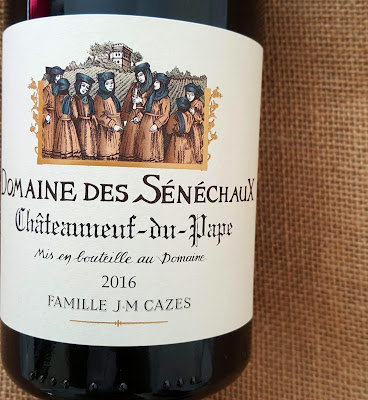 The Cazes family, owners of the famous Château Lynch-Bages in Pauillac, moved into Châteauneuf country in 2006. Not just any vineyard; they went straight to the heart of the region and purchased the Domaine des Sénéchaux, one of the oldest of the local vineyards and about an 8 minute walk from the castle ruins. The parcels that produce this superb red wine are south and south-west facing and composed of quartzite pebbles.

This blend, rounded and unctuous, is made with 60% Grenache Noir, 22% Syrah,17% Mourvèdre, 1% others. A dark and inviting garnet robe. A complex bouquet, cherries and berries, balsamic hints and a touch of spice. Smooth, fruity and spicy on the generous palate. The harmonious finish, with subtle hints of the oak, is elegant and long. The Southern Rhone at its very best, this is Very Highly Recommended. I reckon it would have pleased General de Gaulle, one of Chateauneuf’s admirers.

This complex red is great with “an infinite number of dishes and most cheeses”, according to my well-worn Côtes du Rhone handbook. It also draws attention to the bottle itself: “The very bottle speaks for itself, the glass being embossed with the Papal Arms of the City of Avignon, and the entwined key of Saint Peter! In short, the keys to paradise!”

JM Cazes report that the 2016 vintage went well from start to finish and even that pesky Mistral wind was a help and “did a good job of drying the grapes… well ripened and in impeccable sanitary condition”. The estate also produces fleshy, aromatic whites that reflect the rich characters of the terroir.

That Mistral, a regular feature here (Mont Ventoux means the windy mountain), was particularly nasty in 1956, blowing for three weeks with wind speeds reaching over 100kph and causing the temperature to drop as low as minus 15 degrees. The majority of the Rhone region’s olive trees suffered serious frost damage but the vines resisted so well that many olive farmers turned to vine cultivation.

* This is an excellent wine indeed and the price is high. But there was quite a large deduction (14 euro) during the O'Briens Fine Wine Sale before Christmas.