Vodka but Witch One? Gotta be the Kalak.

Have you not met the Kalak? If you have, you are already under the spell of Ireland's new Premium Vodka.

Kalak is a phonetic spelling of “An Cailleach”, the Irish Celtic Goddess and queen of winter. Kalak was the closest thing the Celts had to mother nature. Her staff, featured on the bottle, controlled the weather. Maybe Jean Byrne should get her hands on that staff.

So, myths aside, what have we got? Kalak Vodka is crafted from Irish malted barley and pure mountain water and is distilled four times (in West Cork). “Vodka with the cobwebs blown off,” says Patrick Shelley, the Tipperary man behind the project. He told me he wanted a vodka that he could drink neat. The palate is rich, almost creamy and, yes, you can certainly drink it neat. 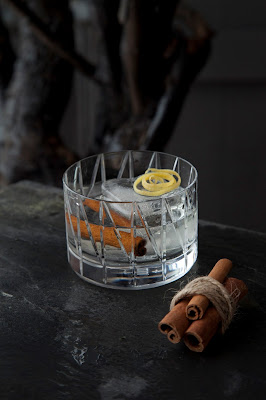 I tried it that way at the recent tasting at the Port of Cork, part of the Sounds from a Safe Harbour Festival, where Bertha’s Revenge Gin and Hyde Whiskey also attracted attention. To get a bit more out of the vodka, to make the most of the smoothness and depth, try it in a tumbler with a large ice cube, a curl of thinly cut lemon zest and a wee stick of cinnamon (pictured above). Now bow to the Queen of Winter, the Kalak.

Maybe here I should bow to the knowledge of Ian Wisniewski, one of the UK’s  “foremost spirits experts”: “Kalak is a great example of a vodka that offers both elegance and range, with a sophisticated, complex character that reveals various details as it evolves on the palate. Kalak also has a great production story that begins with Irish malted barley, which is in itself significant as barley is rarely used to distill vodka.” See Ian’s full tasting notes below.

“Kalak is a vodka with substance…The mouthfeel is remarkable. So soft it’s ethereal. Pure flavours wafting over the tastebuds,” says David Havelin, well known to many of you as @LiquidIrish on Twitter. 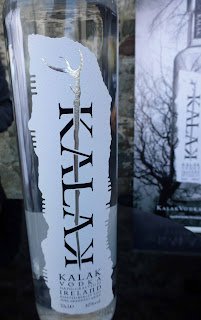 Patrick has funded the entire product / brand development and launch from personal funds. “I was not a vodka drinker until recently, as I found vodka in general to be odourless and tasteless. I wanted to create a vodka that ‘I’ could enjoy, one with taste, character and depth as well as purity and smoothness. If nothing else, I have at least found a vodka I can enjoy with Kalak!” And, may I add, so have I.

Kalak Vodka is available in the Celtic Whiskey Shop, Dublin, and in Bradley’s, Cork,  RSP : 44€. For other stockists, please visit www.kalakvodka.com

Kalak was awarded Silver medal in the IWSC (International Wine & Spirits Challenge) in 2015.

Kalak was selected as one of the 100 hottest new international brands by Cocktail Spirits Paris in June 2015.