Here’s a heads-up if you like to eat out. Five restaurants, five chefs, one meal, one venue. It’s all happening during the Waterford Harvest Fest the weekend after next, from the 11th to the 13th of September.

That meal will be served five times, once on Friday, three times Saturday and once on Sunday. See all the details here. Venue is a big marquee on the Mall, alongside the Waterford Glass complex. Based largely on local produce, the meal is high quality and very good value.

I had a sneak preview in La Boheme, one of the participating restaurants, during the week and can vouch for the quality. The midday rehearsal proved that when produce of high calibre meets chefs of this skill, all focussed on making this a memorable meal, then you are on a winner. 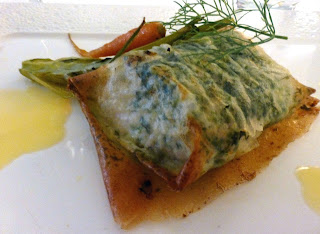 The chefs (including three from France) got on very well together. The other restaurants involved in the meal are Loko,  Zak’s, Bellissimo and L’Atmosphere.  Get those tickets before they are all gone!
The dress rehearsal began with Grantstown Nursery Local Tomato Gazpacho with Blackwater Gin, delicious when slipped slowly through the provided straw!

On then to the gorgeous starter: Tom Cleary & Ballybeg Greens, Beetroot Salad, Candied pecan, and Knockdrinna Goats Cheese. Colourful and overflowing with flavour. The five in the kitchen obviously knew their stuff!

And the collaboration just got better with the fish dish. Never had hake like this before: Dunmore East Hake “Pastilla”, fennel & leeks, Dillisk and Lemon Butter. An amazing innovative combination of impeccably matched flavours and textures.
And then came the meat: Slow Cooked Forequarter of Lamb, raisin, braised white turnip with cumin, potato fondant, natural jus. I often consider the small things on the plate, the turnip in this case. It was perfect and indeed so was the whole dish, the lamb itself a tender delight. If the small things are right, then generally so too are the bigger elements.


And it was the humble granita that caught my attention in the Trio of Desserts: Black Forest Verrine, Meringue Souffle, Muldoon Chiboust & Lime and Basil Granita. That little glass of granita was packed with aroma and flavour, emblematic of the dessert as a whole, a lovely end to a lovely meal. Book those tickets folks!


While this particular Festival event highlights five restaurants, the others (25 or so in all) are helping behind the scenes. Eat Waterford is a collaborative initiative by the restaurateurs of Waterford City, and is aimed at helping food lovers to find the best places to eat in Waterford. The friendly walkable city has a variety of cuisines, from French, Asian, Mediterranean, Irish and beyond. Try something new today, Eat Waterford.

Waterford served up on a plate at Waterford Harvest Festival
With a tasty, jam – packed programme of events scheduled for Waterford Harvest Festival (September 11th to 13th), an exciting collaboration of Waterford restaurants is flying the flag for local producers.
The premise of this year’s Harvest Festival is Waterford Food Heroes and “EAT Waterford”, a collective of Waterford restaurants and hotels will champion the best of local produce.  Set in the Marquee on the Mall, in the heart of the Viking Triangle, diners will be able to enjoy a five course tasting menu, prepared by the participating restaurants using fresh, seasonal ingredients, sourced from local producers.
Paul Power, Head Chef with Waterford’s Bellissimo Restaurant, a member of EAT Waterford, outlined the group’s food philosophy and how EAT Waterford is committed to shining the spotlight on Waterford as a burgeoning food tourism destination.
“The last ten years have seen an exciting, passionate food movement in Waterford.  There has been the development of a food philosophy that values local and regional produce and from that ensures the best dining experience for customers.”
“Waterford and its surrounds are spoilt with a fantastic array of great growers and producers and, of course, natural resources, so there is no excuse for restaurants to provide sub-standard dining experiences.”
All of the EAT Waterford restaurants are ardent supporters of artisan producers and there is currently an exciting cohort of such producers in Waterford.  The home of the blaa, rashers and even the humble cream cracker has inspired a generation of local producers of great meat, seafood, breads, vegetables, beer and spirits.
“In the last decade, Waterford producers, growers, chefs and restaurants began to sing from the same hymn sheet.  Working in tandem, from grass roots level to the dining table, has resulted in a more enjoyable, positive, memorable experience for diners in Waterford city.”
“EAT Waterford was formed earlier this year to harness local restaurants that adhere to a similar food philosophy and those that recognise the value of working together to raise the profile of our vibrant restaurant scene.”
The EAT Waterford Marquee on the Mall takes place throughout Waterford Harvest Festival with sittings at 7pm on Friday, September 11th, 1pm, 5pm and 8.30pm on Saturday, September 12th and 2pm on Sunday, September 13th.
Participating restaurants include Loko, La Boheme, L’Atmosphere, Bellissimo and Zak’s Restaurant (Athenaeum House Hotel) and tickets can be purchased at www.theatreroyal.ie
Not only will Waterford Harvest Festival be the home of the Marquee on the Mall dining experience, there is an emphasis on all things fun, food and family.
The wide and eclectic programme of free events for all includes the Festival Market on the Mall, Farm to Fork, The Big Taste, Enterprising Food Market, Trad Craft Corner, Harvest Time in the Garden, The Ballybricken Festival Fair, Harvest Kitchen, Picnic and Play in the Park.
This year’s festival promises a congruence of sights, sounds, tastes and aromas with cookery demonstrations, foodie films, tastings and workshops, all making Waterford City one big street party for Harvest weekend.
All roads lead to Waterford from September 11th to 13th
Bellissimo Blackwater Distillery EAT Waterford L'Atmosphere La Boheme Loko Waterford Harvest Festival Zak's