We are high on a hill on a farm in Lowertown, Schull, County Cork, and have a 360 degree view.

Looking out to the Atlantic we have a splendid view. It is the last day of August and here, as it often is, the sky is clear and we can see, to our right, the Sheep’s Head Peninsula and the long blue of Dunmanus Bay; Dunmanus Castle (near where there a sea urchin producer operates); we can see, to the left, all the way over to Cape Clear island. Beyond Sheep’s Head, Hungry Hill, blue/grey in the distance, rises into the sky on the Beara peninsula (where there is an abalone producer).
And, if we shift position a bit and head towards the pure bred Connemara ponies on a neighbouring farm, we can even spot the Fastnet Rock in the distance.

Behind us, the mountains, including Mount Gabriel, match the sweep of the sea in front of us. And immediately below and around us, lies the farm where Walter and Josephine Ryan-Purcell raise their pigs and goats, soon to be joined by a Dexter cow or two; here they grow their vegetables and do much more besides.
In the mountains, you note the ridges of rocks crowding together like the bonhams feeding! The pattern is repeated as the rocks continue through the farm and onwards. On the farm, the gaps get a little wider, allowing some grass to flourish, but still narrow, and the gaps get a little wider (sometimes the width of a decent field) nearer the coast. There are some good fields in the vicinity but this farm is not so lucky. Still, the rough land, bushy and scrubby and sometimes marshy, is an ideal spot for the chosen animals. 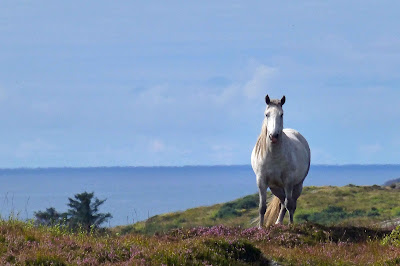 It is an open farm and a  lovely place to visit but the open season has just ended and so you’ll have to wait until next summer. There were some visitors on the final day and their small kids were entranced by the goats and the sheep, mostly by the ten piglets that Decker had produced just three days earlier.


Decker and her pal Black (who is due to give birth to her litter any day now) are Duroc crossed Large Black while the dad Bubba is an Gloucester Old Spot. We also met Ginger and Biscuit, a happy pair of pure Tamworth pigs.


Decker’s recent litter has put the spotlight on the pigs but it is the goats that have and are a symbol of Loughbeg Farm, more or less since Walter and Josephine settled here less than ten years ago. So Mabel, the matriarch of the herd and the best known goat in West Cork as she appears on all their labels, may be feeling a little put out. But not a bit of it. She was in good form as were the rest of them. Walter told me they hope to have 14 goats milking next year.


But, for all the animals, Loughbeg is now best known for its bread, for its Oat Bread in particular. Loughbeg benefited from the Supervalu Food Academy and now you can find the hugely popular loaf all across Cork and Kerry. And maybe further afield in the near future. And if you do come across it, ask too about the delicious Oat Tea Break (soaked in tea and cider!). 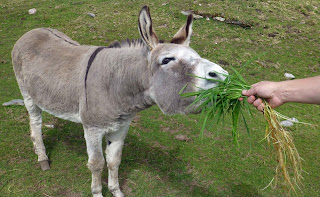 Such has been the success of the Oat Loaf this year that Loughbeg now employs nine, including six full-time. Walter hasn't had as much time to concentrate on other aspects of the farm including his Loughbeg Watering System. He is developing this using drainage pipes with slots for his pots and the water in the pipes keeps the plants irrigated. He never stops! And neither does Josephine. As we were galavanting around the farm with Water and Munich based food writer (and translator) Natascha Afanasjew, Josephine was getting hundreds of loaves of bread packed.

We finished up with a lovely lunch of local produce. The bread and the brack featured, of course, as did some of their own chutneys, ham from Gubbeen, tomatoes and cucumbers from their greenhouse, and cheese, a new one, from Sean O'Brien of Ballingeary. Lovely food and good conversation.

We were joined for lunch by Bruno, here to improve his English and, like Natascha, staying in a newly built cottage on the farm. You may rent a room or rent the cottage, check it out on Airbnb, and then you can really take your time as you take in the fabulous views and indeed everything else that goes on in this remarkably productive piece of West Cork.