Meitheal on the Mall. EAT Waterford.

Waterford, Ireland's oldest city, has probably seen many a meal in a tent over the centuries but the weekend event in the Marquee on The Mall highlighted local produce and we were treated to five courses of delicious food, all prepared by a meitheal of local chefs and a big crew of helpers.

Indeed, the whole Harvest Festival, which ran from Friday to Sunday, had local produce at its heart as producers in the various markets, SuperValu with their food academy, bars who had no shortage of craft beer and other local drinks (Blackwater gin and Muldoon whiskey for example) and especially the GIY locations around Blackfriars, all embraced the idea of locavoring.

The practice of sourcing locally grown food has much going for it: freshness (so nutritional superiority), better taste, avoids trucking and air transport, biodiversity, and perhaps most importantly, supporting the local economy.


EAT Waterford is an association of 25 of the city's restaurants, restaurants that produce a great diversity of styles based on produce from the local farms and producers and, of course, all that fresh fish from the nearby seas, You’ll see their brochure at many places, including tourist offices, all over the city. Pick one up and you’ll enjoy your stay all the better.


The weekend Tasting Menu in the Marquee highlighted the excellence of both the food and the chefs. Five restaurants were involved in this year's effort and the people that got together to work their culinary magic were Christine and Eric (La Boheme), Stan, Mailo and Kelly (The Athenaeum), Donagh and Daithí (Loko), Arnaud and Patrice (L’Atmosphere), Tony (Bellissimo), and all their restaurant teams. 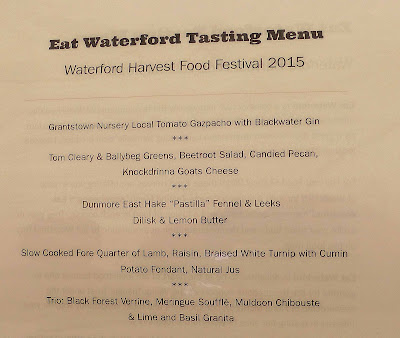 There were six opportunities to enjoy the meal. I came to eat at lunchtime on Saturday and enjoyed it immensely. I still think that the hake dish was the tops but all were excellent and we had a surprise glass of Muldoon Whiskey Liqueur as the finalé. The night sessions were sold out and it looks as if there will be more of them in 2016. A great idea and well done to all at EAT Waterford and to their producers.