September 20, 2015
Harvest Days in Waterford
Visiting the Viking City
Hadn't been in Waterford in a while until we headed east for the recent Harvest Festival. Just ninety minutes after leaving Cork City we were parking in Bolton Street. It was the day before the festival started and we had decided to see some of the city, like any visitor.

First on the agenda was the much heralded Viking Triangle. It is based around Reginald's Tower, the Medieval Museum and the Bishop’s Palace and you can see them on a combined ticket. Amazing collections of exhibits, everything from a 12th century dog’s collar and Brendan Bowyer’s Hucklebuck shoes to exquisite jewelry (12th century) and the sword of a Viking warrior (broken on his death and buried with him).  And don't forget to visit Christ Church Cathedral. It is all on an easy walk.
We started in the circular Reginald's Tower, once part of the town's defences, built in the beginning of the 13th century, with a second phase in the 15th century. It was also used as a mint, prison and military store and now houses an exhibition. Here you will see that broken sword and much more as you wander its three small floors.


The modern Medieval Museum, incorporating the 13th century Choristers’ Hall and the 15th century Mayor’s Wine Vault, is Ireland's only such purpose built medieval museum and the first thing you are offered is an opportunity to try out as an archer! You may also mint coins here.


There is an Art of Devotion Tour (with many statues having been collected from old churches), models of Waterford, the stunning Vestments Room, read (and see) about James Rice and Luke Wadding, see the Waterford ring brooch, the city’s huge involvement in the import of wine and so much more. Check it all out here.


The Bishop’s Palace, the city’s “exquisite Georgian jewel” starts where the Museum leaves off and brings us right up to date. It houses a lovely cafe, where we stopped, and here you can have breakfast, lunch, morning coffees and afternoon teas, even private functions.


You enter the tour via the Garden Hall and its beautiful fireplace. Portraits and another magnificent fireplace decorate the Grand Landing. Later, see the 18th century painting of the city. Read about General Thomas Francis Meagher.  And bacon problems in the 1890s.


Here you will see old Waterford glass, including the Penrose Decanter (the oldest surviving piece), the John Redmond/Ballybricken room, stories of the First World War (read about 14 year old John Condon, the youngest soldier to die in WW1)  and wars nearer home. Then peace and poverty, and sport of course. And then the better times, the nights of dance and music as you enter the Showbands Room and see those white shoes!

That night, following a gorgeous dinner at La Boheme, we met Nollaig Brennan at Downes Pub, an old rambling building (even contains a squash court). Here in the snug, we sipped the local Metalman Pale Ale and were introduced to the pub’s own whiskey, Downes’ No. Nine, smooth as the darkness slipping into the narrow streets outside but much warmer!

Busy too the following day with a visit to Waterford Crystal. By Friday lunchtime, the Harvest Festival had started in earnest and there were stalls in virtually every square around the Mall and the Viking Triangle. 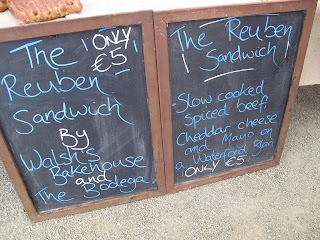 We were looking for a snack after the visit to the Crystal factory and found it in the Enterprise tent where Walsh's Bakery and the Bodega had combined in a Reuben Sandwich, well maybe a Reuben-ish one. In any case, the spiced beef in the local blaa was absolutely delicious. Other stalls around were offering exotic foods with Portuguese, Kenyan, Polish and more available.


The threatened rain arrived later in the afternoon and we headed out the road to the Ardkeen Superstore, on the face of it a normal supermarket. But inside you'll see that a high proportion of the offering is from small artisan producers and we picked up some nice things there.


That evening saw us head out in the rain to the Bodega. The warm colours, the buzz and excellent food inside soon warmed us up.


The sun shone the following morning and the crowds were out in force, walking around the stalls and sampling. We followed suit of course and had a lovely conversation with Maire Power, the Sea Gardener. She has some interesting produce and after a few tastings, we bought some of her Mushroom and Olive Caponata (with seaweed), some bars (including my favourite Coconut and Lime) and a wee bag of Dillisk!

Also had a chat with Jeni Pim, busy volunteer (husband Nigel was helping out too) in the GROWfest Demo Tent in Blackfriars. Time too for a coffee at the excellent Momo cafe.Then we took a break from the busy streets to call into Christ Church, which houses the tomb of James Rice - quite a story!

I had seen in the week previous two big organs, one at St Luke’s in Cork and the other at St Coleman’s in Cloyne. But the one here certainly caught my eye as it looked so well. This is the Elliot Organ, restored in 2003 after vandalism, at a cost of some €300,000 euro! Now it is in regular use for services and concerts. Read all about the cathedral and its history here.
Our visit was now drawing to an end. But we had  a lunch date before departure, guests at the EAT Waterford meal in the marquee on the Mall. After that, just time for a quick browse through the stalls on the Mall and a call to Mag of Goatsbridge to buy a few of her tasty trout products. Back to the car then and, with traffic light, we were back in Cork in an hour and a half, bags full and bags of happy memories too!