Hyde No. 1 President's Whiskey. Reaches Maturity In The Mild West

“Casks have to be treated with care, almost like plants,” said Conor Hyde MD of Skibbereen based Hyde Whiskey.

The Hydes (Conor, his brother Alan and nephew Peter) have been getting used to handling used Oloroso casks over the past few years. “There is still some sherry inside when we get them. And then we have to water the empty casks every few days, so that they won't dry out and fall apart. You don't want that happening as they are expensive.”

And he told me that the casks can be dangerous too. You need to be careful extracting the bung, especially on hot days as it could shoot out and do damage!

Their first whiskey, the double distilled President’s No. 1 Cask Single Malt, is based on a ten year old Cooney whiskey (aged in Bourbon casks), and is aged further by Hyde. “The ten year old is a very good base and our intervention improves it and gives it an extra twist”.
The Hydes had no previous whiskey experience when they formed the company three years back. Following a pattern of other start-up whiskey producers, they are buying in in the early days with the aim of establishing their own distillery in the near future.

In the meantime, they are concentrating on building a brand and reputation through adding their own touch. Plans at present include a Rum cask finished whiskey in September, a gin in January and a six year old Single Grain Whiskey is planned for 2016.

They have got off to a terrific start with the President’s, finished in the Oloroso casks in their facility in Skibbereen and distributed by Classic Drinks. “There has been a big thumbs-up from those who have tasted it over the last two months or so. We try to be innovative and we do not use chill filtering.”

He explained that chill filtering can degrade the whiskey. The barley has oils and these oils tend to be lost, to be taken out, by chill filtering. But that is not the case with Hyde and it is appreciated by the connoisseurs. ”You are tasting the true whiskey.”

Whiskey from the cask can be very strong in alcohol and to get it down to acceptable levels (46% in the case of the President’s) water is added. This is known as “cutting” and Hyde’s cut with West Cork spring water, “no messing, no additives”.

He is delighted with the way sales are going at the moment. “The Germans love it for a combination of factors, including the non-use of chill filtering. They are our best market.” The number of countries taking it is rapidly rising towards the twenty mark and includes New Zealand, USA, UK, Australia and Belgium.


It is available in quite a few places locally, including The Oliver Plunkett, Soho Bar and Bradley’s Off Licence. And Cork Airport spontaneously quadrupled the size of their initial order when placing the second. Quite a vote of confidence for the President’s.


So what is all the excitement about? Take a look at it in the glass and you’ll see some additional colour, from its extra time in the sherry casks. The aromas are complex, vanilla, some fruit, spice too. As you'd expect, after all the ageing, it is smooth and well rounded on the palate, creamy almost, the long finish rich and spicy. Overall, it compares very well indeed with other Premium Irish whiskeys. One of this limited edition of 5,000 bottles would sit very well in any Presidential drinks cabinet. 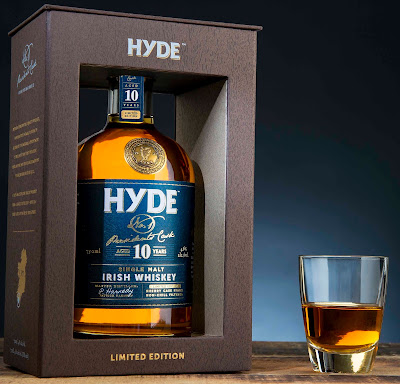