Why Not Take the Dungarvan Brewery Tour!

Why Not Take the Dungarvan Brewery Tour!

Tours to the Dungarvan Brewing Company started last Friday, with Claire and Cormac doing the honours.  It is the first of what is billed as a summer series and you can get further info here.

It is well worth it. The tour caters both for the person with a casual interest in the process and for those with more technical interests. Cormac, who learned the “trade” through his home brewing, is the man for the technical stuff.

He took us through the various malts and hops that they use. Malted barley, for instance, is nothing more or less than barley "soaked in warm water". That is your basic ingredient but then there are various degrees of malting, right up to “roasted”, essentially burnt. This latter has a coffee taste and aroma - you do get to touch and taste it - and is used in their stouts, concluding my favourite Coffee and Oatmeal, a winter stout.


He explained the use of hops. Hops used early in the process is mainly for bitterness while it increases flavour when added in the later stages. Challenger is their basic hops but they also use the well known (and much in demand) Cascade with its more concentrated flavours (which means you use less of it).

Claire, one of two accredited Beer Sommeliers at the brewery (husband Tom is the other), then introduced us to the company's beers. What a great line-up they have!
Pale Ale fans are well catered for and Claire started with the Comeragh Challenger, a seasonal English Pale Ale. “Floral, light… easy-drinking..” she said. And so it proved.


The Cascade hops are used in Helvick Gold, a regular in the portfolio. This popular Irish Pale Ale is full bodied, generously hopped and “good with seafood”.

Next up was an American Pale Ale style called Mine Head, also featuring the Cascade hops. It has citrusy flavours and is not as bitter as an IPA and is great with food. 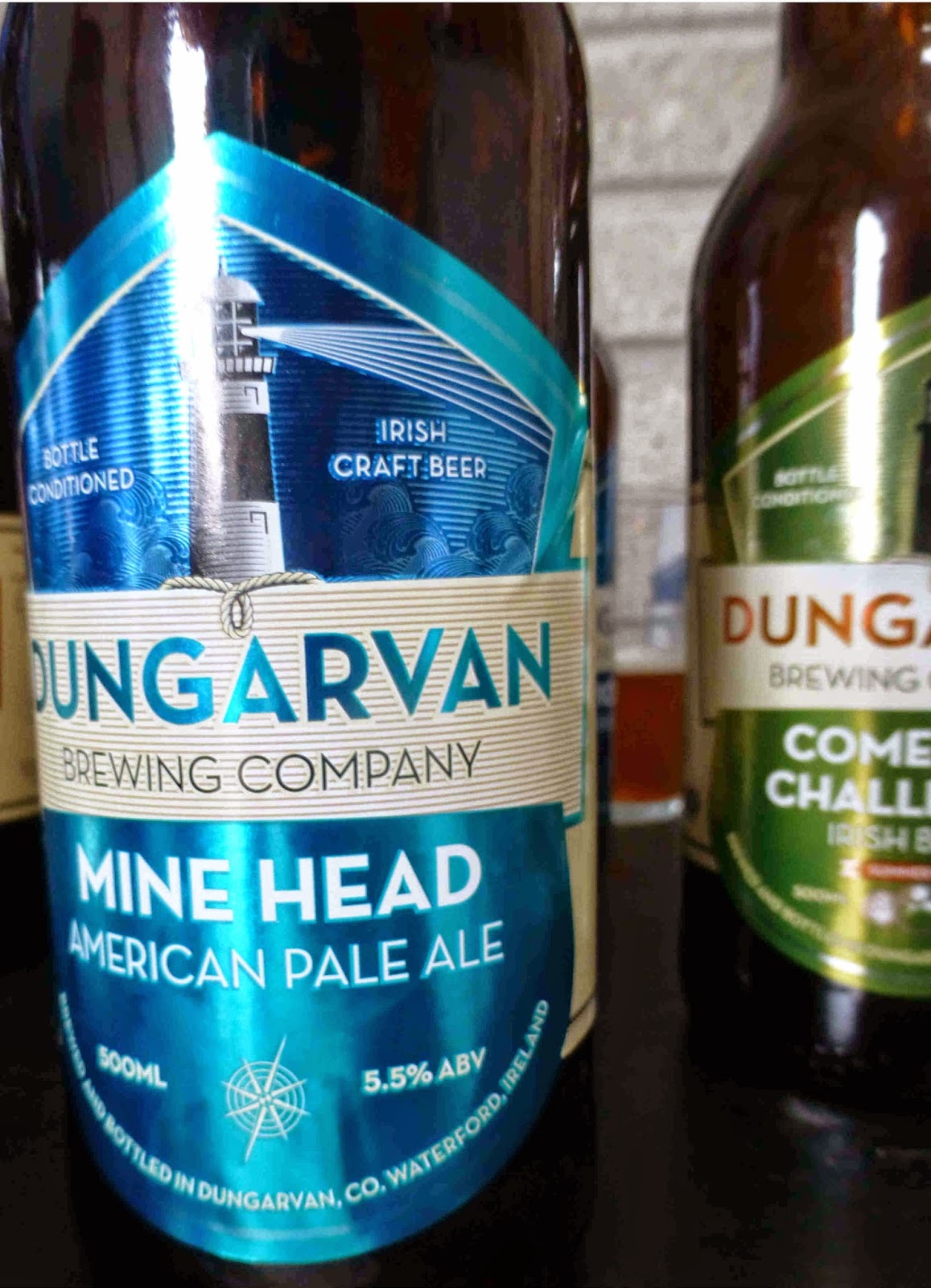 Perhaps the best known of the Dungarvan beers in restaurants is their Copper Coast Irish Red Ale. This will tell you that it is an excellent food beer. And Claire had the perfect match, producing the lovely organic Brewer’s Gold Cheese by the Little Milk Company. This locally produced cheese is washed a few times during production with Copper Coast!

Then on to the Blackrock Stout, a favourite since Dungarvan was founded four years back. Here the roasted malt was prominent and it went very well indeed with the dark chocolate that was handed around and quickly scoffed.

All the beers are traditionally brewed and bottled on-site in Dungarvan, and made using only four ingredients – barley, hops, yeast and water. No chemicals are added to the beers, they are unfiltered, unpasteurised and vegan-friendly. The core range consists of three beers – Black Rock Irish Stout, Copper Coast Irish Red Ale and Helvick Gold Irish Blonde Ale – which are complemented with a selection of seasonal and festival beers throughout the year.

It has been a terrific four years for the brewery and production has been boosted recently, a major factor being the pre-Christmas installation of a mechanical bottling plant (previously, it had all been done by hand!). Now that capacity has increased, so too can the volume and the export market is being explored with sales to Italy, the UK, Scandinavia, Germany and even further afield on the horizon.

The Brewery was the final stop in a "foodie" mini-tour to the east from Cork City. See a short account of the other stops here.