From Button Accordion to Boudin Noir;
Olympic Medals to Normandy Ór;
From Duhallow field to Fade Street Social;
All kinds of balls, not least the oval.
The RIC and the royal Queen’s Pudding;
Animals reared on pastures green and lush.
Wheeling and dealing, fair to fair,
Paring prices, bobs here, pence there.
In the North Cork town, two rivers meet,
Allow and Dallow. The butcher tweets.
From the shop on Main Street's door
Tim broadcasts on Radio Four;
Loma, Coppa and Pastrami,
Outdoing the Italians at Salami.
Five generations in the ancient store.
Heritage, music, meats galore.
Kanturk, past, present and future,
with Jack McCarthy,master butcher.
Since 1892, McCarthy Butchers have been trading in Kanturk. And they won't be stopping anytime soon. The enthusiasm is as strong as ever and so too is the spirit of innovation.

When I called there last Friday afternoon, Jack told me enthusiastically about a new cooking bag they had introduced while, in the back, son Timmy was hard at work making a Biroldo.

The bag, made of high density plastic, is proving very popular. “It keeps the flavours and you can boil or roast or…. People who have used it keep returning,” said Jack. Well, we tried it out that very night. We bought one from Jack filled with strips of steak and vegetables and a red wine sauce. Cooked at a very low temperature it was perfect and gorgeous. No wonder the customers keep coming back for more.
Soon we got a taste of their Sliabh Luachra, an air dried beef for which they were named Nationality Speciality Champions. You may remember that Kate O’Toole featured it as a starter (served with fresh figs and Desmond cheese) in The Restaurant on RTE.

We moved slowly, lingering on the sample bites,  through their other cured meats: the coppa (traditional Italian cold cured, and smoked here), loma (dry cured, made from pork tenderloin), North Cork lard (great for cooking shrimps!), and then we came to a real treasure: the non smoked Pastrami. Special peppers have been used here but the whole thing is something special. This Pastrami is at a different level for sure.

Irish charcuterie has arrived! Obviously, there are quite a few other people working in this area and many are coming up with some terrific results, partly because they are working on great produce. But do give yourself a treat soon and try this magnificent Pastrami!


Jack’s son Timmy has been learning the tricks of the trade in courses in Italy and that is where he got the idea for the Biroldo he was working on. The main ingredients are the meat from the cooked pig's head, shredded of course, blood, spices and herbs. The mix is then poured into an appendix (not kidding!) and slowly cooked again. Looking forward to a sample soon. Should be very very tasty!


Jack McCarthy have won quite a few honours in recent years and really grabbed the attention back in 2010 when he was awarded a gold medal by the Confrerie des Chevaliers du Goute Boudin and indeed the Black pudding overseers from Normandy made Jack a Chevalier. McCarthy’s most recent success on that front came earlier this year when their Pig’s Head Black Pudding with Rum and Raisin won gold, for International Creativity, in Normandy.

That contest was featured by BBC 4 Food and you may listen to a podcast here. 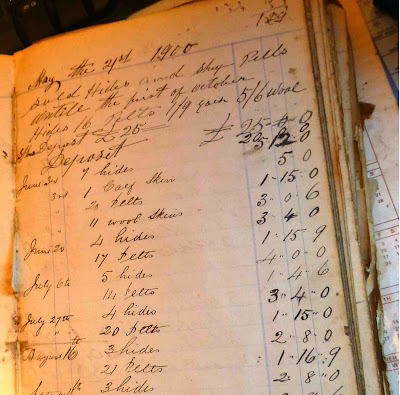 Now that is where I came in. Innovation, Creativity. This a proud Duhallow family. They use the local Castle and Ceann Turc (the Irish version of Kanturk, meaning head of the boar; how appropriate!) on their packaging.


Always looking ahead. But never forgetting the past either. Jack showed me some of their precious ledgers from the early days. Some entries going right back to 1891. The one photographed is from 1900 and you can see they had a thriving trade going on then in skins, hides and pelts. Every bit of the animal was used and it is much the same now. 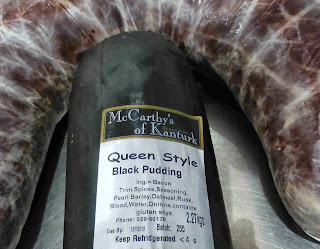 Next time I visit we might concentrate more on the main meats but then again you never know what this pair have in the pipeline and they could well have some tasty new variation to show us in the near future. Watch this space.
Oh, and don't forget to check out their website. Here you’ll find a great selection of beef, free range pork, lamb and chicken and more. If you have a special occasion coming up, then why not check out their Spit Roast Service. And, if you are a young butcher anxious to learn, well they even have a course for you called Practical Pig in a Day Course.

Caroline@Bibliocook said…
You never get out of McCarthy's without tasting your way through their wares! Always a treat.
October 25, 2013 at 12:31 PM