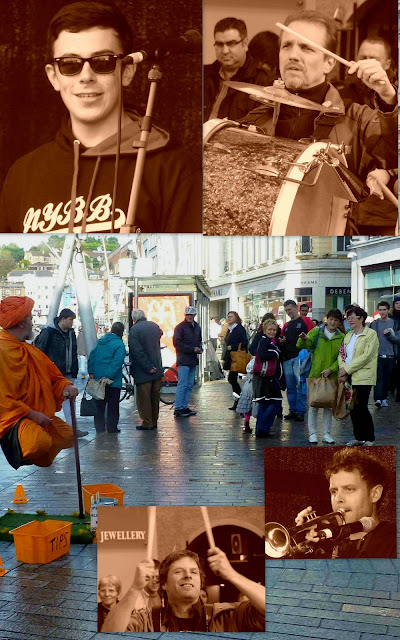 Overheard: Saturday.
A man opening a new bar (the old Phoenix) on Union Quay was offered two Child of Prague statues, blonde and blue eyed of course.
“Why?” he asked.
“You can't open a bar without a Child of Prague,” was the answer.
“Why two?”
“In case the first one breaks.”

The bystander did not report the conclusion but I wonder if the person with the statutes also tried to off load one or two at 6IX (not sure whether that is pronounced Six or Six Nine), another new bar that opened this weekend on the premises previously known as Boqueria. The jazz weekend proved a good time to open for Electric (Happy Birthday Denis and Ernest) some three years ago and they haven't looked back since.

Heard the child of Prague story in L’Atitude to where we had retreated between beats on the streets. Haven't they got a magnificent collection of wines in there many of which come in 75ml, 150ml or 250ml (pichet) size servings.. As a guitarist played in the background we, who drink mainly European,  made something of a round the world trip on their reds: Australia for Cat Among the Pigeons Cabernet Sauvignon, California for Zinfandel, Lebanon for Massaya, and Argentina for Malbec. Favourite was perhaps the Massaya. 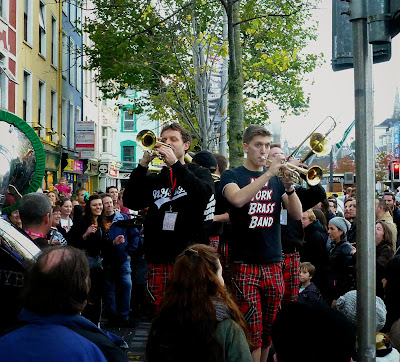 Moved on then to what we thought was a funeral, New Orleans style and starting outside the English Market at 5.30. We were there in good time but no sign of a corpse! Indeed no sign of life until the New York Brass Band turned up to inject massive fun into the proceedings. These guys are not from New York at all but from York in England. Why don't we twin with a town like that and guys like this?

They impressed on last year’s visit and were in top form on Saturday. They immediately commandeered any street furniture with a bit of height and soon had the crowd singing along, spilling out on to the parade and almost stopping the traffic. Great session guys and well done.
And this is all free. Have to say that the organisers put on a fantastic in-depth programme here in the city every year, anything from learning the ropes to impromptu stuff on the streets, to the extensive music trail around the pubs, to the fringe and to the serious (some not so serious) concerts.

Beat ‘n Blow were another band that I enjoyed last season. Saw the group from Berlin walking by the Opera House and followed them up to Paul Street where they put on a typically energetic engaging display in the plaza. They couldn't believe how the weather had changed from the morning rain and really enjoyed the sun and we all enjoyed their music. Great stuff folks. 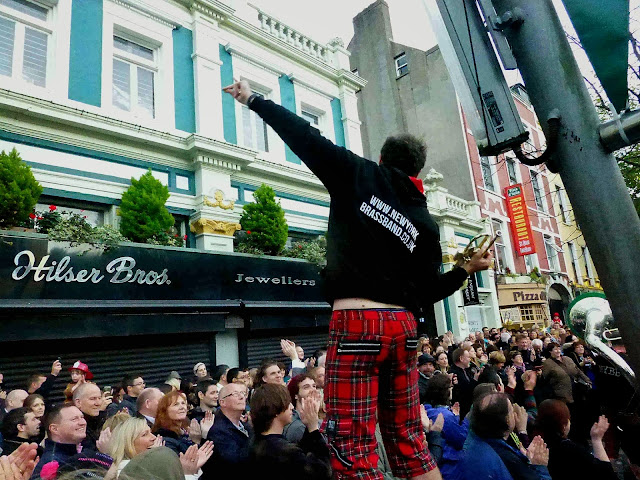 In the meantime, the jazz goes on today and indeed you are sure to see the New York Brass Band and the Beat ‘n Blow on the streets and in the venues. And, as I write this, the sun is out. Let's go down town and blow up a storm!