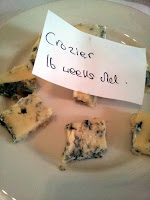 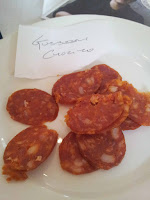 
Close to four hundred years ago, a Swiss called Jean from the village of Trimbach (not far from Basle) left and crossed the Rhine to Alsace and in 1626 the young man, now called Jean Trimbach, founded the wine business that stills bears his name.

Last night in Ballymaloe, his descendant, also Jean Trimbach, took us through four flights of their top class wines and matched them with charcuterie and cheeses made by two of Ireland’s leading food families, the Fergusons of West Cork and the Furno’s of Tipperary.

There was so much went on in the Grainstore last night that I think I will reserve the Ferguson and Furno stories, even if they do not go back to 1626, for future posts. Watch this space – I won’t delay! Well, except for a family wedding tomorrow.


Serious work too he said because of the steep slopes on which the wines are planted. If you don’t watch your step and your bucket while picking, you could well accompany it in a roll down the hill.

The third, the Clos Ste Hune 2004, was a real treat for us. “Just 800 cases for the world. Just beautiful. One of the finest in the world. Collectible. The one to collect right now is 1985.” The match with these three was the Gubbeen chorizo.

Then Jean presented two Pinot Gris, at pains to point out that this was originally a grape from Burgundy and not Pinot Grigio as some people might think. This is fuller, richer, creamier, great with Foie Gras. They were matched with the impressive Crozier Blue (8 weeks).

First was the Reserve 2008, “a bring me home tonight wine and value for money”. Then we had the Reserve Personnelle 2001, which is not produced every year. “This,” said Jean, “was bottled in April 2002 but it looks as if it was bottled yesterday.” It went very well indeed with the cheese.

The next flight was two of the Trimbach Gewürztraminer. Gewurz means spicy, he told us. We first tasted the 2009: “elegance, finesse, focus. Just like the cheese, a beautiful match”. The cheese this time was Gubbeen smoked which also went well with the Cuvée des Seigneurs de Ribeaupierre 2005, a wine deemed worthy enough to pay “homage to the counts of the village”.

Jean explained about Botrytis (the Noble Rot) and praised his brother Pierre, the Trimbach winemaker, as indeed he had throughout the evening, in his management of this dodgy process.

Balance is everything. As the rot sets in, the sugar goes up and so too does the acidity. But at a certain point, they can get out of synch and the winemaker must make his own decision, daily testing, to pick the shrunken fruit at the optimum time. “Sweet yes but think about balance.” I think everyone agreed that Pierre got it right with this pair as he did with all the others.

Next, a surprise as Jean came back to the mike and, accompanied by Ballymaloe’s superb sommelier Colm McCan, treated us to a song. Then we all moved outside to the Wildside Catering barbecue. A superb evening and more about the charcuterie and cheeses in posts over the next few days.

The visit was arranged through Des King and Claire Lomasney of Gleesons/Gilbey Wine Merchants and enjoyed our table chat with them and also with Eileen and Michael Fleming, long time friends and supporters of Jean. 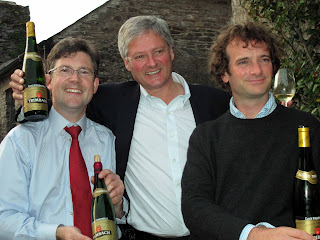 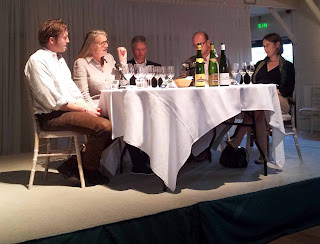