Meet The Producers. All Winners at Blas2017 in Dingle

(This is Part Two on the evening in the bank. See Part One here.)

Bank of Ireland Startups, who helped get the successful Backyard feature off the ground during this year’s Blas Awards in Dingle, hosted a number of follow-up events last Tuesday, including one at their premises in Patrick Street, Cork. Joe McNamee was the moderator for the evening and the principal speakers were Artie Clifford of Blas and local chef Kate Lawlor. After the welcome and introductions, Joe asked Aoife of Galtee Honey Farm  to tell her story.

Aoife was brought into bee-keeping by her father and she said provenance was very important. “Genuine Irish honey has great flavour and complexity. It is because of our great bio-diversity, different flowers, different flavours. The native Irish black bees are under threat and we as a group are trying to preserve them”. 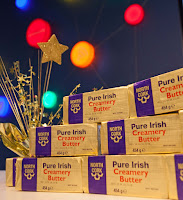 “Labelling is a problem, the public can be misled quite easily. Do check the label. Blas can help with awareness. Quality will cost more so Irish will cost more. This summer was great, we won't be running out of honey before the next harvest.”

Francis, a West Cork man, is with North Cork Creameries. “It is a small co-op, one of the originals. We sell milk and butter under our Kanturk brand and we also supply Supervalu. The butter is available in the Kanturk area and in Supervalus in the region generally.” Joe added that a lot of the milk in the supermarkets is not coming from the cattle you see grazing in the Republic’s fields but from indoor herds across the border. 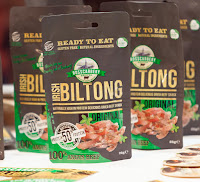 All of the producer speakers were winners at Blas 2017 and Avril, representing Caherbeg Pork, Ross-carbery Recipes,  and, most recently, Rosscarbery Biltong, is no stranger to Blas awards.

Son Maurice is following in her footsteps with the Biltong, a dried beef product of African origin. Indeed, the machines used in West Cork are from Africa. Both Maurice and brother William are big into fitness and that inspired the move. He wouldn't be an Allshire if he didn't focus on quality and he does. Had a taste the other evening and no wonder it won a silver in Dingle. Seaweed and spice have been added and it is a handy and well priced packet.

Avril just loves Blas and Dingle: “Food is at the core of it but the people make it. You are never on your own.”

More butter, but with a twist, as Mary and Billy from Waterford took to the stage with their Irish Gourmet Butter. They are in the early stages of development but still advanced enough to feature in Dingle where their Garlic & Herb stood out. Their butter is flavoured: cranberry and orange and Cointreau (have it with the Christmas pud) and cinnamon and honey (ideal on French Toast) are two examples. They are building on a long family tradition as Granny was an All-Ireland Butter Champion so food is in the family.

Tom Durcan is a spice beef master and the Corkman is a huge supporter of the Blas Awards. “When I won in Blas, I milked it, got great contracts from it. It is definitely the most honest food competition going. To win, or even to be a finalist, opens doors. Do something, do it right, the world’s your oyster. Blas is a fantastic road for anyone in food to take. Great help available there. Thanks to Artie and to everyone involved.”

Sarah from Nut Case hasn't got quite the long experience of Tom but she too acknowledged the value of Blas. Their nut burger won gold this year. “It makes such a difference to us when we call to the shops.” We is Sarah and husband Mick who, in 2006, was made redundant. But he then took the 12-week course in Ballymaloe and they began checking their aunt’s nut business in the UK.

They started Nut Case with a Nut Roast but after entering the SuperValu Academy found that their burger was outselling the roast. So they concentrated on the burger and their judgement was confirmed with that gold in Dingle. It is popular and they have many repeat customers. They place great value too on Farmers Markets, learning from the feed back.

“It is still early days, still doing it all by hand. Very time consuming but very satisfying. We are now included on the Body Chef menu so it’s a good success story for us”.

Joe McNamee then asked Kate Lawlor if she had any concerns for the Irish food story and she pointed to misleading labels and Artie agreed. They both hope that education in food, from an early age, can help counter this problem. And both agreed that if your product is being misrepresented, that you are fully entitled to shout long and loud about it.

But McNamee wanted to finish on a positive note and prompted the main pair. Kate: “We are getting known for our food culture. We are value for money. We need to keep the small suppliers going. It is an exciting time.” 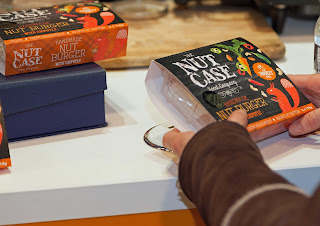 Artie: “I’d like to see it continue as it’s going, state agencies and producer groups pulling together. We have the raw ingredients and they are now being better used, the freshest, the best, all driven by passion, our biggest selling point. From bar food to silver service, the quality of Irish food is high and can improve even further.”

Reckon Joe got his wish there. And we had all seen the passion from the producers on the night. Consumers are key too. Check that label and buy local, fresh and fair. The more we pull together the further we can go.