The SpitJack has hit the ground running in Washington Street and, with its first summer a success, has just announced its new winter menu. I took the opportunity to try it out in mid-week. The meats as you’d expect, as SpitJack is a rotisserie, are top notch but the real surprise was the new Cheese and Fortified Menu. Not too many of our top restaurants will match this magical list of possible combinations.

And the good news is that there is quite a local input. Near neighbours, Ardsallagh Goats and Johnny Fall Down, feature strongly. The inventive Glounthaune drinks outfit are doubly represented with a Pom’O Apple Port and a Rare Apple Ice Wine.

The Pom’O is based on the traditional Normandy pommeau (pressed apple juice with apple brandy) but the Glounthaune orchard has added a twist or two of their own to make this beauty. They used rare apples and then a combination of freezing and thawing, a year long fermentation and nothing at all was added to make the Ice Wine, the first Irish ice wine to be sold. 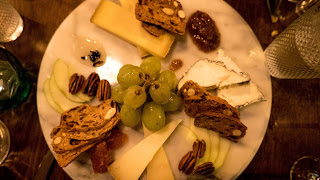 It is beautiful and rich and perfect with the cheeses that we had and with the Ardsallagh Ash Pyramid in particular. Ardsallagh have a much longer history in the East Cork area than Johnny Fall Down but Jane Murphy continues to innovate and this is her first ash pyramid. Made from pasteurised mild goats milk, it is formed into the traditional Valencay shape and sealed in ash. Got an early taste during the Culture Night but this is the first commercial batch and it won't be the last.

The Ardsallagh was served with Fig Compote. Our second cheese was a favourite of ours from our (too) few visits to the Basque country. It is a sheep cheese from Ossau-Iraty a area of the Pyrenees where we got “lost” once or twice. In the Basque country, they often serve it with a Black Cherry conserve (I use Loganberry jam at home!); last night, SpitJack’s Quince paste was excellent.

Then we finished with the Comte AOC from the Jura mountains, served with truffle honey. This 24 month vieux is a beauty, delicious, and enhanced by that honey.

The new menu, like the previous one, is well constructed, in the sense that, if you wish, you can avoid meat in the starters and that’s what we did.

On now to the main event, as my Eight Degrees Sunburnt Red Ale sank in the glass. Time for the Rotisserie Pork Belly Porchetta (€17), Slow Roasted Pork Belly Stuffed with Sage & Garlic, Crisp Crackling, Kale Colcannon Potatoes, Braised Kale & Apple Compote, Sautéed Tender Stem Broccoli, Honey Mustard Jus. “Savage,” as we say around here. The word’s not the most sophisticated but, when pronounced with soul, means the meat (in this case) is rather good my dear.

So two very happy customers and that was before the cheese and Johnny Fall Down took us to a higher level!

Check out the new menus and more here at SpitJack