Taste of the Week. From the Bula Bus


From the Bula Bus


The Bula Bus is a restaurant, in a bus, a double decker. They cook downstairs, serve you upstairs. It is an old bus from Manchester that doesn't go anywhere anymore. It is parked up, permanently, in the backyard of Billy Byrnes pub in Kilkenny.

But they do have a stall at the local Farmers Market every Thursday and it was there that I got fed last week and found my Taste of the Week in their Czech style Smoked Sausage.

Six euro bought me street food at its best. A big choice of sauces and condiments and the large sausage was served with Californian style pickled cabbage, a faster version of Sauerkraut.

The sun was shining as I sat down on a public seat nearby and tucked into my substantial and very tasty lunch. I could have been in California or Prague but Kilkenny’s Parade was cosmopolitan enough for me.

It is easy enough to catch the Bula Bus crew and their out of the ordinary food - they are open most days behind the pub. More info here. 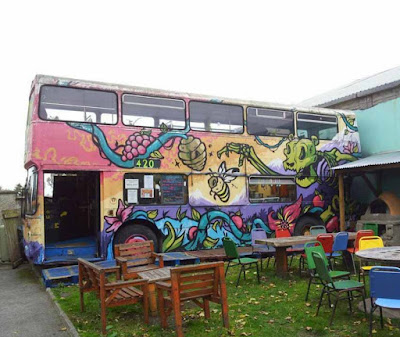 A brief account of a 2014 visit to the bus: it was time for lunch so the group (about 14 strong) headed off to the Podge Meade’s Bula Bus, a former unit of the fleet in Manchester city but now parked up at the back of Billy Byrne’s pub. The kitchen is downstairs and the upper deck is laid out as a restaurant, serving wild and foraged street food. Venison, mushroom and rabbit (which I enjoyed) featured on the menu.