At the home of Ireland’s Oldest Beer. The Smithwick’s Experience, Kilkenny. 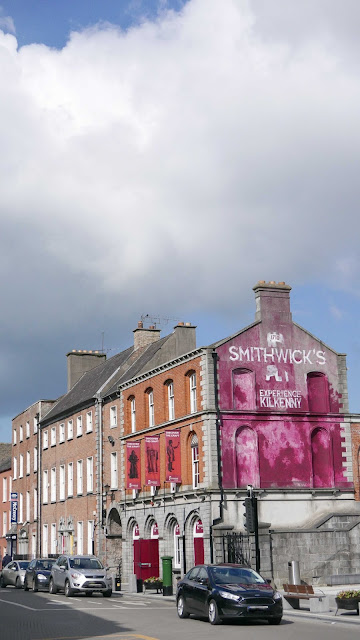 Smithwick’s, our guide tells us at the start of our tour in its Kilkenny home, is the oldest beer in Ireland, first produced here in 1710. The 307 years impress our group, which includes a few Americans. But we are told it is entirely possible that beer was made here by Franciscan monks as far back as 1231.

In 2012, the Kilkenny People headlined: Profitable brewery closed. The tradition ended in 2014 when the brewery closed and the beer is now brewed in Dublin, at Guinness.
We were introduced to the family behind the name, eight generations of them, including John Smithwick who originally leased the building. John was a budding entrepreneur and the twenty year old soon started the brewing business.

But then the penal laws hit - Catholics weren't allowed own businesses. The crafty Smithwick found a loophole and Protestant Richard Cole became his frontman, an early example of eucenmism.

That block on Catholic ownership lasted for an incredible 117 years. And the fact that the Smithwicks weren't the legal owners meant they could only operate locally so the business was hindered - going outside of the locality would put the “arrangement” at risk.

Finally, it was John's great-grandson Edmund who got the legal right to run the brewery in his own name and celebrated by putting the name over the the gate (that we had entered a few minutes earlier). At this stage too, the family were very close with Daniel O’Connell, the Great Liberator.
Roads weren't great at the time so Edmund started using the rivers to distribute Smithwick’s. Expansion followed and soon it became a national brand. We would meet all the key family members, or at least their talking portraits, as we made our way through the house. And the centuries.

In the 1930s, Walter brought a more modern outlook. He introduced their first logo, the No.1, and also started a commission scheme for the salesmen. By 1950, the brand was becoming known outside of Ireland and in January of that year, they attempted their first export to Boston. It landed in Boston - that much is known - but then it appears that every bottle was stolen! Nowadays, Smithwicks is exported to the US, Canada, France and South Korea. 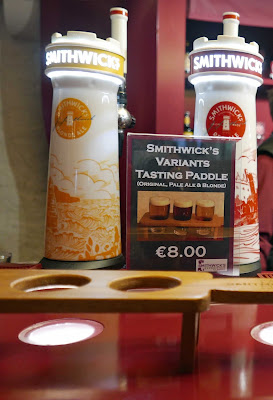 The guide went on to introduce us to the ingredients and the process. We had a good sniff of the various hops used in the beer, now made in three versions: the traditional red ale, the pale ale and the blonde. Hops sniffed included the American pair of Amarillo and Cascade.

By the way, if you ask for a Smithwick anywhere in Ireland, especially in Kilkenny, you’ll almost certainly get the traditional red. Our final call was to the bar to sample the wares. The basic tour entitles you to a pint of the red ale. A few euro more and you can have a paddle with half-pints of the three different beers.
My paddle and few others, including that of a couple of Californians, didn't work out too well. We got the red and the excellent pale ale but the blonde tap ran out.

We were told we’d have our blonde in a few minutes but the guide was called away (presumably to lead another group), there was no other employee left at the bar and we never got the blonde. Ourselves and the Californians and a few more left without tasting it and that put a bit of a downer on an otherwise interesting tour.
beer Kilkenny Smithwick's Experience