Barry’s Tea. Favourites for more than a century.


Barry’s Tea. Favourites for more than a century.


As the 19th century turned into the 20th, a blacksmith’s son from Ballyhooly came to Cork city to work in a shop. Soon, in 1901, he became a “counter-jumper” and set up his own shop dealing in Tea, Wine and Spirits. That entrepreneurial country boy, James J. Barry, was the great grandfather of Tony Barry, our host on a tour of the Barry's Tea factory in Cork earlier in the week.

The first Barry's Tea Shop was in Bridge Street and, by the 60’s, Tony told us that they were well known for tea. His father was then running the business - the shop now in Princes Street -  and had a lucky break. Marketing was barely known as a science in those days but a young man asked to do a study on the firm and discovered a gap, a gap that Barry's turned into an opening. The young man found that Barry's Tea was very well liked but that many customers had trouble getting to the shop to buy. The solution was to distribute to other shops around the city and Madden’s, Bradley's and Smith’s were among the first.

Marketing, by the way, wasn't exactly new to the Barry’s. Back in 1939, they recruited three elephants from a  visiting circus and marched them down the traffic-free city streets "with tea chests strapped on!”  Read more of the Barry's Story here. 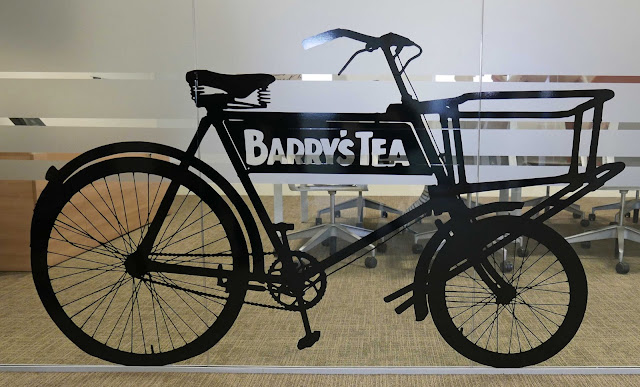 We were there, at their current Kinsale Road facility, as part of a group of Munster Wine and Dine members. MWD member Stuart Musgrave knows Barry’s well and was indeed once one of their rivals. But he reckons, always did, they make the best blended tea in the world.

And Barry's, who nowadays employ 65 people, certainly know their stuff. Tony explained a bit. “Rwandan teas give a good colour but are very light. So you need something for strength and India provides that. Still, you don't want something too strong either so add a contribution from Kenya and you’ll have a good all round bend.”

The tea plant, a bush, grows in equatorial areas. The bushes grow like a hedge, making it easy to pluck the leaves. Hand-plucking is still very common. It is a natural product. After plucking, nothing is added. Green tea and black tea comes from the same type of plant. “The green is steamed and rolled and is fresher while the black is withered and fermented.”
He told us that there are similarities between wine and tea, that terroir matters in both. “So how do you know where to get the best?” someone asked. “Well, “ he smiled. “We’ve been around for over 100 years. We know where to get the best teas, where the best tea gardens are. We have lots of contacts now and they know what we want.”

“Tea is not a complicated business, “he said. “But you do need to get each part right, from sourcing to blending to distribution and sales. It is not traded as a commodity so we don’t have to buy futures.” Still, when there is a high quality crop, they aren't slow in building up their stocks.

We had a few samples of traditional teas and not so traditional (including apple/pear flavoured and Berry Berry) before we began our walkabout. First stop was the the real Tasting Room with veteran tastier Denis Daly doing the honours. The window is north facing window here - they want natural colours, not a tea turned a flattering gold by the morning sun!


The samples enabled us tell the difference, at least for that moment, between the various teas from Asia and Africa and then we were off on our factory walk. First we saw the high stores of palleted tea, some in vacuum packs, stamped with exotic names such as those from the gardens of Gatunguru in Kenya. “Some of these gardens are in the most beautiful areas of the world.” That vacuum packed tea could last for a few years but Barry's like to rotate within the year.

Then we saw the blending area followed by the packing and the boxing. Amazing to see the tea-bag machine in action, making no less than 2,000 bags per minute! Next came the boxes being packed, by robots, into large packs for transport via container.

Indeed, there was a container load lined up for export to the USA - they export about 11% of the total. The working day was drawing to a close and so was our eye-opening informative tour. Reckon I'll never look at the humble cup of tea in the same complacent way again!
Check out the Barry's website, including online shop, here.
Barry's Tea Bradley's tea