“This is the biggest Pot Still in the world,” said David McCabe, our guide on a tour of Midleton Distillery. The copper giant that he showed us in the old distillery has a capacity 143,872 litres and is no longer in use. Copper has some key properties that make it highly suitable for the task: it is easy to shape, has good conductivity and removes impurities.

In the new distillery, Midleton has the biggest operating stills in the world. And the three copper giants that we saw are due to be joined by another three later in the year. It is amazing to see these three in action, their contribution coming after the milling, the mashing and the fermenting.

And when they have their work done, the triple distillation (most Scotch whisky is distilled twice), the infant whiskey is piped out to holding tanks before being moved again to mature in casks, 1.2 million of them at last count! The giant warehouses make quite a “town”. For more details on how whiskey is made, and we are talking Irish here, the one with the “e”, see here.
Then anothering mind-boggling figure as we sipped from 24 year old and 17 year old whiskeys in one of the warehouses. The evaporation of the alcohol into the air, known in many cultures as the “angels share”,  amounts to some 24,500 bottles of Jameson per annum! Happy angels but there's some harmless pollution, a dark dust that settles on the warehouses. I have also seen it at the Remy Martin distillery in Cognac; hard to miss it there, as the buildings are white.

The difference between our tastings was not just the age factor. The 24 year old had been matured in bourbon casks while the 17 year was from a sherry cask so there was a colour and flavour difference as well.

The colour difference is easily seen at the Irish Distillers Pernod Ricard Whiskey Academy, the pride and joy of David, our Whiskey Ambassador. It is based in a restored building in the old distillery. Back to figures briefly. The old distillery take up about 12 acres while the new one is ten times larger. 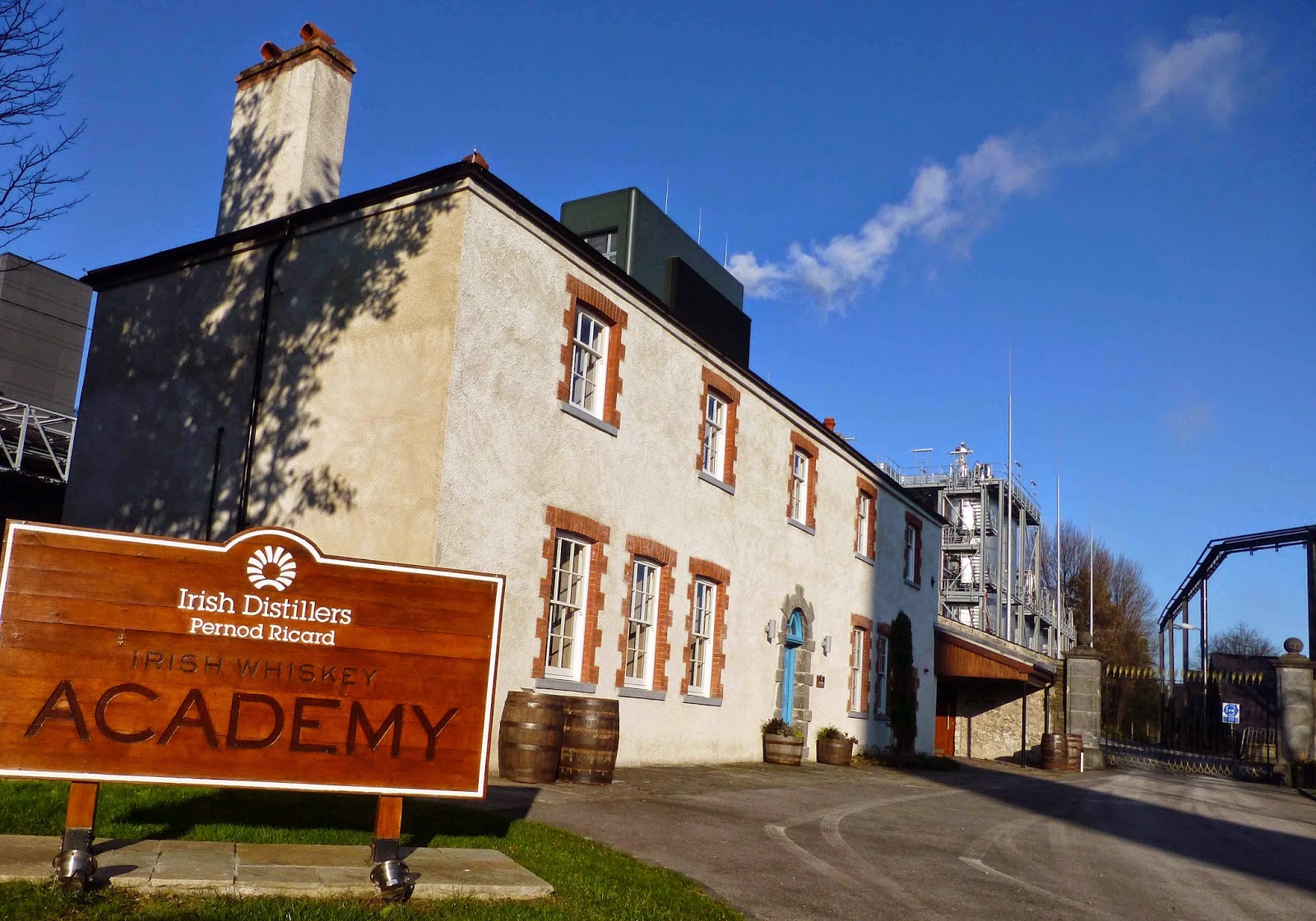 The Academy class-room is state of the art, though David also uses the old chalk from time to time too to illustrate a point. Pupils are taken through the process, step by step, and get the opportunity to blend their own whiskey which they can take home with them.

But the theory lessons are short and you won't be bogged down with detail. In between, you are taken out and about on the site to see the practical side of the whisky making business. Check out those Pot Stills. Hands on. See and taste. Lots to see. You’ll notice the Americans and Spaniards put their bungs on the side of the cask, the Irish on the top because the casks are stored in an upright position here.

Since opening its doors in February 2013, the Irish Whiskey Academy has become the dedicated whiskey institute of Irish Distillers Pernod Ricard, hosting courses that focus on the production and heritage of Irish whiskey produced at Midleton. It started off to train the distillery sales force but now there are courses to suit everyone and many students come from abroad. Check it out here  and give yourself a present!

One type of whiskey, the Single Pot Still, is the real Irish. This spirit almost died a death, for many reasons, but is now on the up and up.  Check the story of this premium product out here where you’ll read that Jameson is not a Single Pot Still but Redbreast is.

If you join the Stillhouse (no fee), you’ll get special offers from time to time. I just ordered one bottle of a limited edition of Mano a Lámh, a Redbreast made in special sherry casks. But you’d better act quickly as I believe there are not very many left! Must say though, aside from the odd offer, there is a wealth of information on the site and it is well worth a look.

After that, why not take a trip to Midleton to take the distillery tour. Details here.