César Saldaña on Sherry. And where the rain in Spain really falls.


César Saldaña on Sherry. And where the rain really falls. 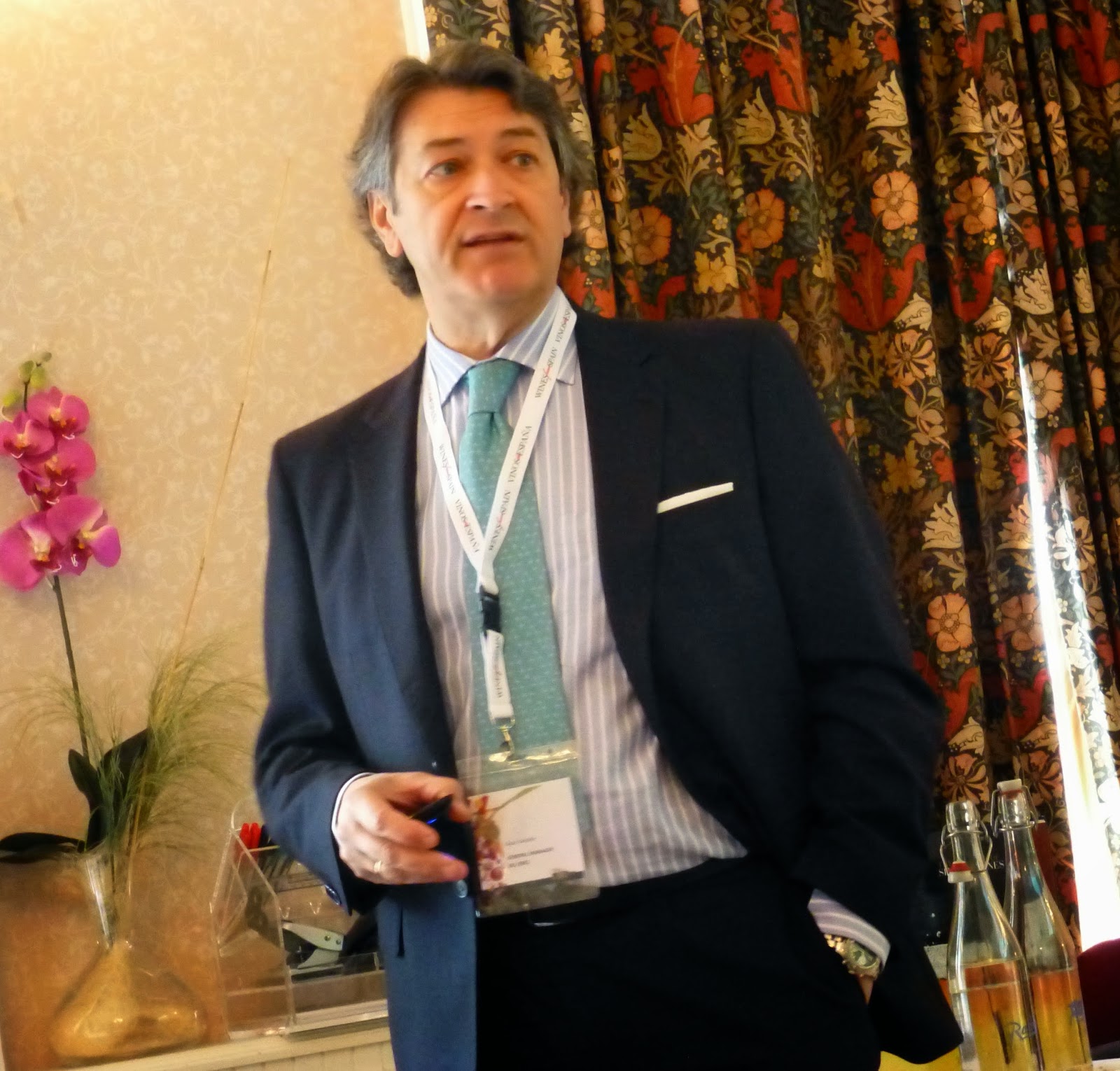 The rain in Spain doesn’t fall mainly on the plain. That’s the story according to César Saldaña.

And he should know. He is an expert speaker on Jerez, its wines, food, culture and history and,since 2000, has been Director General of the Consejo Regulador de las Denominación de Origen de los Vinos de Jerez. He was in Little Island's impressive Radisson Blu Hotel on Wednesday, with Wines from Spain,presenting two information sessions on Sherry.

César says the rain falls mainly on mountain tops in the Jerez area.That rain is important to sherry as is the nearby Atlantic Ocean and the local rivers, especially  the Guadalquivir. They and 300 days of sunshine help make Sherry what it is. As does the local white chalk soil (the Albariza) that captures the water and also reflects the sun upwards to the fruit.

The harvest date is getting earlier, perhaps due to global warming. For the past eight years, it has started in August rather than September as previously. In any event, rapid harvesting is essential.

Sherry, as you probably know, has many different styles, from pale to dark, from dry to sweet. The dry comes  from fresh grapes while the sweet comes from grapes that have been late-harvested or sun-dried.

He took us through the details after the harvest, from the 1st Yema onwards, including the making of wine alcohol (to be added later for fortification) and, of course the Flor, the biological aging method that most famously produces the Fino and the Manzanilla. Broadly speaking, the darker sherries come via oxidative ageing, though in the corridors of the Consejo Regulador it may be more PC to use the term traditional aging.

The process continues on to the unique system known as criaderas y solera, basically stacks of casks. The row on the floor contains the oldest wine and is called the solera, the rows above (the top one contains the youngest wine) are called criaderas. As sherry is taken out (for bottling) from the bottom, new wine is added on top.

“ The wines of sherry are of different generations. No one person made that bottle. Nor can he claim that he made it.” Wines have been made here since Phoenician times and it is the traditions that make sherry so special.
How special, we were about to find out. We started with La Goya Manzanilla by Delgado Zuleta, a very traditional house in Sanlucar. “After five years aging and protected by the flor, it still has that beautiful straw yellow colour. It has a very dry finish, an acquired taste. It is a best seller locally and  a very good example.”

César made little of the difference between Manzanillo and Fino and a well known Fino was next on the list: the Tio Pepe by Gonzalez Byass. He again pointed out the typical straw yellow colour and said it was excellent as an aperitif and with tapas. “It is a classic Fino and the best selling.”

The next wine was not pale but amber. This was a Monteagudo Amontillado, again from Delgado Zuleta. He told us that prolonged aging had led to increased concentration, still the dryness, more alcoholic with a long finish and persistent in the aftertaste. “A very good example.”

We moved a little further up the abv with the next bottle, the Villapanes Oloroso Seco from the traditional house of Emilio Hidalgo. “Rather robust and evident presence of seasoned wood, smooth in the swallow and with great persistency in the aftertaste.” 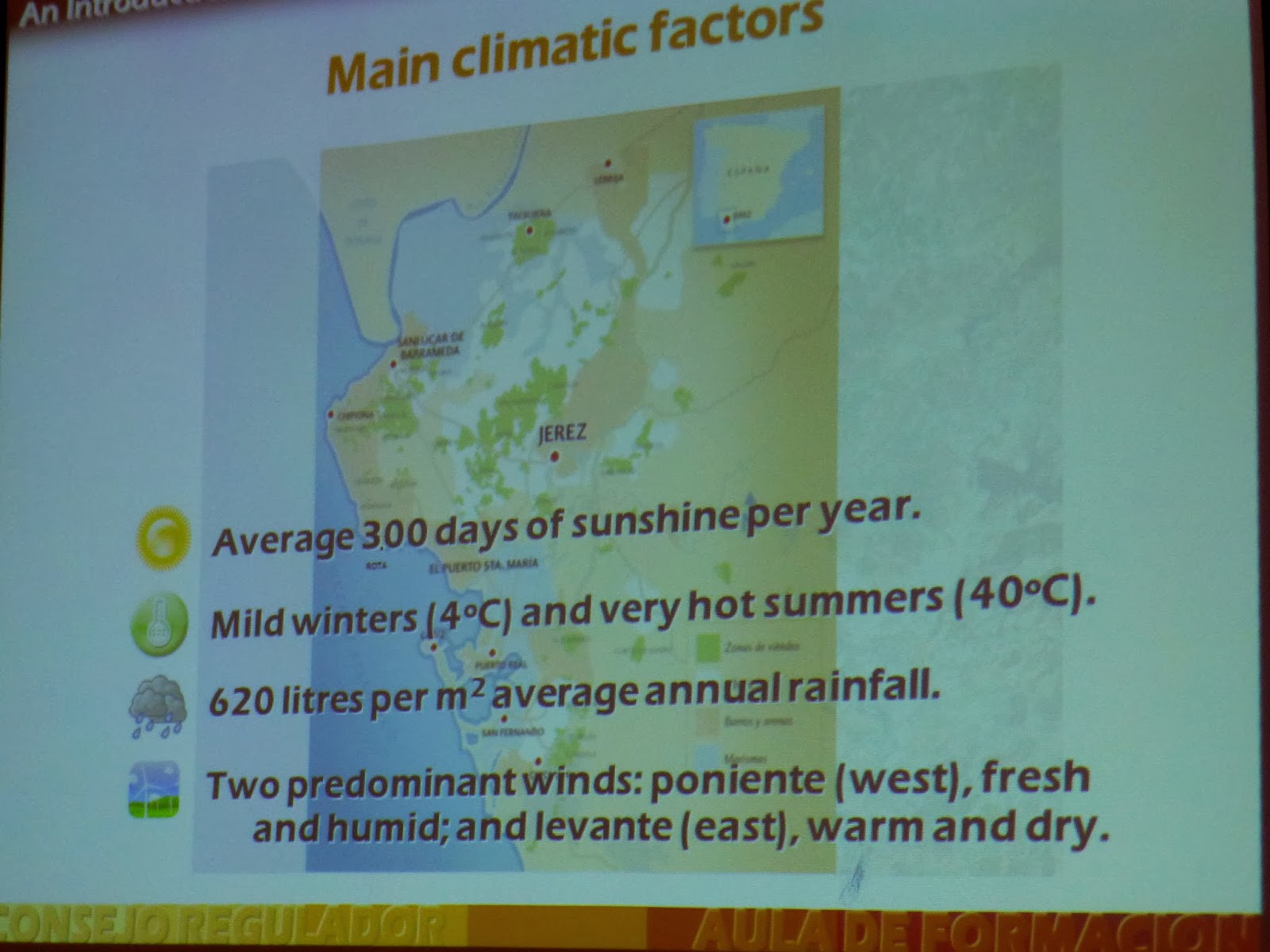 Now we were onto the sweeter sherries with English descriptors, cream for instance. That was how the English (and not just the English) liked them. Harvey's Bristol Cream has been in many an Irish home (sometimes for far too long, say from Christmas to Christmas) but it surprised more than me at the tasting.

Like the previous wines, it is made from the Palomino grape, but has come through the oxidative route and has a mahogany colour. We were told it has 120 grammes of sugar per litre (much less than the next one). It is quite a complex wine, nicely sweet (without being in any way sticky), with a lovely velvety texture. At €14.99 for a full bottle, I must put it back on buying list! Pretty good value too, as indeed are many of these sherries.

No prizes for guessing that we completed the session with a PX, shorthand for the Pedro Ximenez grape. This 30 year old Pedro Ximenez Noe is produced by Gonzalez Byass and has close to 450 grammes of sugar per litre. The colour, considering that this is originally a white wine, is amazingly dark. “It is rich and dense, yet fresh, clean and fruity, concentration is very high and you get notes of coffee, caramel, toffee, liquorice in the aftertaste.”

* I’ve probably gone on a bit longer than normal here but sherry is a fascinating subject. If you want to read more on the subject why not check out the official site here www.sherry.org/en 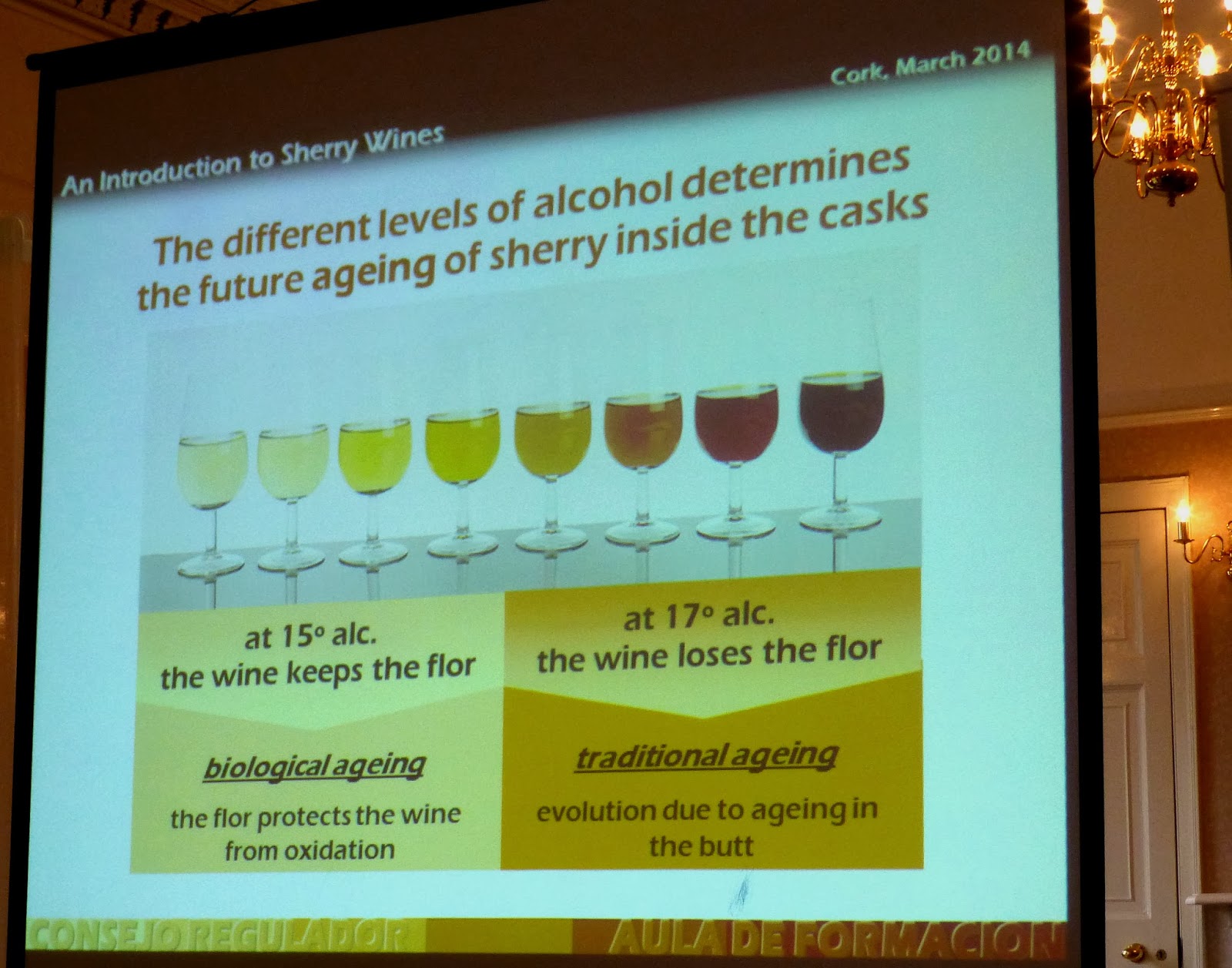