Australia displays many faces of Shiraz

Australia displays many faces of Shiraz 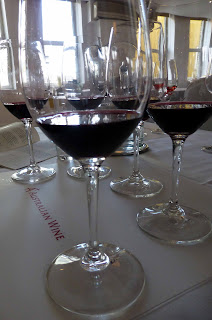 WineAustralia’s John McDonnell showed over a dozen quality wines in Fallon and Byrne last Friday. The aim of the tasting was to demonstrate that Australian Shiraz can exhibit both power and elegance and that the country can produce much more than just the big homogenous style.

With sixty four of Australia’s wine regions producing Shiraz, it would be most unlikely that they’d all come up with the same big, rich and powerful style. But that perception is out there. Two hours in Fallon and Byrne did much to dispel that myth. No lack of variety in this line-up.

There may have been some gentle disagreement between those present, mainly restaurateurs and writers, about the comparative merits of the individual wines but, overall, the occasion was well worthwhile. Joining John at the top table were Clare Valley producer Tim Adams  and wine writer Kevin Ecock.

2008 Ferngrove Shiraz, Frankland River. This first Shiraz was the only one from Western Australia and Kevin Ecock praised it as “an extremely good wine”. Tim said it reflected the “coolness of the district, angular, lean, with age potential.” Already we were talking about different types!

2009 Innocent Bystander Syrah, Yarra Valley. The difference here, at least the one that caused some conversation, was the fact that 2% Viognier was added to this Syrah (the only label that didn’t use Shiraz!). I don’t think the room was overly bothered about whether the minimum Viognier input was noted or not on the label.

2010 Tyrrells Rufus Stone Shiraz, Heathcote. I liked this best of the opening flight. It had nice fruit and spice, an excellent mouthfeel and the best finish. Tim classed it as medium bodied with “nice bright fruit flavours”.

2010 Wakefield Estate Shiraz. This widely available Clare Valley wine from the Taylor family (who believe that great wines are made in the vineyard!) was smooth and fruity, with supple tannins and spice hints in a medium body.

2009 Tim Adams Shiraz, Clare Valley. Tim didn’t use this to fly his own flag but did enlighten us on how water costs and weather variations are mega factors in the area and that winemakers have learned to grown more sustainable crops with better quality but at a higher cost.

This one certainly had quality and the price (€16.95) is not that mighty high. Kevin described it as the “standard bearer”. I thought it was a gem with power and finesse, really rounded, approachable, loveable. Brilliant.

2008 d’Arenberg Lovegrass Shiraz, McLaren Vale. This was something different, a blend of areas and a blend of varieties. It had a very inviting bouquet but delivery on the palate wasn't quite as brilliant. Mary Dowey wasn't so keen on it, saying it “suffers in the line-up here”.

2009 Wakefield Jaraman Clare McLaren Vale Shiraz. This was a blend of Shiraz from two different regions and I liked it, the intense fruit, the hints of spice and more, all excellent. Tim though said it needs more time, maybe up to five years, to bring even more out of the fruit.

2008 Tim Adams The Aberfeldy Shiraz, Clare Valley. The good news is that this is another gem, another complete wine from Tim, another with power and elegance combined. It has spent 24 months in oak but Tim guards against the oak taking over.

The less than good news is that the 4 acre plot, planted first in 1904, is “naturally dying”. It needs to be replaced and Tim is working on it.

Kevin: ...layers of interest...gentle and elegant.

Soft and elegant on the palate, the Schild was the one I voted for when a discussion arose about the comparative merits of these two. Quite a few had their hands up for this one though there were a few serious hands, only a few, raised in favour of the Jacobs.

The tasting came to a brilliant end with these two, though only the first is available in Ireland. Loaded with flavour and colour, the Blackwell is intense and excellent. "Delicious," said John.

But the Old Block was something else. Tim said it was big and bold, “a richer version than the Blackwell, multi-layered with a great balance.” He advised that both were good for long term keeping and that he keeps them himself in his own collection.
The audience certainly enjoyed the tasting and the knowledge of Tim, Kevin and John. Indeed, John was urged to mount similar events in the future and to use the same formula (the same number of samples to be tasted in a 2 hour time frame). He was delighted to hear that his hard work had been approved and indicated that a similar Chardonnay occasion is in the pipeline.
shiraz Syrah Wine Wine Australia