HAYFIELD IN HARMONY WITH SANTA SOFIA

Well done to Sandra Biret-Crowley, sommelier at the Hayfield Manor Hotel, and her team who came up with yet another brilliant Wine Society Evening. This time, the wines from the Santa Sofia winery  (near Verona) were featured and you’d be hard pushed to find a better set from anywhere.

You’d be hard pushed too to find a better man to put the message across than Luciano Begnoni who beguiled one and all with his knowledge of the wines and “the way he told them”; not quite the queen’s English but very very engaging. His theme was a wine for every occasion.

First up, after a welcome glass of Prosecco (Bortolotti Spumanti), was the Pinot Grigio Garda DOC Le Caldera 2010, fruity and elegant, “a wine for every day”, according to Luciano. The reds though were to prove the stars of the show but, first let me tell you that the Whisky Cured Salmon, our first course, set a very high standard that was maintained for the enjoyable evening.

Now on to the House Smoked Magret Duck Breast, with duck liver and Foie Gras Parfait, orange dressing and Toasted Brioche. The team had decided that the Ripasso Valpolicella DOC Superiore 2008 would accompany this and it was a terrific choice.

This was a wine for every second day, according to Luciano, soft and easy to drink. “Aged in Slovenian barrels for 9 months, it is not so much spicy but very fruity.” Now we were on to the “once a week” wine: the Amarone della Valpolicella DOC Classico 2006. 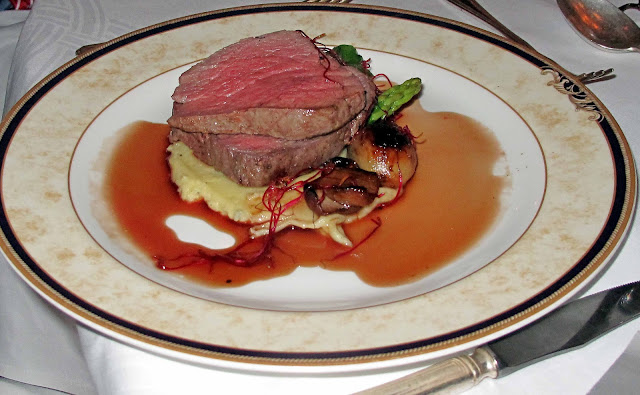 “Cherry and vanilla,” according to Luciano. “And black pepper. It is complex and will have a long life. Now is only the beginning.” Just superb. And so too was the dish that accompanied it: Fillet of Irish beef, whole glazed cepes and confit of Shallot, scallion pencils, black truffle scented Potato puree, red wine jus.

Next up was the sweet one: Recioto della Valpolicella Classico 2007. Luciano: “This sweet wine is difficult to produce but it is well balanced, sweet beginnings, clear to the end. After 12 months in French oak, it has a nice complexity and hints of cherry, wonderful with chocolate.” 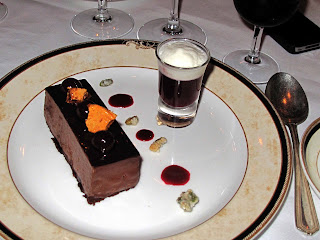 We found instant confirmation as the Hayfield served up Chocolate Marquise with Griottine Cherries, Honeycomb, Crystallised Pistachios and Cherry Cappuccino. “A great combination” as Luciano had forecast.

Still time for one more wine: Montegradella Valpolicella DOC Classico Superiore 2008. Made from the same grapes as the Amarone but with an ABV of 13.5 as against the massive 15% of the Amarone. It was a perfect fit with the plate of Irish and continental cheeses.
Luciano was accompanied to the dinner by Donie O’Brien, Commercial Manager of the Erne Drinks Company that distributes the wines here. Donie, who spent 15 years with Heineken, was also in top form and indeed the two were quite a double act! A very likeable duo, let me add.

So thanks to Santa Sofia and their reps and to Paul and Ciara of the Hayfield along with Sandra, Orchids Sous Chef Stuart Bowes and Executive Chef Graeme Campbell for a superb evening in a lovely setting.


* At retail level, the Santa Sofia wines and other Erne wines, are available in The Dublin Wine Rooms at the IFSC (dublinwinerooms.com) and at their shop in Monkstown (enowine.ie). Both of these premises use Enomatic wine machines with 48 different wines on tasting everyday.