As Others See Us. Swedish Journalist Visits Cork. 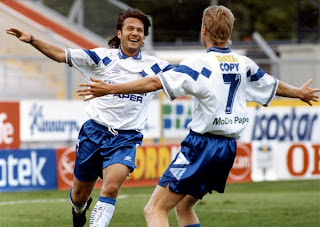 First "met" Swedish writer Pelle Blohm on twitter, thanks to a Corkman, Mark O'Sullivan @markstkhlm, an ex Tramore Athletic player, who lives in Sweden and also Philip O'Connor, Swedish based Irish sports journalist @philipoconnor . Pelle is a regular visitor to Ireland, has been Grand Marshall at a Swedish Patrick's Day parade and owns an Irish wolfhound.


Pelle Blohm (@PBlohm on twitter): Freelance writer about football and culture and stuff in between. TV-expert-commentator in football.


Pelle played professional football at a high level and had stints in places such as Derby and China as well as more local contracts at home and in Norway. In this You Tube clip you see him scoring against Torino in the 1992 UEFA Cup.  http://www.youtube.com/watch?v=SfXF5JewthY


Met Pelle at his B&B, @HandlebarsBandB  on the Lower Road, just after his arrival by train from Dublin and we headed off to Mahon Point Farmer's Market and Kinsale for a few hours. The ink was hardly dry on my short blog account of the day when I got a tweet from Mark saying an article by Pelle had appeared in his (Pelle's) local paper, the NA in Örebro, and told me "it was a good plug for Mahon Point Farmers Market and Kinsale".


See what you think. Must warn you though this is a Google translation, prone to error, though Mark says it is a pretty fair translation. I have added my own interpretations where there is doubt (in brackets).


CHIDED (BY) A CAB DRIVER DUBLIN
Talking football tends to be one of the best ways to break the ice
with the taxi drivers wherever you are in the world. It name drops a
name of a player or team and I usually talk to be running and the
atmosphere on top.

This early morning Dublin was not quite as usual. I jumped into a taxi
to take me to Heuston Station and by train to Cork. After a little
morning buzz about the weather chaffisen (the driver) asked:
- What do you do then?
sleepy as I was I took the easiest route.
- I work with football.

It (he) exploded in the front seat.
- Stupid, fucking, wankers those footballers. All they do is drinking,
gambling and whoring. Then went he with a long rant about working-class
boys who flooded with sick money that they do not have a clue how to
care for.

Idiot British club owners and a crazy industry. Of course, I
was silent, sit well here and look out over empty dark streets, I
thought. After all, he had a point with his outburst. Although his
words breathed old Irish morality Catholicism. Thinking of adding a
diplomatic comment somewhere but just then we were there.

Down in Cork I met Billy Lyons. A man who through friends and the amazing network
Twitter gave away five hours of their (his) time to show me around Cork's
surroundings. A man who talked the strangest accent I've heard in
English. He almost sang out the words that fit together without
interruption. Each sentence ended and began, remained an enigma. Then I
was still warned of the singing Cork dialect. I took a chance with yes
and sometimes no other times. It worked pretty well.

Billy drove past the soccer fields on top of the round green hills (in Kinsale) and talked to (about) local football as he is passionate about, I saw the old Charles Fort from the 1800s, the beautiful summer town of Kinsale and the famous pub Bulman.

Billy is a food writer took me to Mahon Point Farmers Market outside of town (Cork) where I walked around and greeted the vendors of local Cork Products. Tasted pâté, cheeses, bread and mushroom soup. Got a rant (explanation) about sushi with an Irish twist and juices and jams from the area. Fantastic day together with a very hospitable and proud Cork Nationals.

Later on vincaféet (wine cafe?) L’Atitude 51 at the edge of the River Lee's southern channel, I read in the NA (his local paper) if someone wrote a nidlåt (anthem?) of Örebro. We are poor in Örebro on writing good songs about our city. Ireland is a master in this branch.

Here are so many songs at any time of the country, towns and villages. Pride and love, joy and pain that is mediated through the music. We should call Örebro musicians to
write more songs such as Nikola Sarcevic and his song Hometown.

They should be put online and on CD's, paid for by the municipality and
used to promote Örebro. Instead of Phil Lynott's tribute to Dublin.
Mats Ronander of Örebro. Or a variant of Luke Kelly's song about
Belfast. "The town I loved so well" in Örebro robes of Karin Wistrand.
End of Pelle's article.

You can see the original article, which was written in a McCurtain Street bar where, according to Pelle, the Wi-Fi was good and the coffee wasn't, here
Charlesfort Cork Kinsale Mahon Farmers Market The Bulman