CURVES AND COLOURS IN A BUTCHER’S SHOP


CURVES AND COLOURS IN A BUTCHER’S SHOP 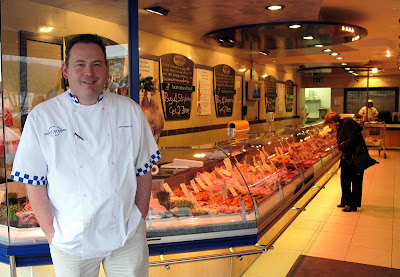 Never knew that meat had so many variations in colour until I saw the counter in James Whelan’s shop yesterday. What a superb display for the customer. And so much information. All well laid out and superbly lit. The soft overhead lights do their job well; there is virtually no glare and the customer sees the meat as it is.

Must say I had a terrific guide in Pat Whelan himself, taking time out from his busy day which also included a trip to the Avoca Food Market in Monkstown (Dublin) to oversee preparations for the opening of his new butcher shop there. Would love to live near a Whelan shop but at least we can always buy online .

Pat explained that the lighting was an integral part of the design and then pointed to the floor (an earthy colour) and to the ceiling (sky colours) and said the meat was the bounty of nature in between.

Curves abound too in the shop, virtually no hard angles. Fung Shui principles were employed. Pat admitted to being gob smacked when the German designer first explained the plan to him but had a good feeling about it and signed the cheque. It has worked out very well indeed.

All the major meats are well laid out here and some minor ones, everything from rabbit to beef and poultry of course and no shortage of info as to where it was raised and bred, much of it on the nearby Whlena farms.

Opposite the counter, there is a long row of shelves, generally with packs, including a whole range of puddings, from as near as Inch House and from as far as Newport (Kelly’s).

Whelan’s own pre-packed products are also displayed here, vacuum packed bacon and ham, sausages, rashers and so on. The packaging is transparent. You can visually examine the contents. Another example of the Whelan integrity! What you see is what you get. 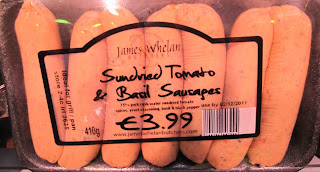 Towards the back of the shop, there is semi-circle (curves again) that contains the “deli”, another inviting counter where you can buy prepared or semi-prepared meals, everything from Boeuf Bourguignon to a mini quiche. It very much resembles the “traiteur” counter in a French butcher shop.

Pat has also managed to find the time to author a cook book called An Irish Butcher Shop. It is full of recipes and because it is written by an Irishman for an Irish audience, you won’t have any problem finding the ingredients.

The recipes are, I can say, brilliant and if you need any further help, there is a treasure trove of help, videos even, on the Whelan site which is well worth a visit. But, I have to encourage you to make a visit to the real shop and see one of the gems of the Irish food scene.