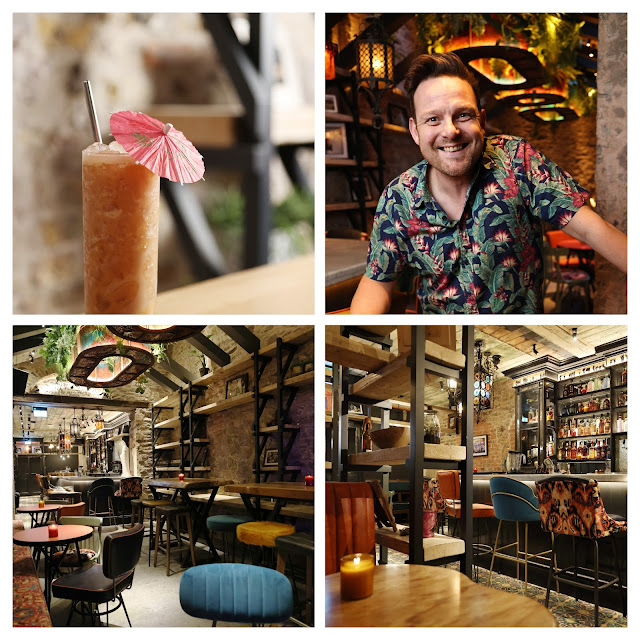 The team behind Cask have launched a new colourful venture in nearby Bridge Street, brightening up a southern corner with the food, drink and music of Latin America. ¡Viva América! ¡Viva Paladar!

Co-owner Andy Ferreira (above) is famous for his innovative cocktails at Cask and that continues at Paladar but with a Latin touch of course.

You have to try at least one. I settled on a longer glass, titled the Tropical Itch, a smooth and fruity one with Dingle Vodka, Bacardi 4 Rum, Myers Rum, Mango, Lime and Angostura Bitters.

The wine list is short but full of quality and you need to check it out, particularly the three from Chile that make up the red bottle list, as two of them were in my Top Four for 2020. One is the Pedro Parra “Vinista” Itata Chile, a young beauty from ancient Pais vines. Parra is also involved in the second Clos des Fous Cabernet Sauvignon from Itata. The renowned winemaker Aurelio Montes is the man behind the Montes “Outer Limits” Cinsault  also from the Itata. Bring a friend or two and enjoy one of these.

There are two reds and two whites available by the glass. Both the reds come from Argentina and one, by Las Hormigas (it means the ants, but don’t let that put you off!), features the Bonarda grape that is widely planted in the country as is the Malbec, also available in glass and also by Los Hormigas.

Another Argentina associated grape Torrontes is blended with Riesling in the beautiful Amalaya wine and the Sanama Sauvignon Blanc, this from Chile, is the other option by glass.

No shortage of spirits of course in the colourful bar with the friendly staff eager to help and that is true of all the staff we met in the comfortable 55 seater venue. You may of course get up and dance when the music plays at the weekend.

Back to the cocktails! By chance, we met Andy as we arrived and he took us through them. The left hand side of the card features names that many of us would be familiar with such as Mojito, Daiquiri and Margarita.

Prefer something simpler? Like a beer? Well, no hay problema. They’ve got 45 Dias Mexican Lager at the top of the list that also features Heineken and ciders by Stonewell and Johnny Fall Down along with a non-alcoholic hoppy beer from Brooklyn Brewery. There’s also an Estrella Daura Damm Gluten Free beer available.

And, speaking of gluten free, I noticed that most if not all the food is GF. The short and interesting menu ranges from snacks (Toasted Mixed Nuts to Empanadas) to small plates (eg Ceviche, Tacos El Pastor and more).

We tried a few of the Small Plates. Of course, we did! I had gathered that the Colifor was proving popular here and it is indeed a good one: Roasted Cauliflower, Green mole and grated Brazil nuts. As many of you know, moles are a variety of strong flavoured traditional sauces and marinades from Mexican cuisine.

At this point we should probably have ordered dessert but instead decided to share the Anticuchos (Slightly smoked beef skewers, Corn Salsa and garlic oil). After one delicious skewer each, enhanced by the Salsa, dessert was forgotten, at least until the next visit!