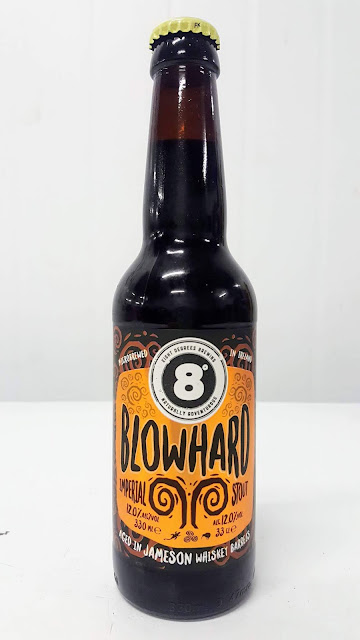 Long yarn on the label, rare deep-diving whales who go down to the darkest black and blow hard on their return. The Eight Degree brewers trawled to the furthest limits here and, barely decompressed,  came to tell their daring Christmas tale and they called this deep-dark and delicious creation Blowhard.

The smooth and flavour-packed beer, from regions hitherto unexplored, was quarantined for 30 days in Jameson barrels. Don’t worry, it is now safe in this Christmas season to open the little bottle but do pour slowly, sip slowly too. No point in going overboard when the hard work of the voyage is done. Enjoy the amazing flavours and do watch out for a nice hint of uisce beatha in the long aftertaste!

This is a classic Imperial Stout, with knobs on. They stuffed the mash tun to the gills, double mashed for extra flavour, used premium Irish malt, went overboard with toasted dark malts and extra roasted barley – all before committing the beer to a month long sentence in Jameson whiskey barrels, courtesy of their friends in Irish Distillers.

It is a spectacular seasonal special. Try it, they recommend, with steaks and cheese. Or at the end of the meal, pair with a dark and rich Christmas pudding or a decadent Belgian chocolate mousse. Didn’t have either in the house last Saturday night but did have some Mince Pies (made by Foods of Athenry). Got lucky with that pairing as it worked a treat. Pudding is next!

Eight Degrees Taste of the Week