Brunch at Hook Head. Then take the tour.


Brunch at Hook Head
Then take the tour.

Let us start with the brunch as I did on a recent Sunday. They have really upped their food offering here since a 2016 visit and brunch is available all day every Saturday and Sunday and they hope to extend it throughout the week during the school holidays.

Oh, by the way, the lighthouse and cafe are open year round. So if you’ve seen the beautiful views on a calm day, do not hesitate to go down on a rougher one and you’ll get a different “tour”.

During our December (02.12.18) visit, the weather was mainly cloudy and very windy at the Hook and that meant it was quite spectacular, a great day to visit! Even if we had to work our way through spray flying across the narrow approach road from time to time. Indeed, there is a wooden “rampart” by the wall surrounding the lighthouse and we got an invigorating splash or two as we took in the views from that vantage point.

Before all that though, we sat ourselves down in the spectacularly situated café in the former lighthouse keepers cottages and found that the food offering wasn’t bad at all! Indeed, it was considerably better than the breakfast fare endured earlier at an expensive hotel in the north of the county.

The two rooms were close to full. No wonder it is proving so popular. You may also choose from a more general menu for lunch or just for snacking.

The Brunch list includes morning mainstays such as Eggs Benedict and Ballyhack Smokehouse Salmon. There’s also a Protein Packed Avocado Toast and another vegetarian option is Toast and local mushrooms, both options on toasted sourdough.

The general menu offers Soups, salads and sandwiches and quite a few more substantial meals such as a heart-warming Pie of the Day and they also have a Children’s Menu. At any time, you can drop in for a cuppa and a scone, a dessert perhaps. 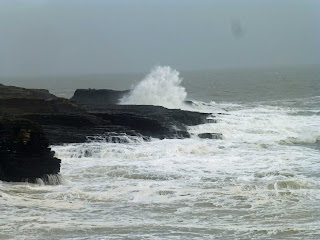 Very encouraging too to see they are committed to the environment. Quite a few examples of that from their compostable napkins to their use of paper rather than plastic straws.

Back to the food and we ordered their Home-made Pancakes, described as Beer and cardamon sugar pancakes. No shortage of toppings: banana, crispy bacon, Ballyhack smokehouse salmon, cream cheese and, of course, maple syrup. We choose the banana and syrup and a generous  pot of decent quality tea.

So having made your way to Hook (about two hours from Cork, take the Passage East-Ballyhack Ferry), you may as well do the guided tour. Indeed the guides here are regularly praised and our fellow was also top class.

If these walls could talk. You say to yourself as you enter the 800 year tower that houses the Hook Lighthouse on the tip of Waterford’s Hook Peninsula.

You soon find out, they do talk. In the first room, with its ribbed vault structure just like the two rooms above, a monk, a digital one, appears and talks about when he came here in the 6th century (maybe!). He was Welsh and called Dubhain. Having founded a small monastery, he and his fellow monks noticed the many shipwrecks in the area and set up an open fire to warn mariners.

Good, but not good enough for the next person you meet, on the next floor. This is William Marshal, another Welshman and a powerful knight, who was very influential in the south east of Ireland at the end of the 12th and beginning of the 13th century. He built the nearby Tintern Abbey and the town of New Ross and more, including this lighthouse (sometime between 1210 and 1230). Monks were again in charge, living here, keeping the faith, keeping the flame.

As you climb the solid building, you see where the monks cooked, lived and slept. Many changes then during the centuries, before, in 1996, the lighthouse was automated and the light keepers (no longer monks!) departed after almost 800 years. And the modern keepers are commemorated on the third floor, projected onto the wall to tell their story.

Out then onto the windy balcony to take in the fabulous views over the seas, over the land. The famous bird sanctuary of the Saltee Islands is visible to the east and to the west you can see The Metalman, another landmark for mariners, this on a cliff near Tramore in County Waterford.

As well as the light, a fog signal was operated at the lighthouse. For centuries a cannon gun was fired off the edge of the cliff during fog. This was replaced by a hooter, which in turn was replaced by rockets. In 1972 a foghorn worked by compressed air was installed.
If you didnlt have the brunch or lunch before climbing and descending those 115 steps, you’re probably well up for it now! Enjoy.

Quite a few walks too in the lighthouse area but be careful. Not all tragedies here have happened to people in boats.

Our guided tour was in English and it is also available in French, German, Spanish, Irish and Italian. Whales and dolphins may be observed from the shoreline around Hook Head with a good pair of binoculars. It is a great visit, to what is believed to be the oldest operational lighthouse in the world, and you can find out much more, even see a video visit, see the web cams too, on the website here.
brunch Hook Lighthouse Ireland's Ancient East Wexford