Down Home, Downtown at the White Rabbit


Down Home, Downtown at the White Rabbit 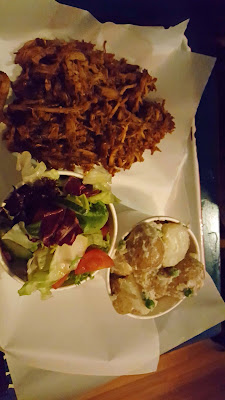 As we sat down at our table in McCurtain Street’s White Rabbit, Aretha Franklin was belting out her songs. Kind of appropriate I thought because when the Queen of Soul hit the road, her pots and pans came too.

She was no mean cook, those pots and pans rattling perhaps in protest against the “‘chitlin circuit’ - ‘a string of black-owned honky-tonks, night clubs, and theaters’- so-called because the venues also served up chitlins (chitterlings) and other soul food.” * Black musicians were often able to tour through a segregated United States only because of the existence of that circuit.

More music from that era, including Wilson Pickett’s Midnight Hour, followed as we studied the menu in this down-home joint at the far eastern end of the street, more or less next door, I think, to where the garda barracks was. The sixties in there were more swingeing than swinging; "bad" boys got their ears clattered. 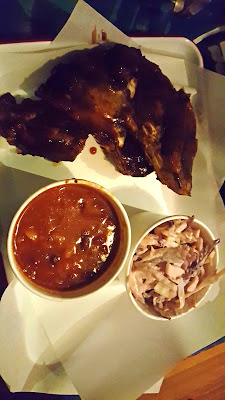 Amazing list of whisky here from the southern states, and other parts. Hard to make a choice but I did strike it lucky with Maker’s Mark, smooth, subtle and easy drinking. They have a wagon load of craft beer here also.

Aside from that cherished whiskey list - their “pride and joy” - they serve authentic slow-smoked barbecue food, our main reason for coming in from the December rain. Everything in this unpretentious place is prepared in the kitchen here.

They start with Brunch which includes the Cowboy Breakfast: their BBQ beans topped with house-smoked bacon and sausage, topped with a fried egg and served with sourdough toast.

As the day moves along you may enjoy Bar Bites such as Pork Belly Cubes, BBQ Tacos, Tortilla Chips and more, even a dessert of Kentucky Hot Chocolate.

The meats come into their own from noon on, until 9.00pm. There are salads and sides (including one or two vegetarian) and sandwiches, not in slices, but in brioche buns with red slaw, pickles and BBQ mayo.

We were there though for The Meats, the Meat Plates in particular. The Plate consist of your choice of meat to which you may add two sides.

CL went for the half pound of Pulled Pork with Potato Salad and Red Slaw (11.95). My pick was the 2/3 pound of Baby Back Ribs with Green Salad and BBQ Beans (12.95). We were the two happiest bunnies in town as we concentrated on those two excellent good value platefuls. We did share, of course, and the verdict came down narrowly in favour of the tasty ribs. And if you are picking a salad here, go for the outstanding beans (the others are all good too).

The other meat choices by the way are Pork Belly, Beef Brisket, BBQ Bacon, and Smoked Chicken Wings.

By the time we had finished eating, the place had filled and the music had been pushed well to the background by the happy sound of many young voices. Soul food in the south perhaps but a long long way from the chitlin’ circuit.

Well worth a call here, good food, good value. Our two platefuls along with the Bourbon (6.50) came to a grand total of €31.40. Service is efficient and very friendly, helpful too.

* Easy Riders, Rolling Stones (on the road in America, from Delta Blues to 70s Rock) by John Scanlan (2015)