The Aniar Experience. Tastes of the West


When I was a boy, I would fish for pollock in Belderrig with my Mayo cousins, using eels we had caught earlier in nearby mountain streams as bait. Later, with adult help, the pollock would be cooked over a few sods of turf. Not the handsomest of fish, but a delicious one.
The Michelin starred Aniar in Galway city has a modest exterior. Inside, it is cool, the air conditioning at a perfect pitch to keep the temperature down to comfortable levels during the late June heatwave.


Pretty much everything is at a perfect pitch: the service (chef Killian Crowley came to explain the details of most of the dishes), the provenance, cooking and presentation. We have booked in for the Inis Oirr menu, a six course tasting menu. It costs 72 euro and we know that before we arrive.
The drinks are on the expensive side, 9 euro for a bottle of Kinnegar beer for example. We take a look at the 80 strong wine list, looking for something light, something versatile. With excellent guidance from sommelier Zsolt Lukács, we settled on the excellent Terres Dorres L'Ancien Vieilles Vignes produced from Jean-Paul Brun's oldest Gamay vines in Beaujolais.


You are eased into the meal with four small bites, a multiple amuse bouche if you will. Three are pictured (above) and the fourth was a kelp and sea radish dashi. All were “amusing”, each tasty and each interesting.
Bread is an integral part of the meal here, a sign of friendliness and informality (Aniar is not a stuffy place). And when the selection (with a couple of butters) arrives on the table, there is a poem with it: Bread by Brendan Kennelly and, before you leave, you get the recipe for their Brown Soda Seed Bread.


So on we go to the Pollock and the Pine, a few green pine needles included so that you can try the citrus taste for yourself.  Another eye-catching palate-pleasing dish is the Oyster and Wrack, the oyster has been slightly charred on top. The sea, oh the sea.
Chef-patron JP McMahon likes to foster old cooking and preservation methods such as curing, pickling, smoking and fermentation.  It seems that next we are getting eggs but the shells contain mostly fermented potato and under that there is some chewy pollack, a worthwhile chew I hastily add. As with many dishes, the eye and the stomach are well satisfied.

Here comes the mains. The lamb and the baby gem have both had the Green Egg treatment. Hardly tradition but quite superb, a McMahon Galway mix of colour, flavour and texture.

So now we start to wind down with a "pre-dessert": an ice-cream of rapeseed (organic, of course) and birch (foraged). Perhaps I said wind down too soon. For it is followed by the main dessert of Strawberry and Woodruff, more foraging, more fermenting. The alpine strawberries are fermented to make a gel. Smooth and delicious.


Now we have two more. Beetroot with goats cheese is one. The other is Elderflower Meringue. And that is the finalé of a lovely meal, a menu that tends towards the lighter side, certainly lighter than the tasting menu enjoyed in Chapter One three years back.

You are not stuffed - nor should you be, anywhere -  but neither are you in any way hungry. In that regard, it is comparable to the 12 course menu at Ichigo Ichie in Cork. Indeed, I thought I saw a Japanese character on the front of the Aniar menu but when I looked properly I saw that is Ogham, an ancient Irish alphabet, and of course it spells Aniar.

The menu, which changes daily, is seasonal and local. Virtually everything on it is from Galway with a nod to one or two of the near neighbours, so maybe not quite as radically local as the 12-mile menu at Kevin Ahern's Sage in Midleton. If you want something different while you’re in Galway,  Aniar is the place to go. Very Highly Recommended.


Also from this trip:
King's Head Bistro
Kitchen at Galway City Museum
Getaway to the City of the Tribes. Galway 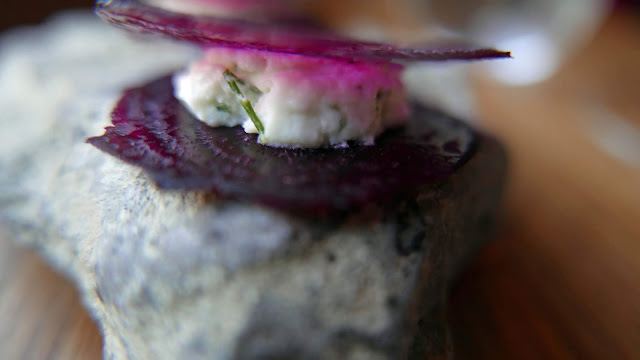