Early last Friday - well, about 8.00am,- we leave Cork on a five hour spin to Donegal, an uncertain forecast on the horizon. The trip, via Gort and Tuam, goes well and we land in Donegal at 1.00pm, on schedule. Just touchdown though as the weather is pretty good and we decide to continue to Slieve League, the highest cliffs in Ireland and less than an hour west of Donegal.

Soon, we pass the famous fishing town of Killybegs and close in on the cliffs. A cup of coffee and a scone at the Tí Linn Café boosted us as we headed for the cliffs. You come to a car park and, if you can walk at all, leave the car here and enjoy the walk up and down (timed it down at 25 minutes).
If time is short or the legs aren't what they used to be, open the gate at the end of the car park (it opens down the slope towards you), drive through and close the gate and drive carefully (road is comfortably wide enough) to the viewing point. Plenty of room to park up there.

The viewpoint itself is at quite a height, so much so that you don't really hear the waves crashing in below. The cliffs, part of Slieve League mountain sweeping down into the Atlantic, are, at 609m (1,998 feet), nearly three times as high as those at Moher. They are the highest in Ireland and, according to Wikipedia, among the highest three in Europe. Spectacular.

There are many walks in the area. And I was told time and time again that the best way to see the cliffs is by boat and that can arranged locally, as can a local guide for some of the walks.

After the exhilaration of the fantastic cliffs, we drove back to Donegal town, stopping to check out the huge fishing trawlers in Killybegs, the only place we got rained on during our stay but that heavy shower was over in a few minutes. 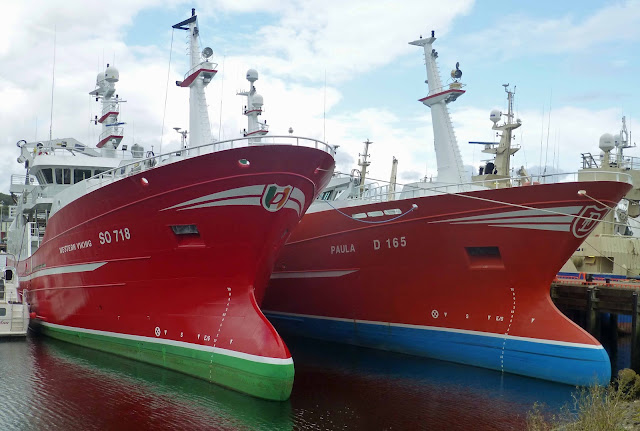 Checked in then to our gorgeous, if relatively expensive, accommodation at Ceol na Mara in Summerhill, about two miles from the centre of Donegal Town, quite a small town indeed but packed because of its famous annual festival, A Taste of Donegal.

We checked the festival website for parking areas and soon found one to suit us. Then it was off on foot to find our restaurant, The Harbour on Quay Street. It is an excellent restaurant, serving local food and craft beer. Highlight was perhaps their Aubrac Steak. By the way, The Harbour changed hands on Sunday, taken over by current chefs Patrick and Mary. Debbie and Jo, behind The Harbour for the past 15 years, are moving this week, with "the same food and the same crew", to a spanking new restaurant further up the street called Quay West.
With our early dinner finished, we walked across to the busy Festival site. They had opened at four and, by seven, the place was abuzz, with top chefs demo-ing and crowds sampling the food from dozens and dozens of stalls. Fast food (Bad Boys BBQ were prominent - just follow the smoke!) at the start for those who hadn't been to the Harbour!

Some amazing displays in the stalls, including one from Eddie Walsh, the local butcher who supplies the Aubrac steaks to The Harbour. We enjoyed roasted marshmallows, Aran Island Goats Cheese, Roscommon Chocolate, and much more. Lots to drink too, beers and ciders (including a limited edition from Longmeadow that has been matured in oak barrels).

And we enjoyed a drop or two of Coole Swan and a chat with Kenny Maguire who had also dropped in and we also had a chat and a laugh with Melanie Harty, up all the way from Kerry with her spicy jellies! Couldn't get near the folks in Ballymaloe Relish, they were so busy.

Another familiar face, up by the demo marquee, (where he would do his stuff on Sunday morning) was chef Zack Gallagher, well known to most of you as the Irish Food Guide on Twitter. He introduced us to Brian McDermott (The No Salt Chef) and Kevin Dundon, all enjoying their busman's holiday.
The local hotels were out in force as well with competitions and samples to beat the band. Perhaps the most impressive sample came from the nearby Harvey’s Point, a pancake with a most delicious apple and cinnamon filling.

The darkness, not long fallen, was banished for a while with a spectacular firework display over the tented festival village and the harbour alongside. Time for us then to head back to Ceol na Mara and get ready for the second day of this friendly festival.


Castle, Crafts and Super Food. A Taste of Donegal Day 2