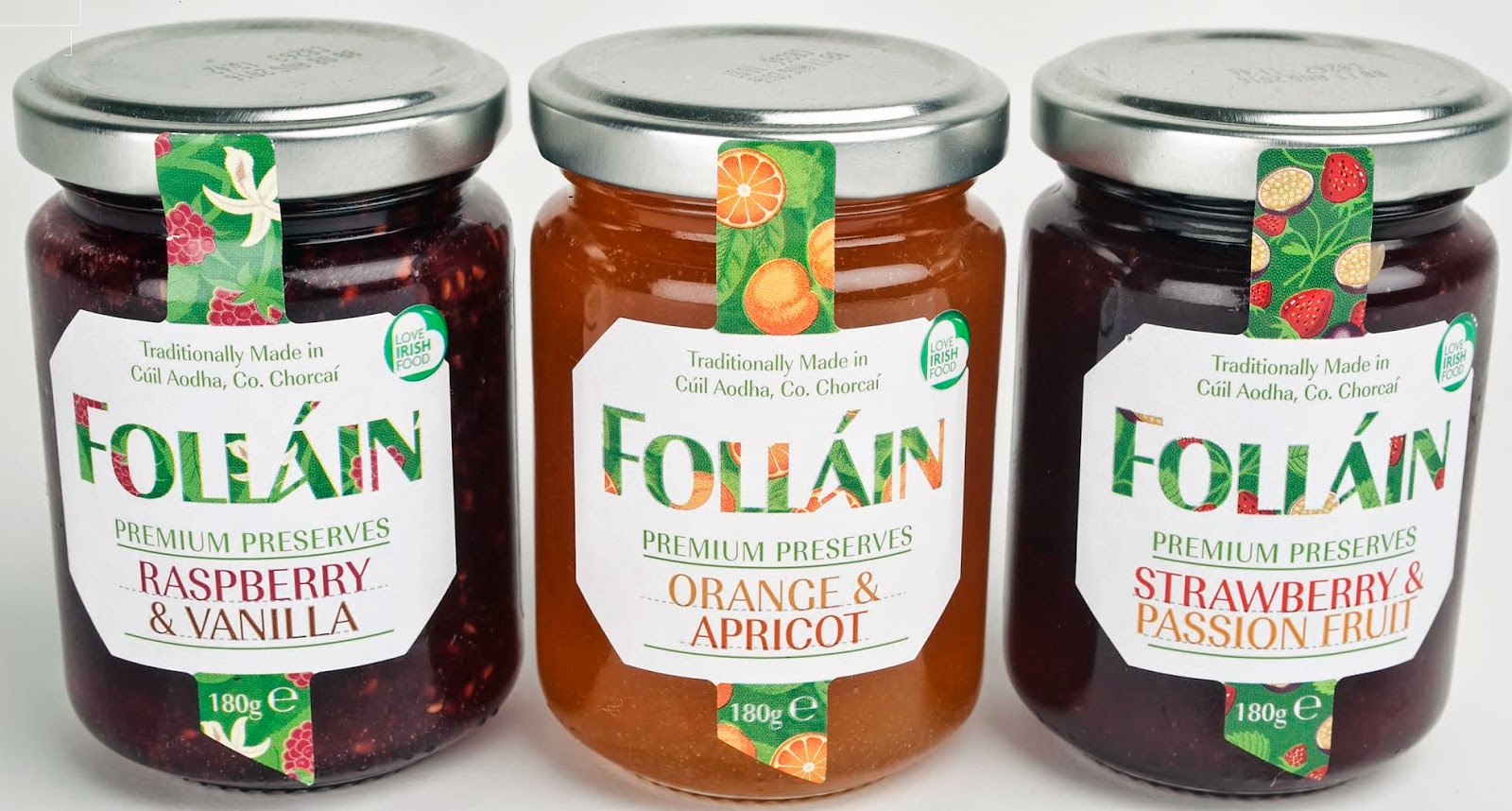 The summer of 1956 was the time of the milers with Ireland’s Ronnie Delaney learning a valuable lesson or two before going on to win gold at the 1,500 metres at the November Olympics in Australia. Englishman Brian Hewson was Delaney’s arch-rival during the long hot summer and that rivalry was often echoed in our “acre” between ourselves and a couple of young English boys, as we alternated between cricket and hurling.

The events stick in the memory as does another habit of the two lads, regular visitors from across the water to their Irish grandmother, a neighbour of ours. The two boys would come out of granny’s crossroads cottage with a pot of freshly made jam and a spoon and proceed to clean out the pot! I am reminded of them and indeed inclined to copy whenever I come across jams from Folláin, as I did recently.

Mrs O’K’s jams were good then;  Folláins are good now, always reminding me of the real thing. Been sampling three of their gourmet small pot range and I’m glad to say that they absolutely delicious. Raspberry and Vanilla, Strawberry and Passionfruit and, perhaps my favourite, Orange and Apricot, are so fruity, so full of gorgeous flavors, that an immediate re-run is on the cards.


While these small jars have a knockout flavour they also pack a different kind of punch where the target is the elimination of food waste, a problem estimated at costing Irish households €700 million every year.

Folláin Traditional Irish Preserves know what they are talking about when it comes to preserving the goodness of nature - they have been doing it from their West Cork base for over 30 years - the Irish company is now using their experience and expertise to help Irish people in the fight against food waste.

Folláin, with guidance from the Environmental Protection Agency (EPA) and Food Waste Tech super-stars, FoodCloud, have introduced smaller and less wasteful packaging across a new range of products, and combined this with a new website. The site will provide educational and consumer support, through tips on avoiding food waste, host a range of recipe ideas and suggestions to inspire consumers to get creative with surplus fresh food ingredients and stop food waste in its tracks!

Odile Le Bolloch from the EPA's Stop Food Waste programme commented: “When asked about the types of food they waste, many householders list condiments in jars along with the more obvious types of food waste such as fruit and veg, bread and dairy products, Our studies have shown that most of these foods are wasted because they have bought too much or didn't use it on time. Providing customers with the option to buy smaller amounts, as well as providing correct storage information, is a great example of how a company such as Folláin can help customers reduce their food waste, and we are delighted to see them take the initiative. "

Commenting on the starting point for Folláin Food Project, Folláin Brand Manager, Laura Hewson (same name as Delaney’s Olympic rival!), explains: “Preserving the goodness of nature is at the very essence of the Folláin ethos, and it is a craft that our Cork based team have perfected from providing the nation with fresh fruit Jams, Marmalades, Relishes, Salsas and Chutneys over the last 30 years. We knew as a company we wanted to get involved in the battle against food waste, and the start off point for us was a phone call to the EPA, where we were informed that chutneys and jams top the list of food waste offenders, but that something as simple as a reduction in packaging size could prevent jars of half full preserves being binned, so our first action was to do just that!”

Iseult Ward, Co-Founder of FoodCloud commented: “At least one million tonnes of food is wasted in Ireland annually. Wasting food is a waste of money, a waste of valuable natural resources and raises moral questions where there are people suffering from food poverty.  We want Irish people to think about how they can reduce this waste - with such a rich food and agricultural heritage, it makes sense that as a nation, we commit to this. It is great to see companies like Folláin looking for new and innovative ways to help consumers reduce their food waste at home.”


Hewson says the campaign resonates with Folláin: “Folláin’s tradition is imbued in the time honoured skill passed down through generations in Cuil Aodha, Co. Cork, of preserving fruit and vegetables, evoking the joys of nature all year around. In today’s throwaway society food does not carry the same value and preservation skills such as curing, drying, smoking, bottling, pickling, fermenting and conserving are not used as much. Folláin believes that new approaches can be adopted to modern day living fitting in with our busy lifestyles to value food as Irish people once did and become less wasteful. “
The Folláin Food Project Website includes information about food waste in Ireland today, with easy to follow guidelines on how to avoid food waste in the home, as well as utilising the list of top ten food waste offenders to demonstrate how you can save squidgy fruit and veg before they are relegated to compost heaps and rubbish bins.

And there’s more. Follain have created a series of recipes, which show people how to create beautiful dishes and avoid food waste at the same time and these are available to view here. Some going for the small family company from Coolea!