January 23, 2013
Woodside Free Range Pigs
Taste of the Week in this house came from Woodside Farm. Actually, the Conroy’s at Woodside could provide a taste of the week every week, even if they confined it to their Free Range Pigs, pedigree Saddleback and pedigree Gloucester Old Spot pigs.

Last Thursday in Mahon Point Farmers Market, I got a piece of Dried Cured Ham from Martin. He is in Mahon every Thursday and in Douglas every Saturday while Noreen is on duty in Midleton every Saturday.

We went pretty traditional with the bacon. Got lots of vegetables in Mahon but had no cabbage when Sunday came around. Up then to the local Supervalu and picked up an excellent head of Savoy, a terrific combination with the very flavoursome meat.

And all polished off with no worries about what was in the meat. Martin: “We cure our own bacon and make all our own sausages. We don't use any preservatives or stabilisers; because of this our sausages have a five day shelf life. We also make Pork and Apple Burgers which contain just Pork and Apple, these are also Gluten Free. We only sell meat from our pigs and don't buy in any meat and pass it off as our own. When you buy our products you can be sure you are getting a Truly Free Range Product.” 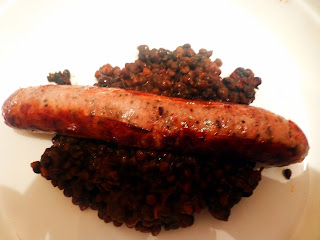 In recent months, I’ve been getting granola along with dried fruits (e.g., papaya, mango...) from Len’s Cereals, also in Mahon. But he has lots more, including Puy Lentils. Got a bag of those last Thursday. But what to cook with them?

Had been thinking of some lamp chops but instead decided to go with butchers sausages. So up then to the local Coolmore Meats in Montenotte. I found out that they don’t do their own sausages but the good news is that they stock O’Flynn’s Gourmet sausages.  No hesitation, bought a bunch and between them, the lentils and some sun dried tomatoes, we had quite a tasty plateful.

Mark’s Cheese in Mahon carries a range of Irish and European products but had no Irish sheep cheese for me last week. And indeed won’t have it from his supplier for another couple of months! So I settled for a wedge of the Spanish Manchego. 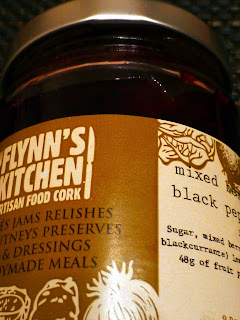 While in the Basque country last summer,  I came across the local sheeps cheese regularly in the restaurants and it was invariably served with jam (black cherry). Iain Flynn (Flynn’s Kitchen)  includes jams among his award winning products at the market and I bought a pot of his excellent Mixed Berry (livened up with black pepper and Kirsch) and that went down every well with the Manchego.

As you can see, the Manchego and the lentils were about the only non Irish ingredients in that bout of shopping but at least I bought them locally and had a lot of fun doing do. The more you go to the markets and indeed to your local shop and butcher, the more interaction you’ll have as they always have time for a chat or even a suggestion as to how to make the best of your purchase. Buy local – why not hit Mahon tomorrow? – and enjoy the craic.