I used to love that old Sam Cooke song and now I got another Cha Cha Cha in my life. For the past few days I’ve been sampling three Cha green teas that I bought from Fixx Coffee  in Dublin. 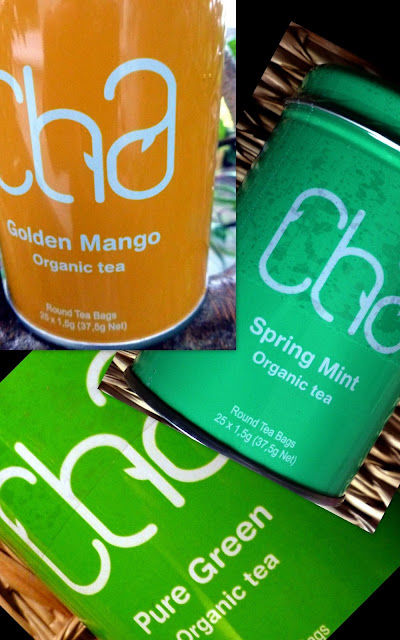 Cha Very Berry Tea received the accolade of a Gold Star in the Great Taste Awards 2012. They are handpicked and sourced from single estates at the foothills of the Himalayas. “Our Cha Teas are organic and certified by the EU Regulatory Authorities”.

Opened up the packet and picked the Golden Mango, with naturally extracted flavours of Mango and Vanilla, for the first tasting. The aromas were absolutely fantastic. But would they be too much for the flavours. No. Sure, I still savoured the smells but also loved the flavours. Wow. What a winner! A delicious flavour enjoyed either hot or cold, I’m told, but I haven’t tried it cold yet.

Then on to the Spring Mint. The aromas here were unmistakably those of spearmint, really cool and clean. A beautiful cup, fragrant and cooling. Must make sure I have some in for the summer.

The teabags are made from non chemical bleached filter paper and each tin contains 25 x 1.5g teabags (Tin Size 37.5g).

Finally, it was the turn of the Pure Green. Pure tea, boy, supple and dry, unhindered by any fancy flavours yet doing the job in a firm yet calm and relaxing manner. That it is full of antioxidants helps!

The teas were part of an offer on the Fixx Coffee site and naturally there was also some coffee on offer. I tried their Cubita Roasted Beans. They said this “is an exquisite coffee that has strong earthy tones, with a hint of smokiness and a caramel finish, it is the most popular brand of coffee in Cuba”.  Must say I agree one hundred per cent with the tasting notes here. A classic in a cup!

So now I move from Cha Cha Cha to Bolero: the music beating insistently out in the sun, load conversastions, a cup of cubita on the table and an eye out for the señoritas. Only an eye though as  mi señora, who also loves the cubita, is keeping an eye on me!