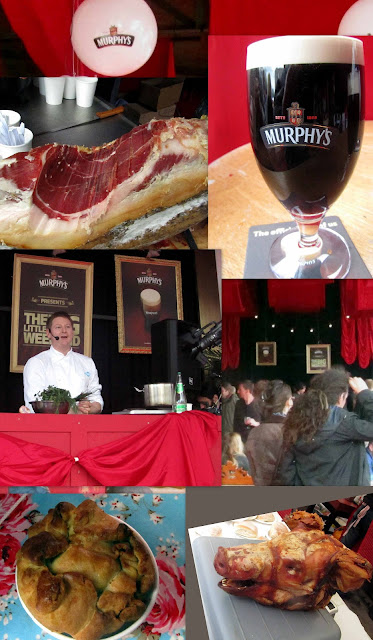 
You just got to hand it to Electric. When the South Mall restaurant joins in a project, they give it everything. They did it again last Saturday at the Food Market in Beamish's, as part of the Murphy’s Big Little Nights Out.

Quite a few food samples here from the various stalls but Electric chef Kevin was dishing out gorgeous slices of freshly cut Iberico (top left pic), the top ham of Spain, perhaps of the world. And then Kevin took to the stage and delivered a delightful demonstration of how best to cook the humble pig’s trotter, perhaps better known as the crubeen.

Kevin confessed to loving “getting the best out of the cheaper cuts” and I’m sure he convinced a few more to try it his way on Saturday. “You can feed six people easily for as little as a tenner” he said of the crubeens. And on cooking in general, had this sound advice, particularly with regard to vegetables, herbs and other flavourings: “Cooking is personal. Cook what suits you. Don’t just follow the recipe.”

And Electric's contribution didn’t stop there. The recipes sheets were handed out by Ernest and you had many chances of picking up their scratch cards which yielded prizes of drinks and bar food and even a full dinner at the buzzing South Mall restaurant.

It seemed a bit ironic to me to see the Murphy’s flowing in the haunt of its old rivals. In fairness to the brewers, the price of a pint was a reasonable four euro and, even better, you could get a half one (top right) for just two euro. Any chances that the local bars would follow that example?

Must say I really enjoyed my Murph’s, especially when I coupled it with a delicious pie from the Slice of Pie stand. Some great names there to go with the great pies: The Old Drunken Cow (bottom left) and the Price Paddy among them.

Lots of food available but you can’t eat it all. A pity, as I’d have liked to have had a cut off the T. J. Crowe bap. Other stalls doing brisk business were Wok ‘n Roll, O’Flynn’s Gourmet Sausages, The Crêpe Man, Uncle Pete’s Pizzeria, De Roiste’s Pudding, and the Grumpy Baker.

Happy going in and even happier going out when we presented with a couple of vouchers for pints of Murphy’s at any bar in Cork. Always room for a Murphy’s!
food event