Dining with Serge Blanco & A Town full of peppers 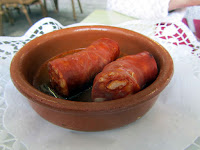 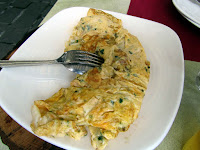 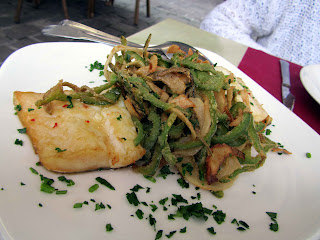 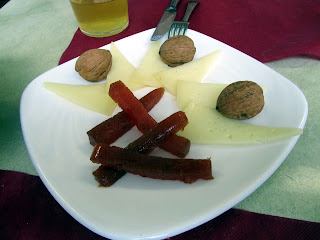 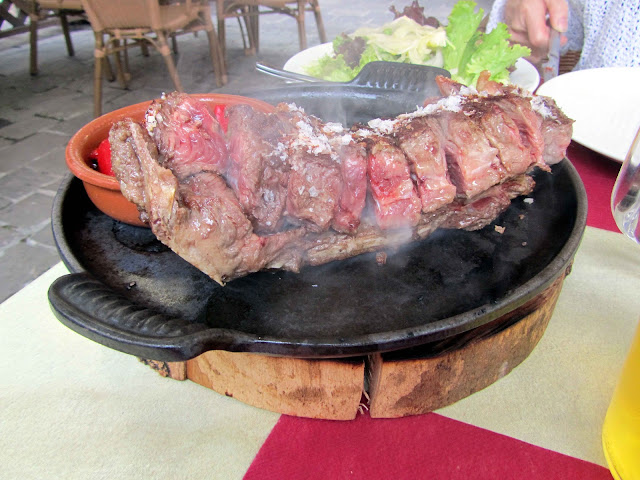 DAY 5
May 30th, Wednesday
More pics from this trip here

Lots on today but let us start at the end, in La Pinta, a restaurant, one of many businesses owned by former French rugby international Serge Blanco. We called up there this evening to his Bodega, Bar, Restaurant, Cideria, on the spit of land between the port and beach of Hendaye and signed on for the €32.00 Menu Cidrerie.
Basically, it was a five course meal. And over its course you were free to drink as much cider (from the barrels) as you could manage. Wow! From start to finish this was top notch and we enjoyed it very much.
Almost  as soon as we put in the order, a jug of cider (the cloudy dry local variety) and a basket of bread appeared on the table. Then came the aperitif: a spicy local sausage in a cider sauce.
Next up was the starter, a cod omelette. Never had a fish omelette before but this was the business. Cod also featured in the fish dish, grilled in the local manner and served with fried peppers and onions. Absolutely spot on.
Now for the big one as a smoking hot piece of beef still cooking in the pan was delivered to the table along with a plateful of salad and another of French fries. Cooked the beef bit by bit and ate away to our hearts’ content. Maybe I shouldn’t have mentioned the word heart here. But the beef was irresistible.
Time to close it out now, though the cider still flowed on. The final dish was a cheese, Fromage de Bebris, made from ewes’ milk in the nearby Pyrenees. A gorgeous cheese served with a quince pate and whole walnuts (with a nut cracker in the basket). A terrific finish to a very enjoyable meal. 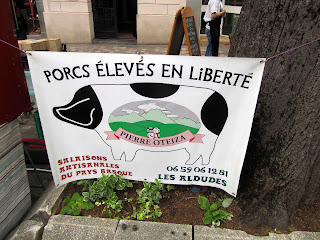 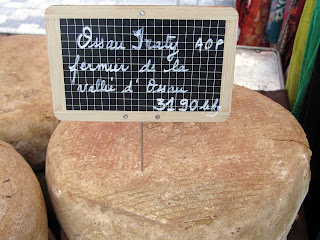 The day had also begun with food as we visited the Wednesday market in the centre of Hendaye. Found a free range pig farmer and got a few slices of his top notch cured ham along with a wedge of another famous local cheese: Iraty Ossau, also made from sheep milk. Other bits and pieces included a Black Cherry cake, strawberries and olives. 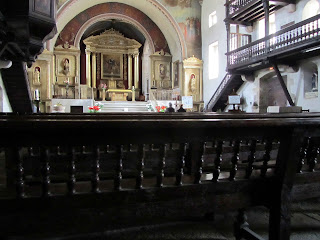 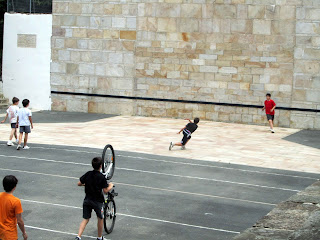 In the afternoon, with a cloudy haze coming in over the mountains, we aborted a trip to the top of the La Rhune mountain and visited a few nearby Basque villages, include Sare where we saw an unusual multi-galleried church and the more usual fronton (where kids were trying their hand at pelota, though without the racket). 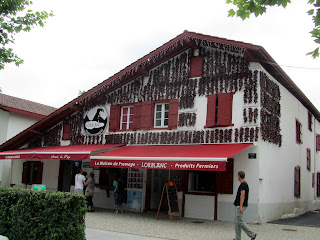 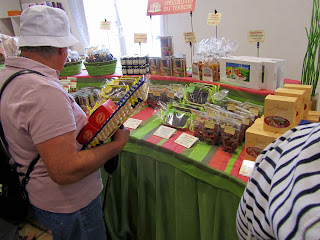 Then on to the village of Espelette, famous for its sweet red peppers which they hang on the walls to dry. They were on the Post Office wall, on the Spar wall, on the Hotel wall, everywhere. Got some at a local producer and a few other bits and pieces, including a first bottle of the local Txakoli wine,  before visiting a local chocolatier where we took on a bus load of pensioners and emerged  from the scrum with a couple of bags of the tasty stuff for ourselves.
2012 Basque Country France