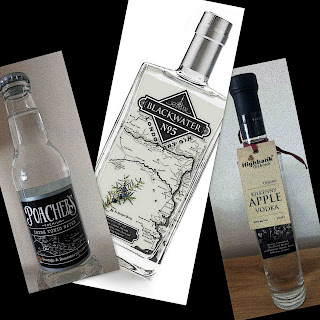 
If you’re used to vodka with little more than 40% abv going for it, you’re going to be surprised by this with its aromas and flavours of the autumnal orchard, an organic one at that.

The base spirit is made from their own apples and the vodka itself “lends a wonderful apple flavor to cocktails”. Use this in cocktails instead of your regular vodka and wait for the accolades.

This is 100% organic, single estate (grown, distilled and bottled at Highbank) and, yes, it is normal strength at 40%. Haven't got to the cocktail stage yet - waiting for a recipe specific to the product! - but I certainly enjoyed mixing it with Poacher’s Tonic, an excellent new Irish product.

Blackwater No. 5 Small Batch Irish Gin, 41.5%, €30.00 (50cl) Bradley’s
In quite a short time, Peter Mulryan Blackwater Gin No. 5 has become one of the most popular of the small batch gins now available in ireland. This London Dry Gin is not the only one that Blackwater produce and their latest, a strawberry one, was launched at the recent Wexford Food Festival.

Twelve botanicals are used in the process, including Coriander which goes “citrus-y” in the mix. Considering that citrus (dried skins) and bitter orange (also dried skins) are also used you could see why he advised against using a lemon in your gin. Lime would be a better choice. Juniper (the oil is extracted and used) is perhaps the best known element, having been traditionally used to make gin, and indeed provides the dominant flavour.

The No. 5 quickly gained loyal fans and Peter, from Conna in East Cork, was on his way. The gin is crisp and elegant with great flavour. They say “ it’s year round summer in a glass” and “liquid sunshine for the soul”. Add in quinine (via your tonic) and you have a most pleasant way of taking your medicine. Well the G & T was one method the British used to counter malaria!

Now that we’ve highlighted two brilliant Irish spirits (from two producers who have even more on their lists), we’d better guide you in the direction of a good tonic. And just in time, comes this excellent Poacher’s from County Wexford. It is based on a “rich spring water: that has “been pilfered and poached since 1825”.

Taste it on its own and you'll immediately see the concentrated quality. Put it up against a 39 cent can, Freeway Indian Tonic Water from Lidl, and you’ll know why you will pay more for Poacher’s which is in a different class entirely.

Mixing cheaper tonic with premium products is a waste of time, a waste of good Irish gin and vodka and a waste of money. I mixed myself two gins, one of each. As an amateur it took me a while to spot the difference but you certainly notice it on the finish. With Poacher's, the finish (when you swallow) lingers and lingers but the other one kills it there and then. The longer the flavour lasts is a sign of quality in both food and drink. Much longer, much better with Poacher’s. Go for it!