Happy Gaggle of Wine Geese at BT. Last of 2013 Events 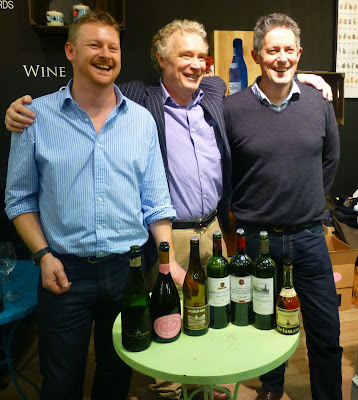 The last of the 2013 Winegeese events, celebrating Irish connections to the wine industry worldwide, was one of the best. Last night, at the Ballymaloe Pop-up Wine Shop in Brown Thomas, Limerick’s Dermot Sugrue of Wiston Wines in the South Downs and Wicklow winemaker Simon Tyrrell in the South Rhone were the stars of the evening, delightfully hosted by John Wilson of the Irish Times.

John’s well judged interventions were sprinkled with some wine wit by Cork’s own Maurice Healy, an ex Christian Brothers pupil, then a barrister and author. Healy, born here in 1887, moved to London after WW1 and it was there that his interest in wine flourished. Besides writing (often rather wickedly) on the subject, he also contributed to radio programmes and indeed Winston Churchill was one of his fans.

Dermot Sugrue started the evening, and a lovely one it was, with his own wine: Sugrue Pierre. He dabbled in beer and wine at home in Limerick as an adolescent before going to learn the ropes at Plumpton College in the UK. He started his wine making career at the famous Nyetimer, also in the UK.
In 2006, he decided to leave in order to fulfil his ambition of establishing a new winery in West Sussex, in collaboration with the Wiston Estate's Harry & Pip Goring. This wine though is his own, a blend of the classic champagne grapes, and awarded an unprecedented 96 points, the highest ever for an English Sparkling wine. It is a gem for sure.

He was at pains to point out that while the English wine is similar to champagne the local winemakers are all keen to stress that it is essentially an English sparkling wine, with its own character, and not a mere copy. They are to some degree helped by the natural conditions which results in low yields and very high concentration.

This was all underlined with his next wine, the 2011 Wiston Sparkling Rosé. This, newly released and in a miniscule quantity (compared to the big houses), had “great flavour, great intensity, all from a great year”.
Simon Tyrrell didn’t admit to any adolescent attempts at beer or wine making but he too ended up at Plumpton College before he and wife Emma set up their own wine importing business in Ireland in 2003, Tyrrell and Company.

Simon has a particular focus on the Rhone valley and it was there that he eventually achieved his ambition to do more than buy and sell wine and began to make his own. And the wine he showed last evening was the one he wanted to make, a good simple Cote du Rhone: Les Deux Cols “Cuvée d’Alizé” 2012.

Made with a blend of 55% Grenache 35 Syrah and 10 Cinsault, it is simply very good with a “great savoury balance”. Might well be one for the Christmas dinner. John Wilson wrote of the 2011 bottle: “An exceptional wine for the price, with wonderful fresh but rounded dark berry fruits, herbs and black olives. It has the substance to stand up to the full range of flavours but won’t dominate proceedings.”
John Wilson himself didn’t come empty handed. His first wine was the 2009 L’Abbeille de Fieuzal (Pessac Leognan), the second wine of the estate. Second wine but not second class. Made with 60% Merlot, 33 Cabernet Sauvignon and 7 Cabernet France, it “is a very good example of the vintage”.

Then we moved on to the Barton family and John told the story of a tasting he attended there where the big dog invariably tried to catch the spit of wine bound for the free standing spittoon on the floor of the tasting room. Wonder if that dog stayed sober.

Any dog that strayed into BT last evening would have left thirsty as we tasted the first Barton, the L’Impression de Mauvesin Barton, a lovely Medoc mix of mainly Merlot,with the two Cabernet grapes. And that was followed by a gem from St Julien, La Reserve de Leoville Barton 2008, a smooth elegant blend of 73% Cabernet Sauvignon, 23 Merlot and 4 Cabernet Franc.

And we finished off with a wee drop of Cognac. No, not Hennessy as you might expect, but Delamain. The original company was founded by Dubliner James Delamain but had its ups and downs after his death in 1800. Nowadays, it is one of the few family owned Cognac producers and is based in Jarnac. Despite the Irish connection, you won’t be able to buy it here but do watch out for it in duty free shops where the Pale and Dry XO turns up.

What will turn up in the Winegeese series next year? The three person committee – Colm McCann, Beverly Mathews and Maurice O’Mahony – are determined to keep it going. I’m told a major Californian vineyard will be in Cork in February. Watch this space! For now, well done to the three and their helpers and distinguished guests (local wine historian Ted Murphy was present again at BT). Joyeux Noël et bonne année.