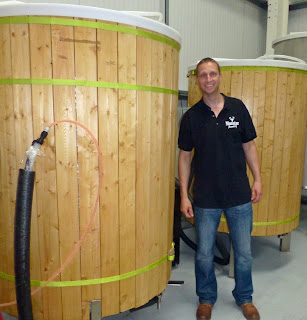 “The space is great,” said Padraig Hyde of Youghal’s Munster Brewery as he showed me around their new unit in an industrial estate above the town. “Now we have room to grow!” We are Padraig and Adrian his identical twin.

Padraig showed us the two tanks they started with, both 1,500 litres and both clad. Well, they really started with home-brewing! Currently, they make three beers, two lagers and a red ale, but, now that they have the space, expect more, maybe even a seasonal in time for Christmas. Their unit includes a brewery, a bar and a tasting room and they do tours here.

The Youghal twins are passionate about using local ingredients. And, to that end, have been growing their own hops. Weather may not have been ideal but the first harvest was fantastic and last year’s was excellent also. But the planting is very small scale and Padraig would love to see a local farmer grow the crop, promising that he would buy it. The two hops they’ve grown so far are Nugget (a bittering hop) and the well known Cascade.

Their 12 Towers red ale has just been certified organic, the first in Ireland, and the organic version should be in the shops by the end of this week. And those shops include SuperValu, No 21s, local pubs and speciality off licences. See the full list of outlets here.

The lads are fussy! And that works to the advantage of the customer. They don't use chemicals, “hate them”. They don't contract out the bottling, “we want to keep full control”. No shortcuts here. “Our lager beers can be conditioned for around three months.”

That evening I tried out my three beers, all good. But, first a word about their names. You probably all know that Blackguard means “troublemaker” and /or “messer”. The Fir Bolg (Men Belly - wonder if they had a brew or two) were the ancient inhabitants of Ireland while the 12 Towers was named (via a competition) after the towers of the town's medieval walls.

Munster Brewery Blackguard Lager, 4.2%, 500ml bottle
Lovely golden colour, cloudy, with fountain of bubbles. And in the mouth, it is crisp and refreshing, very approachable thirst quencher with more than enough flavour to easily distinguish it from mass-produced beers.

It is the only one of the three to come in a long-necked bottle. Water, malted barley, wheat, hops and yeast are the ingredients they work with. Enjoy this chilled. You might notice some sediment and cloudiness. Don't worry, all natural. Padraig’s and Adrian’s beers are all bottle conditioned.

Colour here is a deep amber. Flavours are somewhat stronger, “malt heavy and hop strong” they say, but nothing off the scale, very approachable indeed. Again this has been slow-lagered and aged. Flavoursome, mellow and refreshing with a bit more heft than the Blackguard. But both are well recommended. Lots of ales for sale in craft beer but not too many lagers and fewer still as good as this pair.

Again the Fir Bolg is bottle conditioned and the ingredients are the same. By the way, you’ll read on the label that yeast is an allergen.

This beer, with its earthy aromas, is well worth a try. It is billed as a hearty Irish ale and the mix of carefully selected hops and Irish barley (malted in Togher in Cork City) gives it muscle. It comes in a dark amber robe with fruity flavours and a toasty finish. Excellent on its own and should be great with food.

Did you know that quite a bit of Youghal’s medieval walls are still standing and that you can walk along them? Another highlight of Youghal is the 13th century St Mary’s Collegiate Church, still intact, still in use, and well worth a visit. After a trek around the old church and the walls, treat yourself to a pint of this superb Red Ale. Indeed, all three beers are excellent and went down well during the final of Euro16.