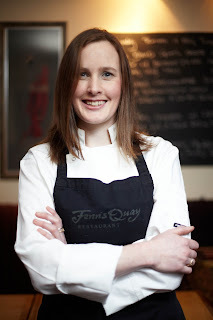 Head chef and proprietor of No. 5 Fenn's Quay, Kate Lawlor, will be on tenterhooks on the night of April 23rd when the winners of the Munster Region of Restaurant Association of Ireland Awards will be announced in the Imperial Hotel. Kate won’t be on her own as quite a few local restaurants have been nominated.

Her popular Sheares Street venue has been nominated for three of the most coveted awards in the Irish restaurant industry.  The Awards recognise achievement and excellence in the Restaurant and Hospitality Industry, and No. 5 Fenn’s Quay are nominees for Best Restaurant in Cork, Best Customer Service and Best Chef.

The Best Restaurant category recognizes ‘The very best in a dining experience, as evidenced by attention-to-detail, a well-structured, balanced and appropriate menu, exemplary customer service and suitable atmosphere’.

The Best Customer Service award goes to the nominee which ‘demonstrably goes above and beyond a normal level of service’ on a consistent basis, and the Best Chef is chosen based on the ‘approach, design and execution of dishes’ and their dedication to ‘push culinary boundaries in Ireland’.

Kate: “We are thrilled to have been selected as nominees for these awards. This is the second year in a row that we have been recognized by the Irish Restaurant awards, along with our 2012 nomination for Best Wine Experience. It is proof that our simple philosophy of using only the best produce from the best local suppliers, and treating it with careful attention to detail, is really paying off”.

Nominations for the Awards are made by readers of the Sunday Independent LIFE Magazine and members of the Restaurants Association of Ireland.  The nomination & awards selection process is also independently audited by KPMG to ensure that best practices & standards have been adhered to throughout the process.  It is a detailed and thorough process whereby nominated Restaurants face rigorous scrutiny from the Consumer, Regional Judges, a Mystery Guest Visitor and finally the National Awards Academy.  The All Ireland Awards are on Monday 10th June 2013 in the Burlington Hotel Dublin.

Alina said…
Great Post! But you might just want to try having the la cita b&b ,it would be really Interesting!