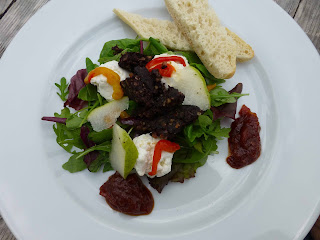 It was just about lunch-time when we arrived in Pat Shortt’s Bar in Castlemartyr last Saturday. The place was packed inside. Luckily, there were seats in the outside area by the local river, the Kiltha, and so, for the second time in eight days, we dined al fresco in Ireland! 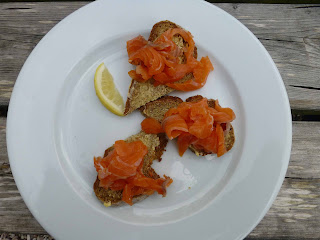 And we got good stuff. The starters were terrific. I got an ample helping of Bill Casey’s Oak Smoked Organic Salmon served on a lovely brown bread (€7.50). Bill is just down the road; chef Mike Hanrahan told me he collected the fish that morning. It tasted gorgeous, really impressed.


The local theme is strong here and was again well illustrated in CL’s starter: Ardsallagh Goat’s Cheese, black pudding, and pear salad, served on a bed of leaves with roast peppers and Ballymaloe Relish (€6.50). A terrific well balanced combination of textures and tastes. 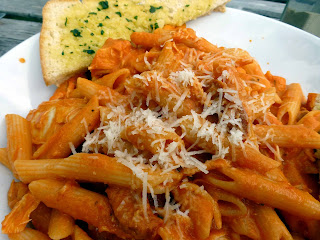 Had more than enough fries earlier in the week so had to give D’Unbelievable Burger a miss. Settled instead for the Chicken and Chorizo penne pasta in a tomato and herb sauce (€10.75). Quite a bit of chicken and it was first class, the real thing, and the sauce was brilliant and gave the dish a nice lift.


Polished it off in the sun and then crossed the road to the Village Greengrocer where Shortt’s get their veg. Just a few yards up is Clifford’s, his butcher. It was a busy afternoon but soon everything stopped as dozens and dozens of motorbikes came through the village. It was the members of the Gold Wing Treffen driving their bikes from Cobh to Youghal. Just another talking point on a terrific day in the East Cork area.