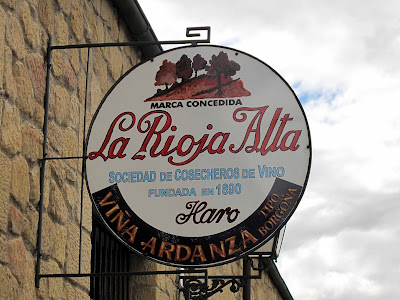 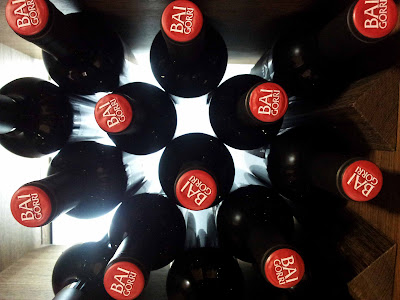 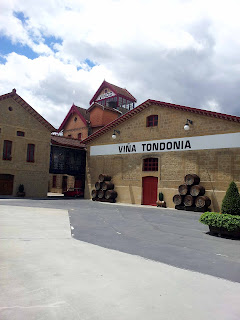 
With a showery forecast for Hendaye, we decided to take the trip to La Rioja where the forecast for this Tuesday was for marginally better weather. It wasn't blue skies all the way but it didn’t rain and we enjoyed the most fantastic wines between Haro and the medieval village of Samaniego.

The Spanish road system is just brilliant in these parts. We had been on the San Sebastian to Bilbao highway before but weren't quite prepared for the amount of tunnels when we turned off and headed for La Rioja, still on the toll roads. One of the tunnels, at 3405 metres, was the longest I have ever driven.

Haro, a small town, is regarded as the wine capital of La Rioja, as it was here it all started. Our first call was to La Rioja Alta, where they actually charge you for the tastings, anything from €1.50 to a fiver a glass. You don’t really want to be tasting glassfuls on a road trip, so we shared. Highlight here was the Reserva Vina Ardanza, priced at €15.49 a bottle. The lady who served us had polished off her English in Dublin!

Then off to the nearby Lopez de Heredia premises and their gorgeous tasting rooms. This is better known to us as Tondonia (though apparently Lopez has taken off in US). Highlight here was their incredible Tondonia Blanca Reserva (1996) and, of course, the lady who served us had learned her English in Dublin.

Then we headed towards Logrono looking for Bogedas Ysios but that journey was interrupted when we spotted the original glass cube of Bodegas Baigorri which marks their seven storey downwards building where much is done by the simple use of gravity. We missed out on a full tour but saw much of the operation.

And, of course, we visited the shop. Crianza, Reserva and “a vin d'auteur”, not the most popular with traditionalists, were bought and the lady that served us here broke the sequence. She polished off her English in Cork, having many happy memories of her stay in Little Island's Clash Road about three years ago!

Sunday was supposed to be very rainy in Hendaye and we did get 90 minutes of heavy stuff around lunchtime. Before that, we had walked the beach and seen the many surfers in action. Afterwards, we walked to Spain, as you would, if as here, it is just across a bridge. Checked out some of the nearby wine shops. Perhaps, we’ll call again.

Don’t think we call again though to any of those Ventas, the bargain places for French people, just on the Spanish side of the border. We did visit Ventas Ibardin on Monday. High on a hillside pass, with a great view of the French coast, including of St Jean de Luz, some years back they bulldozed away the trees and about 12 big buildings were set up for business.

They are mainly supermarkets, all selling much the same stuff, with some perfumeries and leather goods. We had been looking for shoes but the selection disappointed. Perfumes were priced much the same as on the ferry (Brittany Ferries) but bargains were found in one spot.

The alcohol outlets, some specialist, most in supermarkets, generally disappointed in terms of wine, though one specialist had a great selection of sprits. Did get a few bits and pieces but nothing worth talking about.

Indeed the only thing worth talking about was a spectacular thunderstorm that broke out while we were sitting in the car. We had come up through Spain and returned to Hendaye via France. Interesting but hardly profitable.
France La Rioja Spain Wine