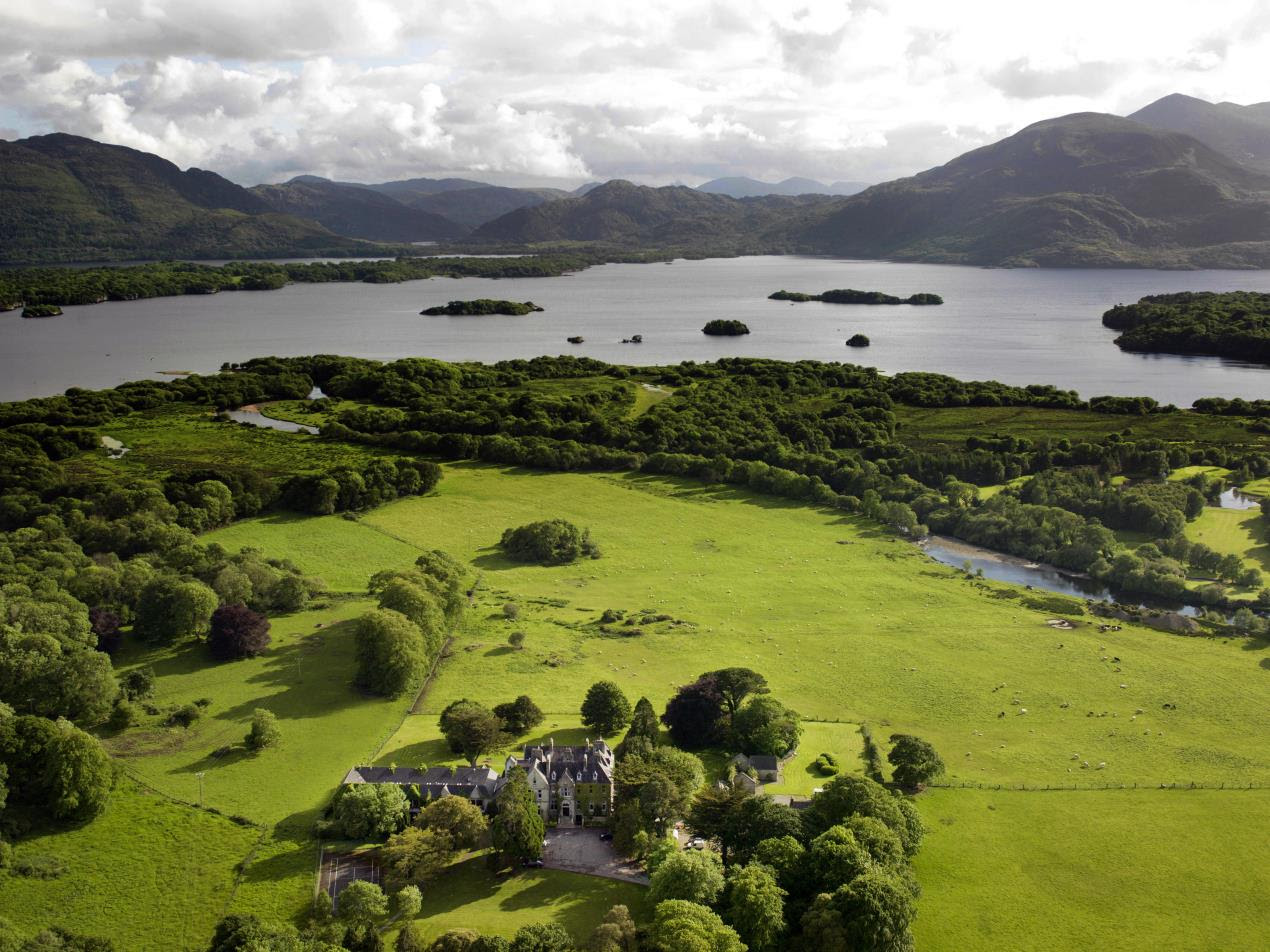 -HIKE AND HERITAGE AT CAHERNANE HOUSE HOTEL, KILLARNEY,              CO. KERRY
With the hope of better weather on the horizon and longer summer evenings ahead it’s  the perfect time to get those walking shoes on and explore the great outdoors. Cahernane House Hotel in Killarney, Co. Kerry is the perfect destination to explore the attractions that Co. Kerry has to offer. With its stunning surroundings, elegant and cosy drawing rooms and homely interiors, this country house hotel is a real life, Irish ‘Downton Abbey’.
The Hike and Heritage package(from €270 per person sharing) includes a 2 night / 3-day experience at Cahernane House Hotel . The package incorporates the rich and interesting history of the stunning 19th century, Cahernane House as well as giving guests the opportunity to explore the great outdoors including the nearby Killarney National Park and lakes.
This historical package will appeal to the culturally curious and includes breakfast and two evening meals along with a drinks reception on arrival, a history tour of the house and complimentary use of bicycles. A two course meal on your first evening will be served in the recently renovated Cellar Bar which is located deep in the heart of the Manor House.  The next day you will be given a packed lunch for your walk of Killarney National Park and walking maps of the area will be provided with advice given on the best route for your fitness level. Dinner on the second evening will be served in the multi-award winning 2 AA Rosette Herbert Restaurant.  Cahernane House Hotel is the perfect location to let history come alive and explore the best of Ireland’s landscape.
The house itself is reminiscent of times gone by and the charm in which it was built upon in the 1800s has never been lost despite the changeover of owner’s numerous times throughout its history. There are five main rooms on the ground floor of the property; the Pembroke Suite, the Herbert Restaurant, Drawing Room, Library and Reception. Each of these rooms contain historical artefacts and original antiques including items such as the Herbert Family Crest which is depicted above the front door of the hotel.
The house was originally built in 1877 by Henry Herbert and his wife Catherine. Many of the original pieces from the house remain in Cahernane House Hotel today, including the wooden staircase, the Killarney Davenport table in the foyer and the pillar caps in the lobby, which feature the first letters of each of Henry’s first four children’s names. His fifth child, Gwendolyn, was born the same year the house was built (August 1877) and the story goes that Gwendolyn’s ghost still roams the house on occasion!
Located just outside the centre of the thriving town of Killarney, the 48-bedroom Cahernane House Hotel is still far enough away from the hustle and bustle of Kerry’s major urban centre to offer a secluded and tranquil getaway. Situated on 6.4 acres of verdant grounds and on the edge of the Killarney National Park, the property offers a peaceful retreat from a busy world. Its neighbours include the magnificent Muckross Abbey, a 15thcentury monastery and Muckross House which is the sister property of Cahernane House and was once the residence of Henry Herbert’s brother.
Over €7.8 million has been spent on Cahernane House Hotel by the current owners, PREM Group, which has seen each of the manor rooms being completely renovated and restored. The renovation programme included the complete refurbishment of all of the bedrooms and the complete refurbishment of the original Cellar Bar, Library and Atrium. 8 more bedrooms are currently under construction in the old Coach House with works expected to be completed in May of this year. The house is a wonderful property, peaceful, elegant and a place where time has truly stood still.
PREM Group, also operate more than 40 properties throughout Ireland, Belgium, the Netherlands, France and the UK. The group is also renovating and extending some of its other properties including The Osprey Hotel, Naas, Co. Kildare and Tulfarris Hotel & Golf Resort, Blessington, Co. Wicklow. Over €2 million has just been spent by the group on renovations at The Hoban Hotel, Kilkenny and the Viking Hotel in Waterford.
Cahernane House Hotel is a member of Ireland’s Blue Book and was awarded the prestigious Condé Nast Johannsen’s Traveler Guide. The hotel also won an International Gold Award of Excellence for the best 4-star hotel in Ireland from CIE Tours International in January of this year.
For more details or to book the Hike and Heritage package now see www.cahernane.com or call Cahernane House Hotel on (064) 6631895.