Franciscan Well, the Cork-based brewers of the award-winning Rebel Red and Chieftain IPA, is proud to announce the launch of Pilgrims, its new 4% ABV Session Pale Ale.

Inspired by the pilgrims of the middle ages who were drawn to the waters of Cork’s Franciscan Well for its legendary miraculous and curative properties, Pilgrims Session Pale Ale goes against the grain of convention to deliver an array of unique flavours, with hints of mandarin orange and light fruit that are balanced with a gradual hop bite finish. 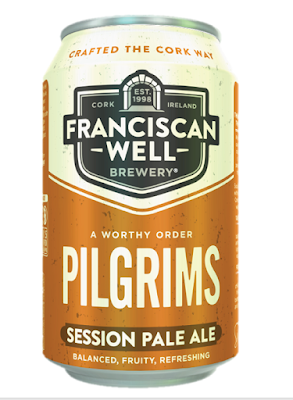 Franciscan Well Founder, Shane Long said: ‘Ireland’s Pale Ale category continues to go from strength to strength and we are proud to open a new chapter in Franciscan Well’s 21 year story with the introduction of Pilgrims Session Pale Ale.

We take pride in our heritage, in our roots and developing products that cater to the taste palette of Irish consumers.

With an ABV of 4% (and as its name suggests), Pilgrims Session Pale Ale is perfect for beer lovers who want to broaden their taste horizons. Best served chilled, Pilgrims is a great accompaniment to food and pairs exceptionally well with artisan meats and barbeque chicken.

Joining the award-winning Franciscan Well range of Rebel Red and Chieftain IPA, Pilgrims Session Pale Ale is now available on draught nationwide and will be available in a packaged range including 330ml cans and 4 pack and is due to launch in supermarkets and off-licences throughout the country from summer 2019.